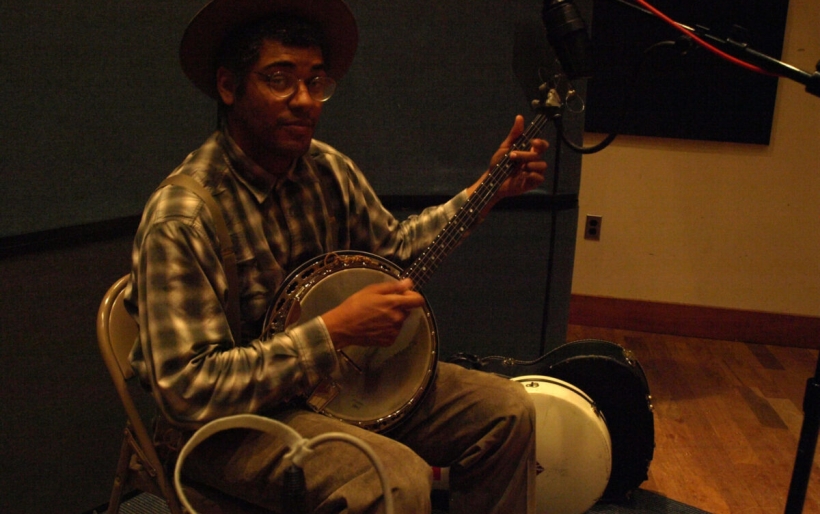 I had more than one fan-boy moment during our recording session with Dom Flemons back in June of this year. Sometimes I can’t help it, my excitement disrupts my normally cool professional exterior. It’s just that I love Flemon’s music a lot – from his work with his former group the Carolina Chocolate Drops to his solo material, like this year’s absolutely phenomenal Prospect Hill – so, it was a bit of a coup on our part to snag him into the studio. As a folk music enthusiast, I also can’t help from being fascinated by the past and how it affects the present, how music and musicians came and come together, how songs were and are formed, how they evolve over time, and so on. If I’m a student, Flemons is an encyclopedia. In his session with us, he took us through a crash course on fife & drum, ragtime, early jazz, blues, hokum, and honestly, probably much more. Flemons’ own originals sound as traditional and timeless as the traditional songs he plays. Around the week of our session, I had picked up the Oxford American’s latest music issue, in which Dom is featured as a writer on a truly interesting essay about Gus Cannon, an American blues musician of the early 20th century. I brought the magazine to the session to chat with Dom about it. This launched us into an enthusiastic conversation about Cannon, the blues, traditional folk music, and how all of this music ripples out and touches each other, influencing in its wake. A moment that summed up not only the session, but the mindset of Folkadelphia, maybe even the Folkadelphia philosophy, is when Flemons took out his cell phone to play an early recording of a traditional song. There we were, my audio engineers, Clark Conner and Eric Sanderson, Dom, and me, standing in the center of the live recording room, surrounded by microphones and baffles, listening to a cell phone play music from the beyond through its tiny speaker. Dom narrated and told us about the song, about its history, about other songs related to this one, about how his music fit in to the picture. I realized that that’s what we’re trying to do here with Folkadelphia; by using any means of technology available to us to relay to you what is interesting, exciting, historical, important, and amazing about folk music, past and present. If you can walk away from a Folkadelphia radio episode or concert or website or event having been amused, engaged, and educated, even a little bit, then I think we’re succeeding in our mission. Thanks Dom for reminding us why we do what we do.

Dom Flemons joined us in the WXPN Studio on June 15th, 2014 and played an album’s worth of diverse material for us. He returns to Philadelphia to perform at the Tin Angel this coming Tuesday, October 7th. For even more Flemons, check out his recent free Noisetrade sampler.