On Friday night, the TLA welcomed electronic pop artist, Charli XCX. The 22 year old English singer-songwriter released her debut album, True Romance in April 2013 but her biggest claim to success was from “I Love It,” the song she wrote and was performed by Icona Pop. “I Love It” became a #1 hit single in the UK and topped the charts in North America. Friday night, she performed backed by a band and group of dancers, some in Go-Go attire, others dressed like Catholic school girls. While Charli XCX’s boots were high and her skirt was short, she had no problem jumping up and down, clapping her hands and storming around the stage. The young and exuberant crowd enjoyed every minute of the hour and a half long set. Especially one of Charli’s newer songs, “Break the Rules”: it sounds like a teenage pop anthem with lyrics like “I don’t wanna  go to school, I just wanna break the rules”.

Opening act, Swedish witch house duo, Elliphantalso created quite a raucous. Including a rapper and a producer, the electronic hip hop act gave out stellar vibes, dancing around the stage and flapping arms like a bird. Despite not using any sort of instrumentation, they were still able to engage the audience. 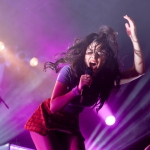 Setlist
Sucker
Breaking Up
I Love It (Icona Pop ft. Charli XCX)
Famous
Superlove
Black Roses
Lock You Up
Caught You in the Middle
I Need Your Love
Stay Away
You
Money (Barrett Strong cover)
London Queen
Break the Rules
Grins
Gold Coins