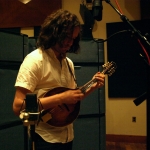 Over the past handful of years, the North Carolinian duo Mandolin Orange, comprised of Emily Frantz and Andrew Marlin, have been building and growing on their extreme talent and chemistry together, on the road and on record. Last year they released their most accomplished record yet, This Side of Jordan, via the Yep Roc Records label, a perfect home for this brand of genuine and emotional Americana.

As the band is frequently on tour, we were able to invite them into the WXPN studio this past May. For their Folkadelphia Session, they shared a number of songs from This Side of Jordan with us. In their session, like on their record, the band’s performances fall on the side of understated, often opting for silence that speaks volumes rather than over-the-top heavy-handed virtuosic picking and bowing. Don’t get me wrong if you think I’m saying they’re not top shelf musicians – they certainly are. Mandolin Orange are just tuned in to their sound and style, their voice, so accutely that they know when to pull back and let it sink in and also when to dig in and blow you out of the water. That’s a skill not easily gained.

Let Mandolin Orange show you what I mean, listen to their Folkadelphia Session right now.