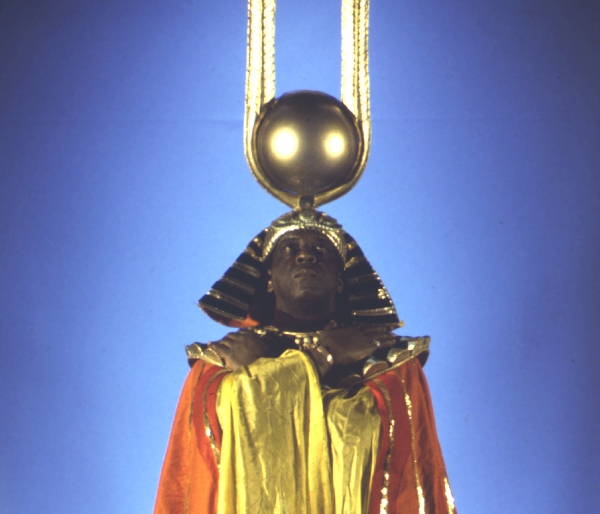 How did that big band squeeze into such a small space? Well, that was the case when the Sun Ra Arkestra performed a Tiny Desk Concert at NPR Music on Halloween. Led by 91-year-old alto saxophonist Marshall Allen, the eight piece costumed Arkestra huddled around one microphone and a couple of ambient room mics and performed four songs: “Along Came Ra”/”Zoom,” “Queer Notions,” “Angels And Demons At Play,” and “Interplanetary Music.” The fantastic energy is noticeable from the first second the Tiny Desk Concerts starts and then escalates into a full blown jazz happening.

This year would have been Sun Ra’s 100 birthday. Born in May, 1914, in Birmingham, Alabama, Herman Poole Blount’s claim that he was from Saturn and not from Earth, fueled his work as a composer, bandleader, poet, philosopher. He lived on Morton Street in the Germantown section of Philadelphia from 1968 until his death.

In related Sun Ra news, there’s an excellent new collection recently released called Marshall Allen Presents Sun Ra and his Arkestra: In The Orbit of Ra, a twenty song collection of Sun Ra’s music covering a period of 25 years. Lovingly curated by Marshall Allen, the longest member of the Sun Ra Arkestra (55 years), In The Orbit of Ra, is an excellent place to start if you don’t own any music by this musical genius. The band is currently wrapping up a tour in Europe.