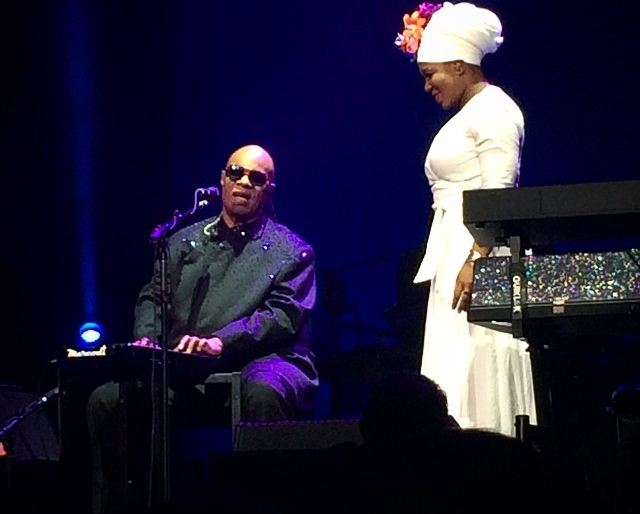 Stevie Wonder strolled onstage at the Wells Fargo Center last night to thunderous, celebratory applause. As he sang the opening lyrics (“Good morn or evening friends/Here’s your friendly announcer”) to the first of the 21 songs – “Love’s In Need Of Love Today” – that make up his masterpiece Songs In The Key of Life, exhilaration took hold, and jubilation continued throughout the evening.

Wonder began the Seventies with the hit song “Signed, Sealed, Delivered, I’m Yours,” and never looked back. Songs In The Key of Life, released in 1976, was the fifth in a run of now classic albums that included Music of My Mind(1972) , Talking Book (1972), Innervisions (1973) and Fulfillingness’ First Finale (1974).

Of the album, Greg Kot, co-host of Sound Opinions and critic for the Chicago Times, says:

it served as a summing up of virtually every musical style that fascinated and influenced him, from classical and funk to jazz-fusion and Latin. Its themes were just as kaleidoscopic, an exploration of what it means to be human: Love and loss, childbirth and death, innocence and innocence lost, faith and spirituality, heartbreak and joy, set against a backdrop of racial inequality and inner-city turmoil.

Last night at the Wells Fargo, the ages and colors of the crowd were as diverse and eclectic as the music from the album they came to see Wonder and his (upwards to) 42 piece band perform. The core of the band featured Wonder at center stage behind his Vintage Vibe Vibanet keyboard, harmonicas and Yamaha grand piano. Surrounding him, spread across a wide open stage were three guitar players, a seven piece horn section, three keyboard players, two drummers, two percussionists, a bassist, a twelve piece string section on songs like “Village Ghetto Land,” and “Pastime Paradise,” and six backup singers, although the backing singers swelled to 14 on “Paradise” and the encore. He took time to introduce his longtime keyboardist and music director Greg Phillinganes, bassist Nathanial Watts, and drummer Raymond Pounds.

The entire evening was a show of epic proportions. Stevie and the band were playful and seemed to have as much fun as the audience. On some of the songs, like “Pastime Paradise,” “Summer Soft,” and “Have A Talk With God,” he performed faithful album versions of. Even as faithful as these were, the mere presence of Wonder singing these live was transcendent. The crowd leapt to their feet on the first notes of “Sir Duke,” and “I Wish.” His version of the instrumental “Contusion,” was a jazz fusion tour de force. With help from his stellar backup singers, trading vocal solos, Wonder turned “Ordinary Pain,” into a celebratory gospel tune. During “Black Man,” he acknowledged Philly songwriter, producer and musician Kenny Gamble, and Wonder dropped a line from McFadden & Whitehead’s “Ain’t No Stopping Us Now” into the mix. He introduced “If It’s Magic” about how and why he wrote the song. “I wrote this song in about two hours,” said Wonder about “Magic.” “I was thinking about the word magic and what it meant to me, and the most magical thing to me is love.” He then went on to talk about the harpist Dorothy Ashby, who played on the original song, and his version of it brought this writer to tears.

After a 15 minute intermission, Wonder brought singer India.Arie out on stage along with his daughter and back up singer Aisha Morris, who we got our first taste of, when, as a baby, she was featured on “Isn’t She Lovely.” Even though the lyrics to his songs speak volumes about the human condition, he took time to talk about the need for greater gun control. As the evening wound down to the last two songs on the album, “As,” and “Another Star,” the evening grew in intensity, exuberance and lots of funk. “As” was executed beyond rhythmic perfection. After “As” Wonder excitedly yelled “Let’s do this!” into the microphone and without skipping a heartbeat, the rhythm section and percussionists launched into “Another Star,” the audience singing the familiar “la-la-la-la-la-la-la-la-la” as the razor sharp horn section burst in. The syncopation took control of the crowd, lifting us up to a spine-tingling, not soon to be forgotten, rock and roll moment.

For Wonder’s encore, he took on the alter ego of DJ Tick Tock Boom, sampling some of his hits like “Do I Do,” “Master Blaster,” “For Once In My Life,” “My Cherie Amour,” “I Just Called To Say I Love You,” and closed the night with a full version of “Superstition.” At 64, Wonder has never sounded better. True to the lyrics of “Ngicuelela – Es Una Historia – I Am Singing,” during which he played an extended harpejji solo, this was a show of “songs to make you smile,” and “songs to make you sad.” During the show last night, Wonder truly sang of love, of a hopeful tomorrow, singing someday love will reign.

Below, check out the set list and some videos from the show.