Folkadelphia’s Year-End List of Discovery and Wonderment, Part I

For the last three radio episodes of 2014 (airing Wednesdays 10-11 PM ET on 12/3, 10, and 17), Folkadelphia will be recapping what we found extremely special, utterly entertaining, and downright mesmerizing from this year’s musical offering. Pulling together my thoughts and my music for the exercise, it got me thinking further…

What do we do just before The End? We reflect on what has passed and we assign weighted values to experiences and memories based on subjective importance and personal determinations. I think it gives us peace of mind on the verge of what’s next. We all do this on a smaller scale at the end of each year during what is called YEAR END SEASON. Then afterwards we wipe our collective hands clean and resume holding them outwards and open hoping to catch what will come in 2015. Don’t you just love this time of year, when everyone dusts off their music/film/literature critic hats and ranks the definitive, the ultimate, the best in ART? It’s great.

Cynicism aside, the end of year coupled with the Internet’s need to organize everything into lists does have its benefits. Like the enthusiastically hopeful gold digger panning on the river bank of a deposit, every so often we, the people, sometimes happen upon a nugget of undiscovered (by us) goodness. For every fifty blogs that will put the super obvious, obnoxious, and omnipresent albums on the top of their lists, praising them as if they were being paid or threatened to, you might stumble upon one publication where you find out about something fresh and new. As such, I like to use this time of year as a time of discovery rather than reflection, like an uncharted map rather than a stupid mirror. Maybe you do this too – high five!

So in keeping with this spirit, I am attempting to collect in one place some (in fact, very few) 2014 albums, artists, and songs that you may have missed, you may have forgotten, or that you didn’t hear in the first place. As Folkadelphia is a folk-music-ish radio show and organization, we have a bent in that direction.

Welcome to Folkadelphia’s Year-End List of Discovery and Wonderment, Part I:

Founded and run by Josh Rosenthal, Tompkins Square has become an essential resource for discovering and rediscovering musical gems. Through their ultra specific compilations, archival releases & reissues, and curated brand new releases, TSQ continually impresses. It’s amazing that some of these releases exist, I’m not sure in whose garage they were rediscovered or how they were lost through the cracks in the first place for that matter, but boy am I sure we have them now.

This year’s catalog releases give you a good read on how this label operates: a reissue of a tiny but significant 1971 fiddle record by George “Smoke” Dawson, a collaboration with Smithsonian Folkways to reprint the rare Dillard Chandler a cappella album (originally released 1975), a debut album from mid-twenty year old Ryley Walker drawing from heroes like Tim Buckley and Bert Jansch, but much more modern, and a collection of black sanctified and gospel singing recorded between 1926-1936, culled from Christopher King’s private 78 rpm collection, just to name a few. Navigate their Soundcloud page for even more.

Myriam Gendron’s Not So Deep As A Well 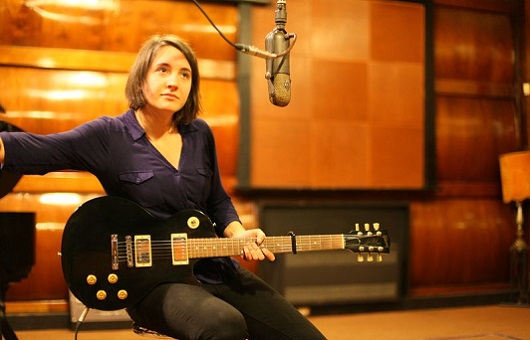 Back in March, I received an unsolicited email from Vincent Bancheri who runs the Portland, Oregon record label Mama Bird Recording Co. about Myriam Gendron, a Montreal located artist who had herself sent an unsolicited note and album to the label. Bancheri was “blindsided” and “floored” – strong words to describe anything really, so I was intrigued, plus Mama Bird has a proven track record with a catalog that features folks like Saintseneca, Quiet Life, and Vikesh Kapoor. It becomes very clear very quickly what he meant; Gendron magically weaves the poetry of Dorothy Parker together with her own musical sensibility, one that is at a moment tender and the next fierce, overflowing and overwhelming with emotion.

But the album is not at all over the top – it’s a subtle experience, all of this feeling and emotion is behind the bucking gates of restraint. One of my favorite parts of the album is that every single second feels crucial and it because of this detail-oriented approach that you find yourself fading into the world that Gendron creates (especially with headphones on!) Sometimes when we think about songs, we forget about silence and space, and how their interaction with sound is vital to the dynamism of music. Gendron deftly commands your attention not only with her flowing voice, but with the space between words and the pauses between verses. I find myself more whole for having listened to Myriam Gendron. Hopefully in 2015, she will add more US tour dates to the sole debut live appearance of this year (lucky ducks in Somerville, Mass.) 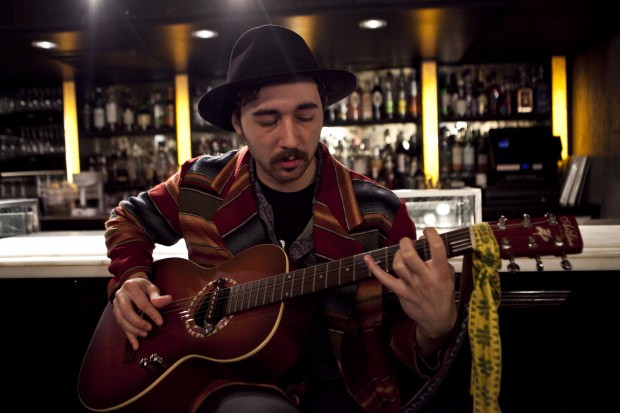 Okay, granted Folkadelphia comes from a bit of a biased place with this recommendation, especially since we produced one of his projects, but I think I’m objective enough to convince you that Philadelphia’s Mitch Esparza is worth your time. We’ve known Esparza since our time attending Drexel University together and we were always impressed by his tremendous output and the sheer speed at which he would conceptualize, create, record, and release music. It’s a little scary. Over the years, Mitch has collaborated with too many people to think about, led various groups, and donned a multitude of performance personas: The Love Club, ((taco)), ME, Mitch Esparza, Faceporn, the Krautrock Kid, Little Mitch Esparza, and probably a few that I can’t remember or never learned.

This year (so far since we still have a few weeks), Esparza released three albums. First came Pearls Dissolve in Vinegar from his psychedelic rock outfit, the ever-morphing Love Club, mostly tracked live at PhilaMOCA. Next came an experimental solo release LegS, recorded in part by fellow experimental musician Bhob Rainey, showing off Mitch’s love of droney guitar-centric compositions. Finally, Folkadelphia collaborated with Mitch on a Spanish-language record El Desecantamiento de Maria Sabina in which he reinterprets, reimagines, and rescores songs that were important to him growing up in Mexico and now as an adult in the United States too. The common threads that binds each album together are the present ferocious energy and willingness to try ideas, characteristics that I find rare in music, but that come naturally to Esparza.

Tune in to WXPN tonight at 10 p.m. EST for Folkadelphia’s first of three year-in-review shows, and check back next week for another roundup of Discovery and Wonderment from 2014.