A 2014 retrospective with The War On Drugs

A 2014 retrospective with The War On Drugs
Artists

A 2014 retrospective with The War On Drugs

It isn’t really surprising that The War On Drugs are topping so many best-of lists with this year’s Lost In the Dream. Paste. Rough Trade. SPIN. Top tastemakers around the world are praising the Philadelphia band on their third full-length effort, a follow-up to 2011’s equally mesmerizing Slave Ambient.  They sold out venues from Australia to Toronto and circled the globe once or twice, armed with two new members and a transcendent live rendering of the album’s many layers and moods.

So to celebrate a wonderful year and a wonderful record we’ve gathered together some of the band’s biggest moments; join us as we take a look back at the banner year that was 2014 for The War On Drugs.

The first murmurings of Lost In the Dreamcame in early December of 2013, with the band releasing “Red Eyes” as a single and announcing some details for the record.  “Red Eyes” was a shock to the system after not hearing from the band for almost a year, earning “Best New Track” status from Pitchfork.

March opened up with a fun video for the single, featuring the band as a panel of judges at a talent competition that has some unlikely contestants.  The video was a refreshing and surprising mood shift for them, uncovering the laid-back, humorous side to their personality. 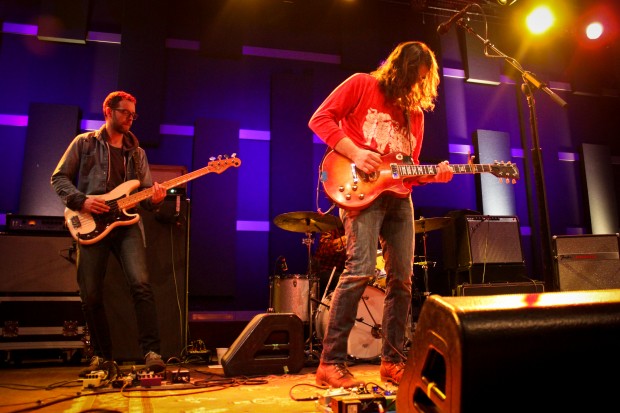 A sold-out Free at Noon followed, marking the very first time the new material was played live.  While in the XPN building frontman Adam Granduciel sat down with Michaela Majoun to record a World Cafe interview, eventually airing on April 18th (and archived here).

The fun-loving streak continued on March 16th when Boot & Saddle welcomed an unknown band called Dead Greg to their stage.  Turns out it was The War on Drugs undercover, playing a secret show to prep for the impending release of Lost In The Dream and subsequent world tour.

Lost In the Dream dropped on March 18th to instant acclaim and the band set off on what would become almost ten months of constant touring.  The first night was a sold-out Union Transfer gig that certainly was a night to remember – Granduciel’s father was in the audience, seeing his son’s band for the first time, and the crowd was filled with friends and fans old and new and Kurt Vile stepped on stage to help out on “Brothers.”

Between tours, The War On Drugs made appearances on The Late Show With David Letterman and Conan, stopped back in Philly for a set at the seventh annual Roots Picnic, played festival after festival on almost every continent and squeezed in interviews at almost every stop.  Drummer Charlie Hall played quest quizmaster in NPR Music’s Name That Drum Fill challenge, bassist Dave Hartley shared his tour playlist and Granduciel put together a tour photo essay for T Magazine, giving us a beautiful glimpse into their road life.

September gave us another sighting of Dead Greg, this time at Johnny Brenda’s as the band got ready for the next leg of touring. Then things took a strange twist at the Ottawa Folk Festival when Mark Kozelek fired shots at TWOD during his set – Kozelek and the War on Drugs had parallel time slots at nearby stages and the former got a little upset when the Drugs’ music overpowered his own. The ridiculous beef, mostly fueled by Kozelek, dragged on through October with the Sun Kil Moon musician penning two “dis-tracks.”

Currently back in Australia, Granduciel and co. are already looking ahead to 2015 with worldwide tour dates scheduled through the spring. But if we learned one thing from the band’s approach to all that 2014 had to offer, being the biggest band in the world hasn’t changed who they are – they still call Philadelphia home.