mewithoutYou come Home for the Holidays at Johnny Brenda's

Home for the Holidays: mewithoutYou throw a winter warmer at Johnny Brenda’s
News

Home for the Holidays: mewithoutYou throw a winter warmer at Johnny Brenda’s

We’ve got a lot of good ways to be festive here in Philly, during the holiday season. Some people prefer Christmas Village or ice-skating at Penn’s Landing, but I humbug those in favor of something a little different. This year and last, I’ve been participating in a new tradition: grabbing a few dear friends and heading over to Johnny Brenda’s, to see local legends mewithoutYou play an annual, intimate holiday show. 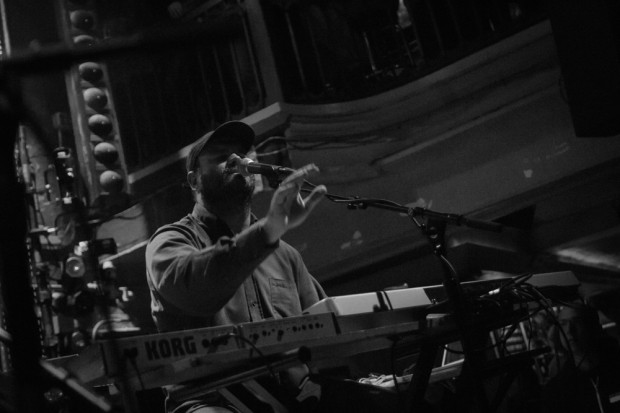 If the ragged line that formed a bit before doors was any indication, those of us who had tickets to the very sold out gig were pretty damn excited—I certainly was. After a smooth set from local discordant joywave vibe duo Pattern is Movement got the audience warmed up, the excitement was palpable during the set change. JB’s was filling up nicely, and the crowd was getting cozy in the space.

Hitting the stage shortly after 10, Aaron Weiss and the crew got right into the thick of things, with Ten Stories ripper “Fox’s Dream of the Log Flume.” Transitioning into sing-along “Timothy Hay” was a welcome crowd pleaser, and got fans interested and participating right off the bat. The middle of the set was packed with that beautiful heaviness that only a band like mewithoutYou can pull off. Despondent deep cut “Silencer” had us screaming ourselves hoarse as guitarists Mike Weiss and Brandon Beaver put down the crushing riffs that lend credence to Aaron’s depressing elucidation that he doesn’t do much smiling, anymore (highly ironic, as he seems happier than ever, of late).

About halfway through the set, there it was. A brand new song. A lot of us had expected it, but I hadn’t gotten my hopes too high, just in case they chose not to go for it. But it really did happen, and it was absolutely fantastic. With a couple rounds of “ready?” passed from member to member before hand, the band premiered a new track called “Red Cow” from their upcoming sixth LP. It’s a straight-up call-to-arms in the name of rock, driven by that pounding progressivity that hallmarks their early releases, with Weiss alternating between yowling yells and exquisitely wrought spoken words overtop. It looks like those who favor A→B Life and Catch For Us the Foxes might have a bit of a return-to-form to look forward to, in next year’s LP6.

Coming down from the excitement of a new song, the band closed out the normal set with lighter board of fare, featuring Ten Stories B-Side “Julian the Onion.” Before going, Weiss—wearing a hat that would make even grumpy ole Jeff Mangum smile—thanked a lot of people for being there that evening, supporting the band and everything they do. He ran through his traditional list of shoutouts and special thanks, and it seemed that many of the bands parents were to be found in the crowd (and could be spotted smiling and singing along, throughout the night). 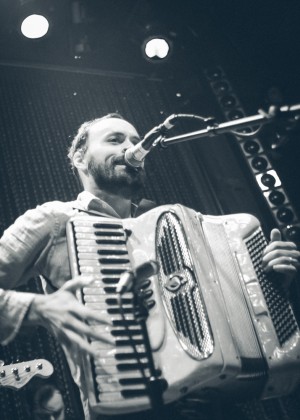 The encore left absolutely nothing in its wake. The band put everything on the table, and we ate it all up. Weiss even wrapped one of Johnny Brenda’s beaded strings from the wall about his neck like a faux rosary, after it came loose during one of his frenzies. The one-two knockout punch of “January 1979” followed by “Torches Together” had the audience surging, raging and matching Weiss yell for yell in ferocity. He played that expertly, leaning into the adoring crowd as they came forward for him, sharing the mic with front row friends, and even stage diving for a little bit in “Torches.” After a raging jaunt like that, the only thing left was to release any leftover emotions.

The cathartic, joyful refrains of “Allah, Allah, Allah,” and “All Circles” found me sobbing and singing along with gusto, with my arm around the sweat-soaked shoulders of one of my most cherished friends. These are the moments that keep me coming back to see mewithoutYou, time after time after time. This band, this city, these people—this is what it truly means to be home for the holidays.

Setlist:
Fox’s Dream of the Log Flume
Timothy Hay
The Dryness and the Rain
C-Minor
Silencer
Aubergine
February, 1878
A Glass Can Only Spill What It Contains
“Red Cow” (new, from LP6)
A Stick, a Carrot & String
O, Porcupine
Julian the Onion (Ten Stories B-Side)
Nine Stories