mewithoutYou & The Districts go incognito at the Church

They Do Not Exist, We Faithfully Insist: mewithoutYou & The Districts go incognito at the Church
Events

They Do Not Exist, We Faithfully Insist: mewithoutYou & The Districts go incognito at the Church

So that’s the end of my 2014 year in shows. Slammed into a bank of monitors, screaming at the top of my lungs, sweat-soaked, sobbing and experiencing more than a little bit of real pain from the crushing. But some band called mewithoutYou once told me that “the cure for pain is the pain itself,” and even a few bruises couldn’t keep me from having an absolute blast at the Church on Tuesday night. I didn’t even really know who was playing, just saw a couple of random bands called “Eight Legged Prawn,” with “Thy Foes Profanely Rage” on a cheap Church bill promised a decent night of entertainment. 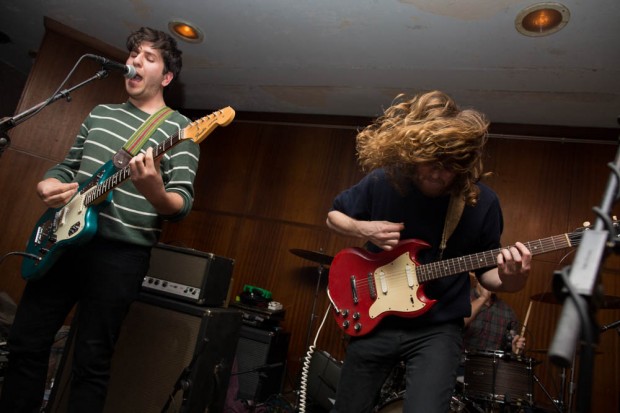 First up was Lithuania—the side project of Eric Slick (of Dr. Dog) and Domenic Angelina (from DRGN King). Formed in 2005 as a duo, the band remained mostly dormant for the better part of a decade, coming out of hibernation as a roaring four-piece this past year to put together a proper release: the Domesticated God 7”.  The fast-pace fuzz jams were a great way to get in out of the cold, and get warm by nodding the ole head a bit. Dom really went all in, too, giving the colorful playmat carpet of the Church’s stage the thrashing it deserved as he leaped about, blasting out the jams.

“Are you guys excited for, uh… Eight Legged Prawn?” Slick asked during a break in Lithuania’s set. The audience laughed and cheered a bit, in reply. “How about Thy Foes Profanely Rage?” came the next query in a Monty Python-esque accent. “Awww, who am I kidding? It’s The Districts and mewithoutYou, guys.” he finally admitted before launching into the next song—that got a proper response from the packed crowd. The Church was sold out, and nobodies don’t just up and sell out the Church. It might have been the worst-kept secret show in recent memory, but that didn’t diminish even slightly how intense the night was.

“Eight Legged Prawn” played their part well enough. Even though they’re young (Can we please stop talking about The Districts age, every time they get press coverage [I’m looking at you, Time]? I’m sick of it. They rip, that’s all that matters.) as a whole band, they’re no strangers to the stage. From the main stage at the Susqheuanna Bank Center to a North Philly basement, Rob Grote and the crew have proved over the past year that they’ve got the chops to take them anywhere they need to go. Last night’s set was another notch on their accomplished résumé, rollicking through a tight set of their bluesy rock. 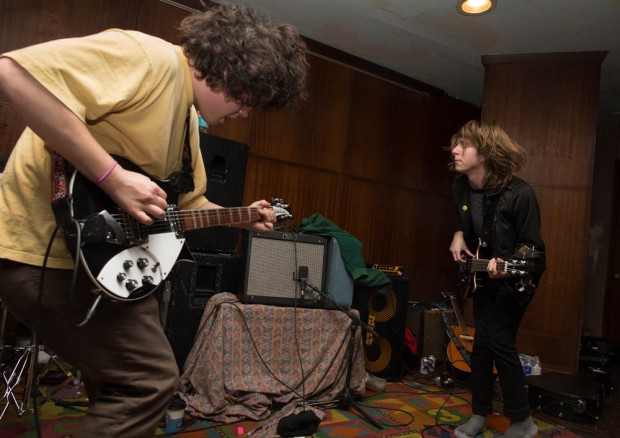 With a setlist full of new material from their upcoming LP A Flourish And A Spoil to show off, The Districts didn’t waste any time at all on banter—which was fine by those of us who were enthralled by new and old numbers, alike. My personal highlight of the set came at the end, when Grote went solo on a taped-up acoustic guitar to play new song “Suburban Smell,” quietly raging against the inwardly directed pains of growing amidst the tolerated mediocrity of the middle class. As much as I really do like the solo- and riff-forward tracks that make up most of Telephone and the self-titled EP, it’s reassuring to see that A Flourish And A Spoil won’t be singularly focused on that. The acoustic ballad led into their last song: a sprawling, enlarged version of their solid standard “Young Blood,” with Rob spending a good portion of the song standing on his amp, jamming the hell out, before leaping off and stumbling back to the mic to thank the audience for their time.

After a snappy set change, a ragged five-piece appeared on stage, with outfits dripping with Clark Griswold-ian dadcore and the Church’s tiny stage packed with more eclectic instruments than even a band of gypsy minstrels would know what to do with. Get a load of this guy up in front with his battered acoustic guitar and Jeff Mangum hat. Who do these “Thy Foes Profanely Rage” guys think they are? Definitely not Philly post-hardcore titans turned indie-troubador-darlings mewithoutYou. Nope. It was definitely not mewithoutYou. 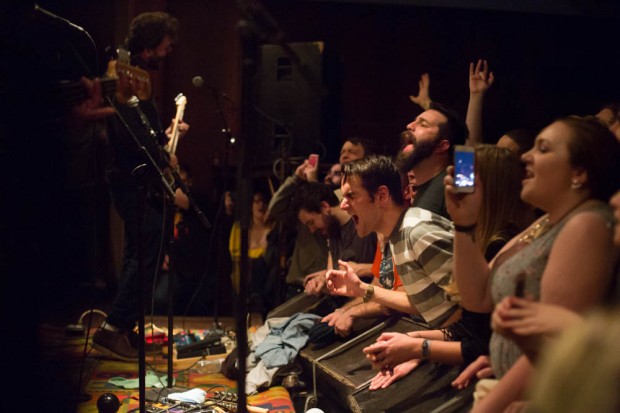 The band proceeded to play a sonically massive—even by the Church’s standards—set, covering each and every one of mewithoutYou’s albums (even the one that hasn’t been released yet). Foes and kids alike were raging Tuesday night—in both sacred and profane manners. Whether you got sad and bitter when they dredged up “Gentlemen” and “The Cure for Pain” from the downcast A->B Life, or went the holy route, screaming about “what a beautiful G-d there must be” during “Timothy Hay,” there were plenty of choice moments for both early and late era mewithoutYou fans to revel in.

It wasn’t—as many, myself included, had suspected—a secret show to show off a ton of new material from the upcoming record. They played new jammer “Red Cow,” for the second time, after premiering it on Sunday night at Johnny Brenda’s. After hearing it live twice (and an ungodly amount of times from this low-quality video on repeat), 2015 is shaping up to be a good year to be a mewithoutYou fan. “Red Cow” is definitely “Torches”-esque material, even though the track title sits squarely in the modern day of mwY songwriting. I wouldn’t be surprised to see this land as LP6’s new single, before we even know it.

For all intents and purposes, it was a normal mewithoutYou show—a deeper than usual cut of songs for the setlist, but normal, none the less. Normal, as to say that the extraordinary spectacle that is any mwY gig could ever never be reduced to such a simplifying term. Fans, screaming and reduced to tears at the same time. Aaron Weiss flipping and prancing about the stage, laying down massive existential truth bombs in his lyrics and scattering microphones and mic stands in his wake. Monumental sonic landscapes, constructed by the talents of wildly charismatic drummer Rickie Mazzotta, the ever-chill Greg Jehanian on bass, and determined guitarists Mike Weiss and Brandon Beaver. 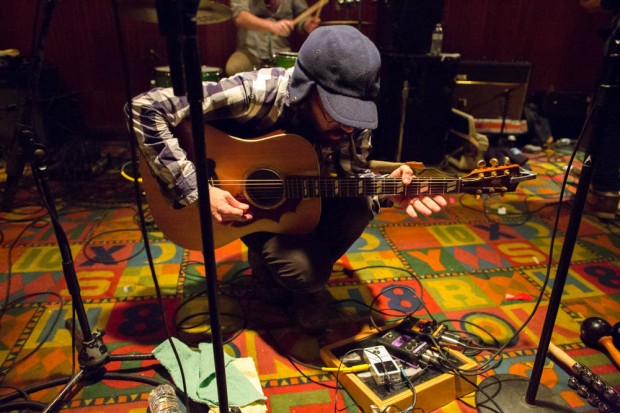 If you haven’t ever seen a mewithoutYou show, you’re doing yourself a huge disservice. The band is a huge credit to the Philadelphia music zeitgeist of the past decade, and absolutely critical to music as an enlightened art form.

Wrapping it up with existential-crisis-in-a-bottle “In a Sweater Poorly Knit,” mewithoutYou/Thy Foes Profanely Rage questioned their own existence on several levels. Thanking the crowd and a small list of friends, Weiss bid adieu and launched into spiraling chorus “All Circles,” to bring the heavenly evening to a roaring end.

Whether you came to see the Districts rattle and shake, or lose yourself in the paradox that is mewithoutYou, the show was undoubtedly a success. Philly is a world-class music city—and if you’re reading this, I don’t need to tell you that. But with rocket-propelled bands like the Districts shooting for the stars, and hometown heroes like mewithoutYou to remind people of that staying power, 2015 might just be the year that Philly music broke something other than my heart.

Encore:
In a Sweater Poorly Knit
All Circles