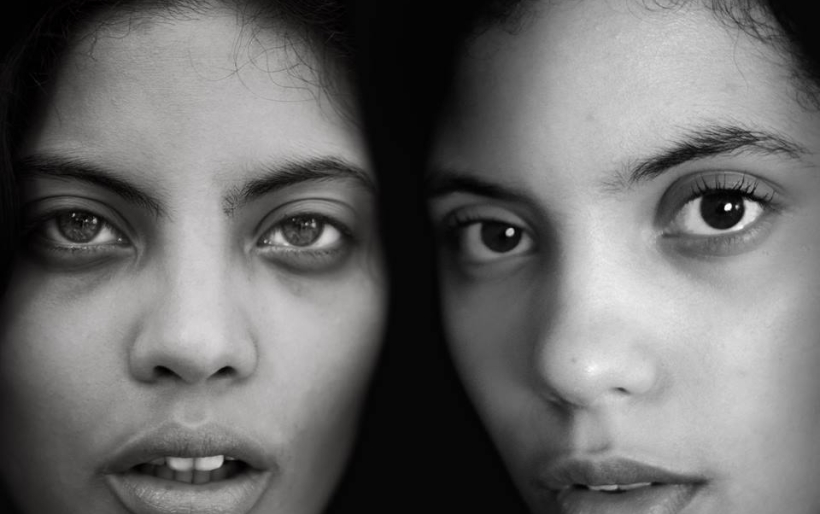 Ibeyi } Photo courtesy of the artist

Say goodbye to 2014. Hello 2015. It’s always a challenge to look into the rock and roll crystal ball and predict the future of great musical discoveries. But there are signs. Here’s ten artists I’m excited about and look forward to hearing more from in 2015.

Oyinda
London born Nigerian singer, songwriter, producer, and Berklee School of Music grad Oyinda will leave you breathless. Her moody, striking, electronic based soul music brings to mind the mid-tempo sultry sounds of Sade, The XX, Massive Attack, and Jhene Aiko. She’s an exciting new musician, with endless potential, a gorgeous voice and magical sound. Oyinda released her four song EP, Before The Fall, in early November. The songs on it are sparse, yet beautifully produced, and leave a lot of room for her soothing, seductive voice.

Leon Bridges
Fort Worth, Texas soul, R&B, and gospel influenced singer-songwriter Leon Bridges is a name you want to put on your radar. Bridges caught the attention of Austin Jenkins from the band White Denim in a bar in Fort Worth. Jenkins, and along with White Denim’s drummer Josh Block are currently working on a debut record by the 25 year old Bridges. By the time SXSW rolls around in March, we suspect they’ll be some serious drooling over this talented young man.

Tobias Jesso, Jr.
With some strong support from Pitchfork and Pigeons & Planes, Vancouver based singer-songwriter Tobias Jesso, Jr.’s music has begun to surface. Jesso is a piano man with a breaking heart, and his songs are reminiscent of early Todd Rundgren, Nilsson, and a little Randy Newman. His album, Goon, is out March 17th on True Panther and features production by Patrick Carney, John Collins (The New Pornographers), Chet “JR” White (formerly of Girls) and Ariel Rechstaid (Vampire Weekend, Haim) in Los Angeles. Mark your calendars now: he’s playing Boot & Saddle on March 25th. Sounds like: only love can break your heart.

Ibeyi
Ibeyi is the French/Cuban musical duo featuring twin sisters, Lisa-Kaindé and Naomi Diaz, the daughters of the late legendary percussionist and Buena Vista Social Club member Miguel “Anga” Díaz. Their debut is out February 17th on XL, and it’s a knockout collection of otherworldly world music, where Yoruba folk sits aside electronica and elements of hip-hop and soul. Simply stunning.

Rae Morris
London born, 21 year old singer and Rae Morris has been working on her craft the last several years. With a couple of EP’s to her credit, some guest singing with Bombay Bicycle Club and Clean Bandit, Morris will fit that perfect slot right in between Florence Welch and Stevie Nicks. Her full length, Unguarded, arrives on these shores at the end of January.

Madisen Ward and the Mama Bear
One band’s name that was the first one out of the mouths of at least a dozen people I spoke to who were at the Americana Music Awards in October was the Kansas City mother and son duo of Madisen Ward and The Mama Bear. Mama Bear is the Sixty-something Ruth Ward, and with her son, they sing some of the most honest and heartfelt folk music I’ve heard in some time. Everybody form a line.

Black Honey
Not much is known about Black Honey yet, however the UK band have been turning heads with their sexy, fuzzy, indie guitar pop. Signed to Duly Noted Records the band has released one EP. Musically, they sit somewhere between Ride and Temples.

Shamir
Shamir is a 19 year old rapper, singer, songwriter, and musician from Las Vegas and he has already received endorsements from some highly respected music sites including Billboard, Pigeons and Planes and was recently nominated by BBC Radio’s Sound of Music 2015. Shamir’s music is a mix of funk, hip-hop and electronic music with a spirited, fun vibe. Signed by XL Recordings, he released his debut EP Northtown to significant buzz and is working on his debut full length.

Marika Hackman
British folk singer, songwriter and multi-instrumentalist Marika Hackman is poised to break out. Like Laura Marling and Beth Orton, she’s tapped into acoustic music in breathtaking ways. She’ already released three mesmerizing EP’s and her full length debut, We Slept At Last, is out on February 15th, on Dirty Hit Records (home to another new artist, Wolf Alice, that are also getting a lot of attention lately).

Boots
BOOTS is singer, songwriter, guitarist, and producer Jordy Asher. Unknown to many, that changed significantly when Beyonce’ released her now year-old self-titled album and it featured songs written and produced by BOOTS. Since then he’s been touring and slowly releasing new songs on his Soundcloud. While his association with Beyonce may set up a perception of what his solo music is like, that’s not the case. Informed by rock and electronica, he’s a riveting live performer, as a recent opening spot for FKA Twigs at Union Transfer proved to be the case.