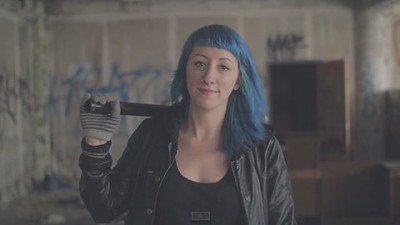 For the full-throttle punk track “Scott get the Van, I’m Moving,” Philly punk trio Cayetana got to run around an abandoned warehouse smashing glass, vases, or anything they could get their hands on with a baseball bat.

The video, which was directed by Adam Peditto, features tantalizing sunlit reflections on an old-fashioned van and slo-mo shots of the destruction during the chorus. The video is far from missing any symbolic anecdotes like a snapshot of a sign on a brick building that states “The Future is Unwritten.” Dark shadows on the trio are fitting in times of lyrics like “We find solace in the moment.” A strange, dark silhouette at the end leaves the viewer in the unknown and makes this video more than just a recording of the girls rocking out in a basement (which is still pretty cool).

The track comes off their 2014 release, Nervous Like Me. The punk-rock three set will be featured on an upcoming compilation – To Show That You’re Still Here: A Benefit Compilation for the American Foundation for Suicide Prevention – which is set to come out February 24. The comp features other Philly artists like Leaky Soups, Beach Slang, and the now-defunct Secret Plot to Destroy the Entire Universe. Cayetana is on tour with the Sidekicks until mid-March and you can check out their video below via NPR Music.