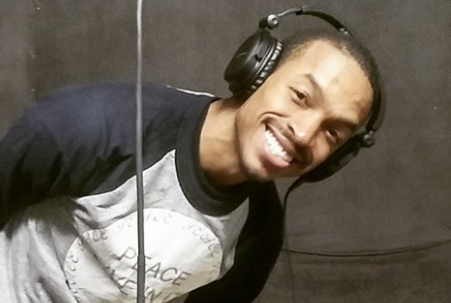 Amir Richardson might come off as an underdog. That’s because he is. Known in the Philly hip hop world as The Bul Bey, he recently released his debut album with Illvibe Media, titled Shaking Hands and Kissing Babies. And although he’s been making, writing and releasing music since 2007, he refers to this album as his “formal introduction to the masses.”

He’s coming out of his shell and Richardson, 27, admits that he sometimes thinks it took him a while to get to this point.

Without completely cuing the Fresh Prince, Richardson is a homegrown West Philadelphian who’s been shaped and molded by his experiences in the city, both good and bad. Shaking Hands and Kissing Babies is largely a product of this upbringing – one laced, quite honestly, with paranoia and fear.

“I think, in a lot of ways, it made me more paranoid. It made me more skittish— just awkward, I guess, in terms of being a social person” Richardson said. “I remember learning early on from my grandfather, and I even said it in the song ‘Fourthcoming,’ he told me, ‘everything teaches.’ That’s always been something I’ve carried with me.”

Growing up on Salford Street, a small block off of 60th St. and Kingsessing Ave., Richardson realized something about the city that he’s carried with him all of this time: tough love.

“I think Philadelphia gets a reputation of being tough, being hard, being cruel, being coarse, being cold and callous and things like that,” Richardson said. “But, I feel like on the flipside of that, there’s a genuine love to the city.”

Where does he channel that? Into excitement, sorrow, and a rawness that’s all his own, heard best on tracks like “Where I’m From.”

“But it’s just genuine. When there is love involved, then we really, really go hard and we really love it. But we’re not going to sugarcoat anything, and if there’s something we don’t like, then we’re going to say that as well. Growing up in Philly, that attitude is in there. The excitement on the track called ‘Preview,’ that’s a real, legitimate, heartfelt excitement. The sorrow or little melancholy emotion on ‘Forward’ is real, genuine…”

Richardson started the album at the top of 2013, and basically ran around the city like a madman, recording at various places like Park House Studio and SoundButter Audio. The album title itself is in indicative of Richardson’s outlook while recording.

“I didn’t have a big budget. I don’t know anybody special or in particular. I’m not the favorite nephew of so-and-so, or I’m not down with this group over here,” Richardson said. “I literally just worked really hard, went out and met people, collaborated with likeminded people.”

Those likeminded artists (Pac Div, Leon Tomas, Ganou, Code 9, Davon, Mickey Factz, Faylin Johnson, and Dahi Divine) are sprinkled throughout the album. Richardson said his favorite track has to be “So Much Further to Go,” featuring Faylin Johnson, on which he also worked with San Francisco producer Tito Tunes.

“[Tito Tunes] took this Cuban horn and he flipped it, and he just did all of these things with the sounds,” Richardson said. “I mean, since that moment, I never calmed down since listening to it.”

Calm is hard state to find Richardson in. After listening to the album once it was completed, he wondered if he rapped a little too much.

“I felt like I had to prove something, in the back of my mind. I had to make a statement, and let people know I’m to be reckoned with.”

The Blu Bey performs at Ortlieb’s on Thursday, March 5; tickets and more information on the 21+ show can be found at the XPN Concert Calendar.