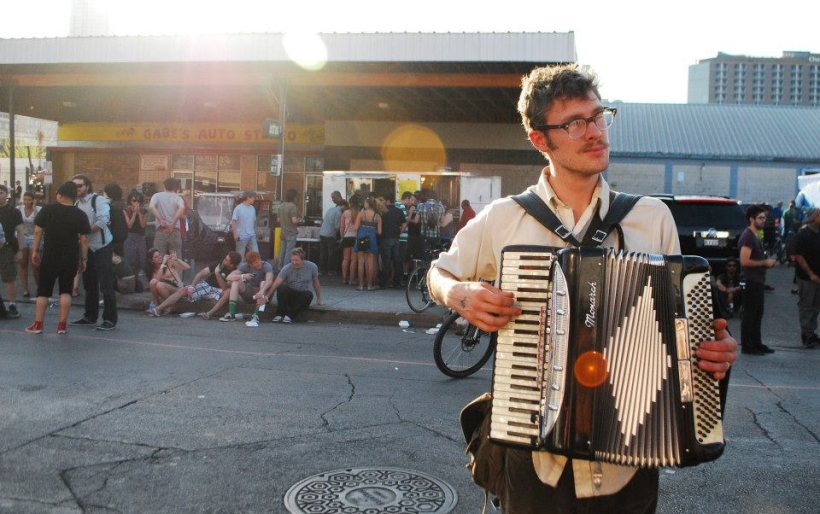 When he’s not traveling around the world as the keyboardist and multi-instrumentalist with The Lumineers, Stelth Ulvang follows his own muse as a solo artist.

Stelth recently released a solo album, And As Always, The Infinite Cosmos. It’s a collection of honest, warm, and sometimes wonderfully quirky acoustic based songs, orchestrated by Richie Greene along with a 16 piece chamber orchestra with many members from Portland State University. Ulvang is a confident singer, an imaginative lyricist, and on the album he gets musical assistance from some excellent players including Nick Jaina, and Paleo (AKA David Strackany). Ulvang’s Infinite Cosmos is a mildly eclectic record, and has some of the same musical elements that remind me of Illinois by Sufjan Stevens, including the song arrangements, the story telling, and the overall warm and live sound of the record.

So, about The Lumineers? In an e-mail Stelth told me:

Wes is actively getting the structures while we wait patiently in the wings to start building the songs back up. I can’t imagine the pressure he’s got on him, but at the same time, dude is cool as a cucumber – similarly, I think it will be impossible for the bands we’ve played with, and listened to the last few years to not have influence and adaptation in the Lumineers sound, but our value of recordings being able to start with a good song, is still there-recording starts this summer

Ulvang plays with a quartet on Sunday (3/8) at World Cafe Live, with Sean Hoots and Tom Bendel, and Eric Slick opening the show. Go here for tickets and more information about the show.

Below, stream his Stelth’s album and watch him perform “Carl Sagan; About The Orbits of Others,” from his new album.