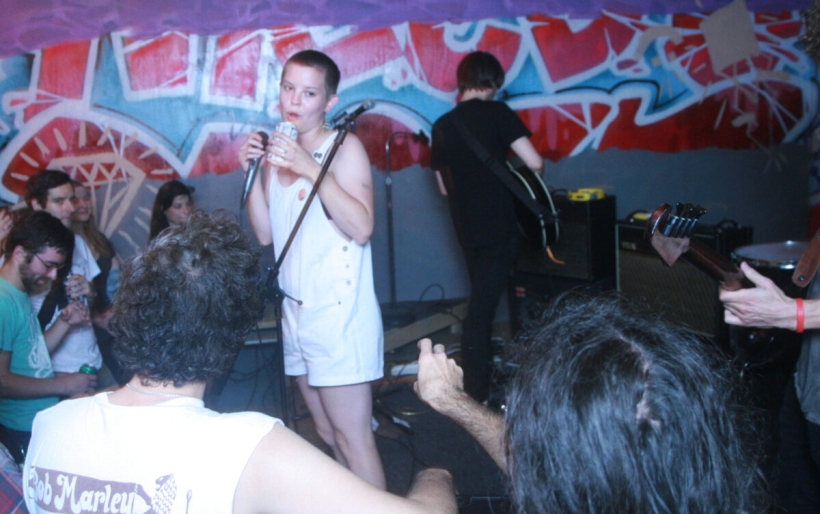 Party Photographers at The Ox in 2010 | Photo by John Vettese

In the wake of West Philly’s celebrated Golden Tea House closing its doors this winter, I’m torn between nostalgia and the hope that it’s not some trend of unconventional, all-ages venues throwing in the towel. In my heart of hearts I know that every time a DIY venue shuts down a demon gets it’s bat-wings or something, and there will be five more to take its place in a year or so. I hope so, anyway.

An intense show at the dearly departed Terrordome | photo via myspace.com/terrordomepa

This article will reminisce about the show houses that, in my opinion as a lowly musician, have dominated the Philly DIY “scene” the past four or five years. May this also be a rallying call to any person out there thinking about doing something similar: do it!

Get a PA, book a few bands to play in your kitchen or basement, make a rad flyer, invite everyone you know. You’ll be so happy you did, and if you just keep at it, this city will support you and you can eventually become as awesome (or more so) than the places in this article. GO!

In no particular order:

Danger Danger Gallery – Tris from Grandchildren was main person I recall from this legendary home on 50th and Baltimore (It had started at 47th and Warrington as early as 2005). I think this is the longest running show house/houses I’ve personally seen in the city, and boy did it have an awesome array of bands come through. Also the most legitimate of set ups. There were no neighbors to complain, and they owned the property so no landlord could pitch a fit. I miss this place and can only hope that it returns one day. I know several times they had three “stages” going; one in the basement and two upstairs. This lent itself to throwing shows with more than 4 or 5 bands sometimes. They stopped hosting shows in 2011 and announced they’d be re-opening along with the building next door, teaching music lessons and with a retail space etc. Nothing has come of that yet, at least not that I’ve heard of. The place had a knack for hosting touring acts that grew to cult status like Dan Deacon, Vivian Girls, Tune Yards, The World is A Beautiful Place And I Am No Longer Afraid To Die & Bardo Pond among so many others.

Golden Tea House – This house at 40th & Baring holds a special place in my heart, so I’m biased. My band Love Club played our last show there, before our guitarist Alex Wilson moved away. The band I took Alex’s spot in, Humanshapes practices/lives/recorded our 1st EP there. I’ve also seen it host some ridiculously cool acts. I’m pretty sure I’ve been to a few other shows before it was ever Golden Tea House, but my memory is foggy because of beer. A lot of my own personal music collection the past couple of years has come from seeing bills at golden tea house and then not necessarily going to the shows, but really digging and following the bands that have passed through.

The first show as Golden Tea House was Diarrhea Planet back in 2011 and they’ve had the likes of The Taxpayers, Screaming Females, Speedy Ortiz, The Menzingers, Potty Mouth, Spacin’ and so many others grace their kitchen. Three years is a solid run. Or, at least solid enough for people in Brooklyn to care.

Also, I can’t find it for the life of me, but I know there’s a music video out there of Candice Martello of Omar chugging a whole bottle of Jack Daniels in slow motion to a Slutever song, way before the kitchen got trashed and it was just someone’s off-campus housing.

PhilaMOCA – I’m going to say it’s the most unique venue in the city. Diplo owns the building. They debuted the Mad Decent block party (which we won’t blame them for. David Lynch endorses them. They have an Eraserhead mural on their building and another mural of their neighbor Sean’s face. They operate out of a gorgeous building originally purposed for making and selling tomb stones. And, they’ve been active since 2008. They also show independent films and host instillations and gallery shows. They’ve had the likes of No Age, Macaulay Culkin’s Pizza Underground, Lydia Lunch, Hunx and his Punx and many others. They also host crazy parties and all sorts of other events. Hop Along at PhilaMOCA in 2011 | Photo by John Vettese

FU Church – The basement of the First Unitarian church has been a safe haven for all walks of life being able to rock as hard or as gentle as they saw fit long before Sean Agnew and R5 started throwing shows. Part of the Unitarian’s philosophy is welcoming all people and offering refuge to all, including those who are not of the faith. Unitarian churches all over the world are hosts to many different types of events both secular and religious. A friend of mine recalls seeing the band Live Skull there back in the 80s or early 90s. And, apparently they’re also picking up some of the slack left behind by the Golden Tea House, which I think is great. Thanks, Church, you rock!

The Ox – “Don’t come here unless you despise all institutions and want to be depressed floating in ether.” Posted by Four Square User Barclay Shields, that may be my favorite comment on the internet about any DIY venue. This Kensington warehouse was started in 2009 by Greg Johnson and Brendan Mulvihill; bands like Dangerous Ponies, Slutever, Omar, Fight Amp, and Creepoid played here a bunch. A lot of other great shows happened here too: Beach Fossils, Ape School, The Jacuzzi Boys, Cloud Nothings. It ended with Two-Piece fest in 2011, as reported by The Deli.

Pi Lam – Still going strong. The first time I heard of this place I was skeptical; it was described to me as a frat house that threw shows. And that’s what it is. But, apparently not all frats are terrible voids of human pestilence. And then, I saw the first couple show flyers that led me there, which included Monotonix, The Notekillers, Awesome Color, Hot Guts and The Pains Of Being Pure At Heart. I took back all the bad things I said about them; they still throw shows and have also had a great list of incredible acts grace their generous walls. Highwire Gallery  – Perched in the “up-and-and coming-arts corridor” of Frankford Avenue, the only actual art gallery left a couple years ago was the Highwire Gallery. Some truly legendary people played some great music within those four walls. Donald Bikoff, Daniel Bachman, Jack Rose, Meg Baird, Little Howlin’ Wolf, Fursaxa, Marshall Allen and I could keep going, but that is less important than the fact that you should go to the website of the FIre Museum promoters, who booked at Highwire until it closed in 2013, and give them your support by going to one of their upcoming shows or making a tax deductible donation.

J.R.’s Bar – This wasn’t a house; it’s actually a bar where you can smoke indoors that put on shows until last summer. The first time I ever played there, everyone was locked out for an hour or so after the show was supposed to start because they were having a “meeting” which included a couple exotic dancers, who graciously stuck around for the weird show that followed. It was with The Love Club, we played with Lil’ Daggers and Brown Ghosts, and it was fun, mainly because it was really easy to feel like you had a good turn out there, given it’s tiny size.

Steve Firth, who started throwing the shows there, is a very nice guy. How and why it continued there for so long I’m not sure. My guess is because nothing terrible HAD happened YET (until this of course). And for a person just trying to throw a show, the easier it is, the better. I had some good shows there, and in fact that’s where I first met Eric Bresler who now runs PhilaMOCA. He was managing a band from Japan called The Heiz at the time. I don’t really miss this place. Like I said, I’m just sincerely impressed the assault didn’t happen sooner against someone like myself because I play some pretty wimpy music sometimes.

Little Berlin – Alive and well as this ever-evolving artists’ collective in SE Kensington- Fairgrounds area. The story comes from Marshall, or Ma Ja Ka the wanderer, one of it’s previous members (who has a book on Amazon BTW):

Two women Kristen Neville and Martha Savery started it in 2007 at Berk’s warehouse. They had studio space there and decided to start hosting gallery shows every now and then. It became a members collective in 2009 when they invited the first cast of members to join. Then it moved to it’s current location at Viking mills in 2011. The space was a black hole that was renovated by the members from scratch. Rock concerts were initially held outdoors in the courtyard with a firepit. I joined in 2012 (though I’d been going to concerts and art shows there since 2008) because the initial group of founding members had left from fatigue and their private lives getting too busy. Neighbors organized a meeting in 2013 asking us to not have shows outside anymore so I moved them inside. Firepit also had to be gotten rid of because concerns from the landlord and city after huge fires at warehouses right next door to us. 2014 we opened the annex performance space to be able to host shows and art openings simultaneously. Before that the music and art didn’t always work well together in the same room as far as safety for the art. Fairgrounds was started in 2011 and received a grant from the knights art foundation which helped fund farming supplies and commissions for sculptures. Zine library started in 2010 and now hosts over 5000 zines.

Viking mill was closed down at the end of 2013 (I think October) by L&I for a ton of code violations the landlord wasn’t taking care of. Little Berlin reopened within a month because of very few minor violations. The rest of the building didn’t open for several months until repairs were made. A lot had to do with zoning and spacing of walls from sprinklers. Eventually it was reopened and the landlord continues to make repairs based on plans made by L&I

More info is at littleberlin.org, including past members and past exhibitions.

What goes on in there? What you might find in a similar warehouse space in Berlin. Weird art, weird music, and weird (read: wonderful) people. I have nothing but respect and admiration for this collective, and the work that they do. Their block-parties are weird, but absolutely worth going to.