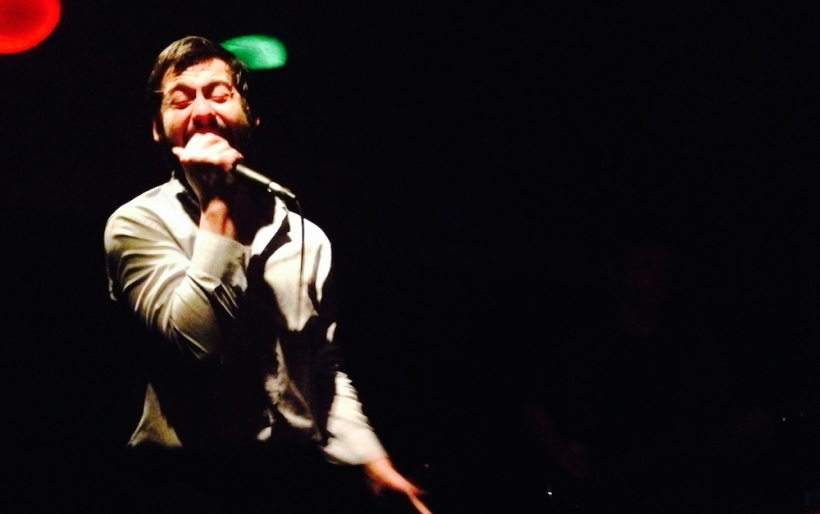 Even the newest music from Bryant Eugene Vazquez‘s sounds like it’s been around forever. The Philadelphia-based songwriter has explored a range of ideas and styles over the past several years, from folk to hard psychedelic rock in his Beverly Mud band, to garage pop. But kept in a blanket of vintage production tones, his music maintains a cohesive core and impeccably classic sensibilities.

“I guess, I never fancied myself a ‘pop’ songwriter,” Vazquez tells us. “But I grew up listening to The Four Tops a lot, I loved John Lennon before I even knew he was in The Beatles, CCR and other random good stuff: 60’s / 70’s and whatever ‘grunge’ was in the 90s.”

Vazquez grew up in Arizona, and moved to Philadelphia in 2013. He released the album Caliber on arrival, and it immediately impressed, documenting his cross-country move in spare, haunting acoustic compositions that wander nontraditional twists and turns in the vein of Austin cult fave Josh T. Pearson. He hit the ground running upon arrival in Philly, connecting with the Fergie’s open mic community and beginning what he describes as his “ADD writing” phase – sort or an explanation of the range of sounds he tacked in the various projects on his Bandcamp discography.

“ADD was a challenge to myself to try and write intentionally ‘poppy’ and condensed songs using the verse-chrous-verse formula, while maintaining a lot of what is essentially my filter or interpretation: still vocally gritty at times, subject matter kinda all over the place, personal and not,” Vazquez muses.

It all comes together in his new All Damn Day / The Greatest Hits. The album basically collects every sound he’s tackled under one umbrella. We hear expertly-crafted sunshine pop on the album standout “Daaang!!! (Cool Hand Sam)” and deep psychedelic soul on “Ain’t Nothing Wrong With Charlie.” The song “What’s Paisley? (City Blues)” is ramshackle acoustic rock with a slice-of-life music video (watch it here), while “The Barber’s Son” digs into bluesy folk.

In a way, he sees the frantic output as a lifesaver. His dive into the scene became so intense, he tells us, that “my drinking and mental / physical health collided and things became a bit unstable.” It was a difficult time.

“I almost gave up on the whole album,” Vazquez says. “And music. And art. Writing. Everything. Somewhere along those lines, I decided to take the meaning of the album to different light: All Damn Day – meaning this is all I ever do, all I fucking think about – music, writing, performing, you name it.”

He gave up drinking late last year, and he plans to release four more albums this year: tentative titles are Usedly New, Grey Expectations, Gone. Bad. Worse. Gone., and 1964 / Jump & Roar. In the meantime, he celebrates the release of All Damn Day / The Greatest Hits with a show at Kung Fu Necktie on May 30th (tickets and more information can be found at the XPN Concert Calendar). He also wants to self-release a book of poetry and exhibit his art in the not-too-distant future.

“Why? Because this is what I love,” Vazquez says. “Creating full albums. Stories. Fucking adventures. You name it. I don’t mind single, but fuck ‘singles.'”