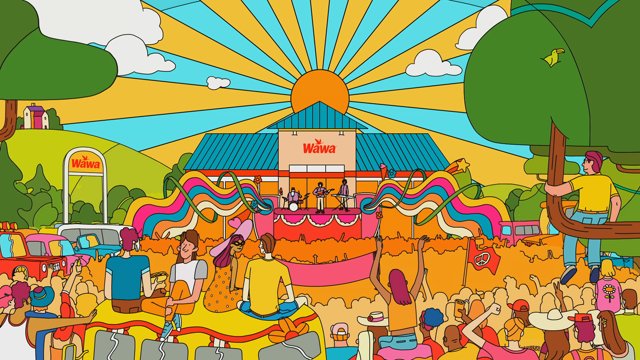 It’s something that most of us can relate to. We get hungry, or we need to hit the ATM. We need to fill our tank and get coffee. And, while waiting in line at our local Wawa, a song comes on the store radio that we start jamming out to. This is the concept behind @WawaBangers, a local Twitter celebrating its first birthday today.

When it first Tweeted on May 31st of last year, the idea was simply a straight log of music heard while shopping at Wawa. As it evolved over the ensuing months, the folks running the Twitter – who, while anonymous, are thoroughly dedicated – began retweeting any mentions it found of Wawa, particularly ones that involved music.

As a small following amassed, the experience became more interactive – which is where we’re at today. You Tweet what you’re listening to at your local Wawa, tag @WawaBangers and they retweet you, sometimes chiming in with their own commentary. The collection of songs has run the gamut from Stevie Nicks and Madonna to Gotye and Taylor Swift. Last night, on my midnight journey home from the Roots Picnic, I got a near-immediate retweet when I tweeted about hearing Prince’s “Kiss” at the Chinatown Wawa.

Post-#RootsPicnic hoagie run at 11th and Arch and they’re jammin to “Kiss” by Prince. @WawaBangerspic.twitter.com/rMCcUoCUta

In short: tremendously fun idea, and something that Southeastern Pennsylvanians at large should know about and interact with. So as we tip our hat and send Happy Birthday wishes to the folks at @WawaBangers, we’ve collected some of our favorite Wawa Bangers from the past year below. (If only the amazing “No Wawa In The Hood” would find its way into rotation. Then again, if only the message behind “No Wawa In The Hood” would be heard, but that’s another post entirely.)

What are your favorite Wawa Bangers? Let us know in the comments. And let @WawaBangers know on Twitter.