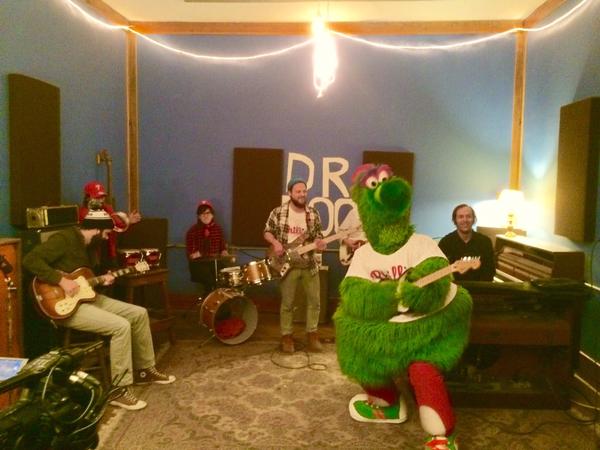 Premiere: Dr. Dog have written a song about the Phillie Phanatic and it’s awesome

The most beloved sports mascot in the world, the Phillie Phanatic, was a guest on the radio with WXPN’s Dan Reed during Dan’s Top 5 at 5 feature. Actually, it was Tom Burgoyne, the “Phanatic’s best friend,” who sat in with Reed to play songs by Jimmy Buffett (“Fins”), Little Feat (“Feats Don’t Fail Me Now”), “Glory Days” by Bruce Springsteen, and “The Late Show,” by Jackson Browne. The fifth song that Bergoyne played was a new song by the Phanatic’s good friends, Dr. Dog.

Last November, we wrote about the Phanatic visiting Dr. Dog in their studio to film a promotional video for for the Phanatic’s charity, Phanatic About Reading, a program that encourages students in grades K-12 to read for a minimum of 15 minutes a day to improve their literacy skills. Now the word is out: the Phanatic filmed a video for a song that Dr. Dog wrote, “The Phanatic Song,” that will appear on a DVD called The Phillie Phanatic’s One-Man Band, that will be given out for free to kids 14 and under on September 13th at Citizens Bank Park when the Phils play the Chicago Cubs. During Bergoyne’s interview with Reed, Bergoyne talked about the DVD, based on the his book The Phillie Phanatic’s One-Man Band Book.

Without any further ado, we present to you “The Phanatic Song” by Dr. Dog, a fun, good time, totally catchy Philly-soul earworm that will be on the DVD and (hopefully) soon to be heard often at Citizens Bank Park. Seriously, this might be even better than The Action News theme.