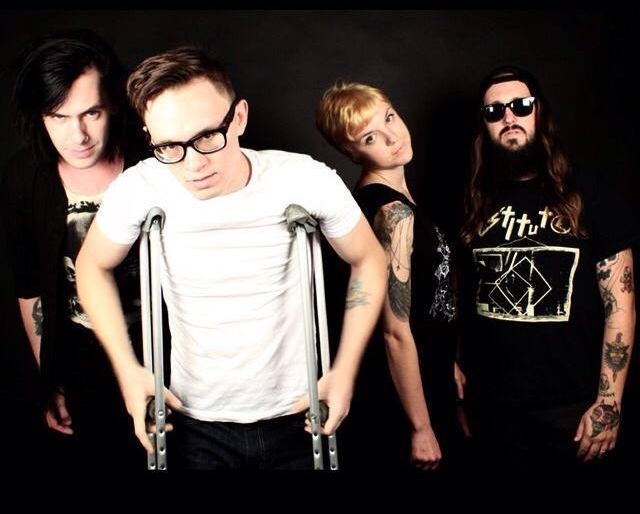 Creepoid | Photo by Noel Conrad | courtesy of the artist

Imagine walking into some downtown dive bar late at night, and recording what you see when you first step through the door. Hazy swirls of cigarette smoke coat the place in a fog. Over at the bar, the ancient TV is playing an episode of Mystery Science Theater 3000, and the only three patrons are all slumped against the counter. In a booth, a couple is halfheartedly kissing, trying to escape the burdens of life and temporarily replace them with love. Philly noise-punks Creepoid would probably be a fitting soundtrack to this dreary scene.

Here’s the difference, though: Creepoid frontman Sean Miller doesn’t sing about depressing bars, but he can make you think of everything else that’s dreary – and make it sound absolutely beautiful. Behind his fed-up, rebellious drawl, his bandmates craft vast, dramatic surges of distortion and feedback. It’s mean, it’s heartbreaking, it’s grunge, it’s shoegaze, it all spirals into blinding noise we listen to for pleasure. And never has pain tasted so sweet.

Creepoid crawled out from the depths of the Philly punk scene in 2010. And while their music may seem like they have the viscosity of glue, just barely holding two and two together, Creepoid really know what they’re doing. They’ve already released two acclaimed albums, their 2014 self-titled and 2011’s Horse Heaven. The band sounded incredibly confident on these efforts, basking in their gloominess.

But real seriousness came when the band decided to make their act a full-time job. Drummer Patrick Troxell likens it to “jumping off a cliff together” – the band put all their things in storage and geared up to face life on the road.

This courage, appetite for riskiness, and new-found maturity is reflected on their newest album, Cemetery Highrise Slum. Troxell said of the album’s title:

Right off the bat, Creepoid expects you to pull yourself down into their hazy, downer la-la land on “American Smile”. In his best Billy Corgan snarl, Miller throws a punch at urban life in the USA: “The city sucked up your light/You’re growing your American smile/You’re searching for your voice/But you barely make a sound.” The driving, fuzzed-out chords and steady hits of the ride cymbal make you feel like you’re looking out at that highrise slum.

On “Fingernails”, bassist Anna Troxell’s voice is highlighted. She’ll hold a note in harmony with Miller, and then it winds down like an anchor hitting the ocean floor. Clean guitar fills most of the song. with bends dripping down like a nighttime downpour. The thunder comes at the end in the form of numbing distortion and feedback.

“Seams” finds the band doing its best psychedelic impression at first, with the opening riff nearly spinning a spiderweb in your ears. But by the end, the song is drenched in more feedback, and the tune becomes akin to a failing space transmission. You might as well be piloting your damaged spacecraft through a black hole to this one. A soundtrack idea for Interstellar 2, maybe?

Miller’s voice comes closest to sounding like Cobain on “Dried Out”, one of the standout tracks on the album. “Show me the real you!” he growls over the warm, My Bloody Valentine throb of his fellow bandmates, which appropriately leads into the album’s centerpiece, “Shaking”.

This song finds Creepoid at possibly their most vulnerable to date. Weeping guitar surrounds Miller as he spills his guts in a low croon. Think about those high school dances where the DJ threw on a slow song and told people to find their partners. And there you were, in the corner without a lover, watching everyone make googly eyes at each other.

“Oh, you’re shaking my heart!” Miller cries, and guess what? If you’ve been sleeping through this album so far, the raw emotion of this song will definitely shake something deep down within you.

“Shaking” and the following track, “Calamine”, are reminiscent of Built to Spill, but with a little more bite. “Tell the Man” finds the Pumpkins influence returning, and Miller is at his meanest, spitting venom into the mic and demanding “Tell the man I’m here, tell him my name.”

“Eating Dirt”, with its riff that combines the best of Nirvana’s “Breed” with the Purple album by Stone Temple Pilots, is a wind-up punk jam. Might want to tell Creepoid to wind it back up after about the one minute mark, but the way it breaks down into sonic chaos is a signature Creepoid moment you won’t want to miss.

Closer “Here” is a sprawling, ambient piece that mashes those bending guitars together. Miller’s voice takes an interesting turn here, as it sounds like Leighton Antelman on early Lydia material. It’s an intriguing final statement, and it sums up the album pretty well. It’s like you’re taking a final walk through Creepoid’s slummy world, trying to avoid the creepy crawlies and climb your way back out to some sort of happiness.

This is Creepoid’s most fascinating, self-aware album to date. Miller’s voice has multiple personalities, able to switch from the angry and grungy to soft and bittersweet. His bandmates build up a wall of sound around him that can be infinitely dissected in more detail with each listen. And even though the band never rises above mid-tempo, they urge us to slow down and take a cold hard look at the world around us. Creepoid is here to remind us that even when we feel happy, there’s always a slight undertone of melancholy lying underneath.

Cemetery Highrise Slum is out June 23 on Collect Records, but you can stream it in full over at SPIN. Creepoid is also hosting their record release show at Johnny Brenda’s on Friday, June 26. Get tickets here.