Spraynard's Mable may sound more mature, but it's still a whole lot of fun - WXPN 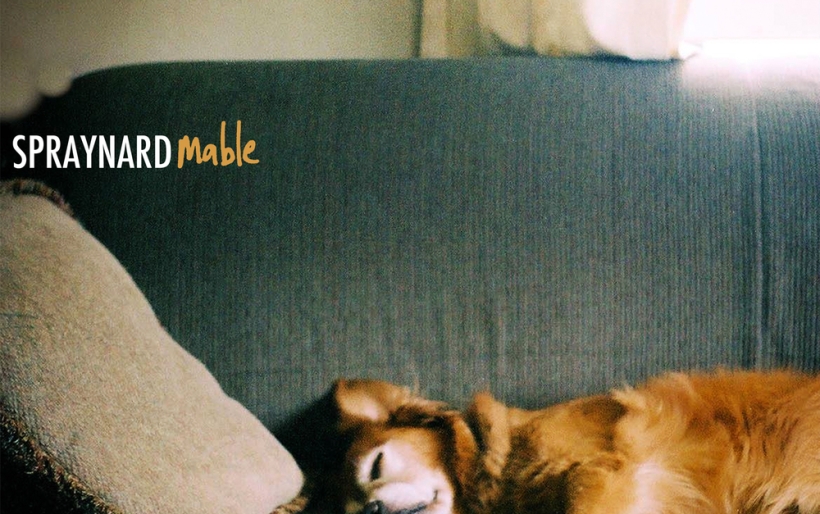 Do you remember where you were when Spraynard hung their hats in 2012? That was a sad day in the PA music scene. The trio was known for its unique brand of pop-punk that praised the quirks of suburban living rather than the “I-hate-this-town” bashing that other bands sung about. They took their bland surroundings of their home in West Chester and built something amazing.

Luckily, the breakup didn’t last long – Spraynard sold out reunion shows at Grand Slam USA in Malevern the First Unitarian Church, and the members decided they wanted to commit to the band again full-time.

Now, a few years later, Spraynard is on fire once again, and they’re releasing their third album Mable this Friday, July 10th via Jade Tree Records.

The record’s name and album cover are a tribute to a golden retriever owned by Runner Up Records’ Sean Morris. According to lead vocalist/guitarist Patrick Graham, the 13-year-old dog’s image represents the changes the band has gone through since their formation:

Mable represents the transformation of our friendship…when Mable died, Sean moved to the city and we stopped booking shows in West Chester, it was the end of something major in our lives.

Much of Mable is the Spraynard we know and love. One thing that’s sorely missed here, however, is the dual vocal duties rounded out by Mark Dickinson on Funtitled and Cut and Paste (he decided to continue his teaching career). In his absence, Graham helms most of Mable vocally, but does so with finesse.

And to be honest, the band sounds solid on these 10 new tracks. This album is a gamechanger for both Spraynard and the scene that surrounds them. But enough hype – let’s get to the songs.

If you’re not familiar with Spraynard’s knack for humor, let opener “Applebee’s Bar” properly introduce you, as Pat Graham yells: “I am every person that you’ve ever ignored; I’m the flaming bag of dog shit on your porch.” But just as you’re ready to settle into another fun-filled Spraynard album, Graham opens up the window, widening the scope of his reach, finding himself in all of the people screaming his words right back at him.

“You’ll always be haunted, I will keep you fighting,” Graham continues. While this may sound like  someone who’s a relentless stalker, when put in a slightly better context, Graham has embodied someone who’s dedicated to keeping you on your feet. It doesn’t matter if he used to “think he was a savior, a part of a cause” if the people he cares about are down for the count.

Yes, this album isn’t necessarily another one of those “Woe is me” compilations that overpopulate the pop-punk and emo universe these days – it’s more of an outside-looking-in situation. The guys in Spraynard have seen some shit, and they’re curious to know how other people live – whether they’re content, struggling to get by, heartbroken, or whatever else that can be observed. Yes, it’s possible for punks to care about people other than themselves!

This feeling is exemplified in track two, “Buried”, appropriately named for the way it buries you in a wall-of-sound barrage. In the final seconds, amidst blazing guitar and crushing drums, Graham lets out his best Offspring wail: “I just wanna know what it feels like to be alright!”

The momentum of that track, as well as that last line, carry right over to “Medicine”, where Graham realizes he has to let go of the “me” and focus his efforts on “us”, whoever or whatever that may be. It’s actually a touching, uplifting song, an anthem for that moment you realize you truly can’t live without someone. Like the unbreakable friendship that has surrounded Spraynard, we all need someone to be our medicine so we can be alright for a while. Let this song be a sweet reminder.

But don’t bask in that happiness too long, because Spraynard will drag you back down to self-loathing with “Pond”. As the opening chords thwack away, Graham sings of drowning in a pond while no one cares, hating his body and laziness, and not doing a single thing about it. What happened to all that positive stuff? Well, according to Graham, sadness isn’t so bad. “The point is that the world is sad, so you don’t need the reassuring thing. You just need to revel in it,” he recently told NOISEY. Tired of hearing Graham’s sob stories? Go to the next song, “Everywhere”, a scorching punk track that may or may not be about aliens.

One thing that Spraynard have mastered on Mable is the careful task of moving while being moved; taking their words and instrumentation and dropping them on their fans like lead weight wake-up calls. This is the kind of album that hits you directly – the kind that makes your eyes widen, saying “I want to start a band”.

Perhaps the most moving track on the record is “Bench”, which starts as a solitary bass riff that chugs along to Ware’s calculated drumming. Effortlessly, the song becomes a heartstring-tugging sludge, a bittersweet crawl, illustrating post-breakup feelings of sitting on a park bench without a loved one. It features one of the album’s tastiest instrumental moments, with Graham’s mucky distortion wading through crashing cymbals.

Replacement bassist Jake Guralnik’s playing trailblazes the cruising track “Listen to Me”, a real standout. This is one of those songs that feels like it belongs in the gold frame of late 90s/early 00s pop punk – an anthem dedicated to speaking out when things just don’t seem right. Just try not to shout that irresistable two-word chorus hook at the top of your lungs (YOU SAIIIIDDDD!). Just try.

What often happens with standout tracks is the song after them just doesn’t hit as hard. That’s the case with “Lost Boys,” which truthfully does seem a little lost. If it were placed earlier in the album, it may have fared better, but here, it falls slightly short of the mark. A minimalistic arrangement, Guralnik once again carries the song, but it’s easily forgettable once screeching guitar comes in at the end. But Spraynard won’t care what I have to say here – after all, this track has the line “Let’s fuck up just for the hell of it”.

Things get back on track with “Out of Body”, an almost shoegazy number dedicated to one of Mable‘s central themes: hating your life. It still flows pleasantly, as Graham delivers one of his strongest vocal performances – even as he jumps back into that pond (“Hold me under until I’m about a minute from death”). These sad songs are great, but for fans of the old Spraynard, they know that the band has a history of fighting depression with positivity.

Don’t worry – closer “Home” will make you glad you stuck around. It raises a toast to people who have found comfort in being by themselves. “You learn who you are, and that’s enough to get you home”, the band conveys through upbeat group chants.

Mable is a distinct turning point for Spraynard: Whereas their previous albumswere concerned with packing as much crude humor, inside jokes, and one-minute songs into an album, Mable feels more tangible, more personal than ever before. It’s mature, cohesive, and confident – even if it’s confidence in being doubtful.