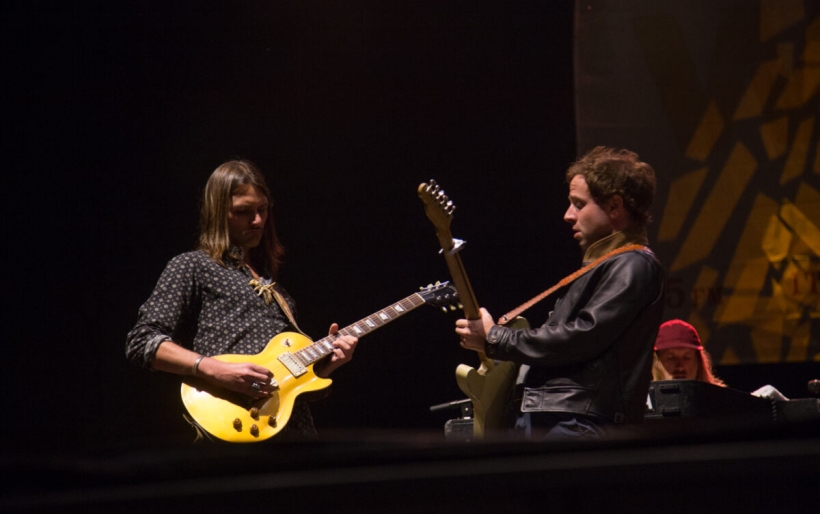 If you’re an #XPNFest regular, I probably don’t even have to tell you the story. Los Angeles rock and roll four-piece Dawes played in 2012, and it rained during their set; they returned in 2013, and it rained even harder, so much so that their set had to be called off. In 2014 they were back, this time on the Susquehanna Bank Center stage opening the night for Jenny Lewis and Ryan Adams…but fans were crushed that they only got to play a five-song / 25 minute set. Which brings us to tonight, with Dawes headlining the first night of XPNFest 2015 and nary a cloud in the sky.

Kicking the set off with the rollicking “Things Happen” from the band’s fourth LP All Your Favorite Bands, the guys mixed up old favorites like the jangling pop of “Time Spent In Los Angeles” with new cuts like “Somewhere Along The Way,” which featured a smoldering guitar solo. Speaking of guitar, the festival was the Philly-area debut of Dawes’ expanded lineup featuring guitarist Duane Betts, son of Dicky Betts of The Allman Brothers Band. His playing added an expansive layer onto an already-tight group of players, and during an epic cover of “Fisherman’s Blues” by The Waterboys – punctuated by a hypnotic rhythm care of drummer Griffin Goldsmith – it truly shone.

Other moments were expected, but no less powerful – the tearjerking “Little Bit Of Everything,” the righteous singalong to “When My Time Comes.” For an encore surprise, Griffin took lead vocals in a spot-on cover of “Big Shot” by Billy Joel, and the night drew to a close after 90 minutes with the road trip jangle of “From A Window Seat.” Check out photos and the setlist below, as well as an Instagram video, and check back all weekend for continued XPNFest coverage.