XPNFest Recap: Guitar jams and artistry from St. Vincent and My Morning Jacket at SBC - WXPN 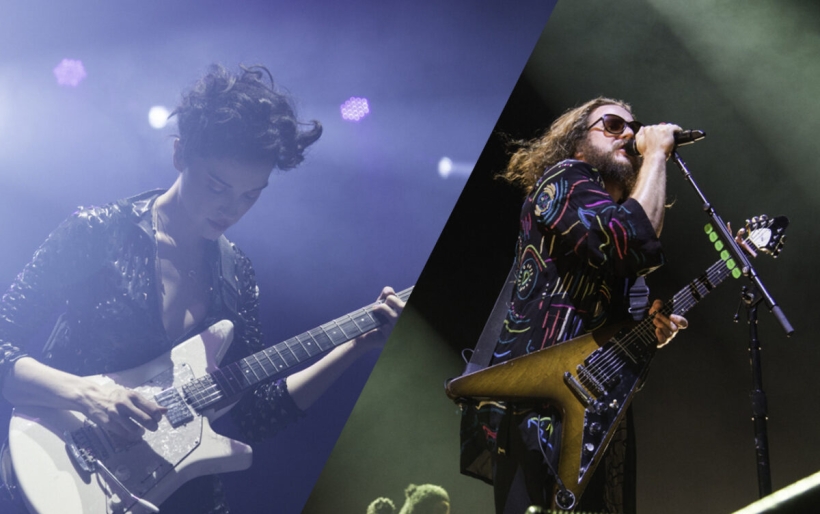 XPNFest Recap: Guitar jams and artistry from St. Vincent and My Morning Jacket at SBC

At first glance, last night’s headlining XPNFest pairing was an unusual one. Theatrical, otherworldly indie rock diety St. Vincent played first, followed by a set from jam-intensive roots / Americana faves My Morning Jacket – how was this going to work?

As it turned out, it worked out phenomenally, and the artists has more in common than meets the eye. Both boast some of the best living guitarists in rock – Annie Clark, the woman behind St. Vincent, as well as Jim James and Carl Broemel, the dueling duo at the front of MMJ. Both have a strong artistic sensibility to what they do – St. Vincent’s cerebral pop songs and clever choreography, MMJ’s expressive and expansive jams. And both have songs that totally slay in concert – St. Vincent’s “Actor Out of Work” and “Digital Witness,” MMJ’s “Lay Low” and “One Big Holiday,” just to name a handful.

St. Vincent hit the SBC stage at 8 sharp, and wasted no time energizing the crowd with “Birth In Reverse” – which featured an intricate, ballet-step back-and-forth with guitarist Toko Yasuda. Clark is a charismatic performer and knows how to connect with the crowd – saying hello to “Camden, New Jersey slash Philly” during “Rattlesnake” and referencing regional luminaries Questlove, Jill Scott and Ben Franklin on her lead-in to “Marrow.”

“Your favorite Hall and Oates quote goes like this,” she said. “‘Now there’s no use you resisting / This is the Cradle Thief insisting / I think you better let me have it my way / Fool around with me, come on mess around with me.'”

When she wasn’t doing a dramatic reading of “I’m Just A Kid (Don’t Make Me Feel Like A Man)” or dancing in the light show – the spots during “Cheerleader” bounced off her face and guitar, creating an alluring glow – she was shredding. The solo in “Prince Johnny” was sick, albeit more traditional rock and roll style; the guitar outro to “Surgeon” was avant-garde and dissonent. Either way had her devotees shrieking with joy, as well as the MMJ bro crowd who had no idea what to expect whispering amongst themselves how surprised they were. As for MMJ – they did what they do best: rocked, and rocked, and rocked some more. Their set opened with a steller take on “Off the Record” from 2005’s Z, plowing directly into the new “Compound Fracture” and “First Light” from Circuital, which featured Broemel taking a crazy saxophone solo.

The band definitely favored the less-talk-more-rock approach, moving from song to song with the quickness. It wasn’t until after a hammering take on “Lay Low” that the band paused and James talked about how thrilled he was to share the stage with St. Vincent, “one of the best guitar players…ever. Unbelievable.”

Before coming over to SBC, the band apparently spent some time over at Camden’s Adventure Aquarium, and James shared a story about his encounter with a hippo: “I stood face to face with it and looked death in the eye,” he said with a touch of faux-dramtics. “I stood face to face as it opened its mouth. It was like staring into the eyes of all life.”

This ushered on Waterfall‘s “Spring (Among the Living),” at which point their set took its own side-trip into the exploratory and surreal. “Dondante” was jammed out for 15 minutes of very subtle playing and gradual buildups – it seemed like it had been going on for a while aready, and then Broemel grabbed his sax again to space it out a bit more. The set stayed into this darker, brooding corner for about a half hour before being rescued by the celebratory “Circuital” and closing in a big way with the live staple “Mahgeetah.”

For an encore, the band played Waterfall standout “Believe” as well as an explosive disco-fied rendition of “Touch Me I’m Going To Scream Pt. 2” and wrapping on the classic “One Big Holiday.” All told it was two hours and 15 of MMJ and close to four hours of musical magic overall. Check out photos and setlist from the show below.