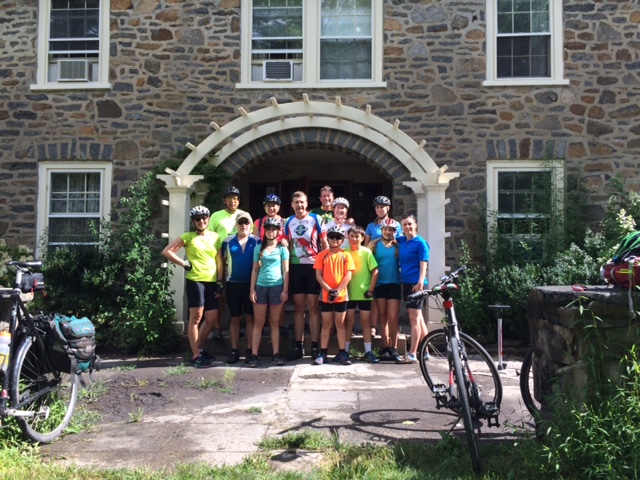 Talk about dedication. Today we got an email here at the station from Janice Hayes-Cha, a painter and XPN fan who moved with her family from Philly to Boston earlier this year. But, as she tells us, they grew to miss Free at Noon every Friday, and managed to talk a group of friends and their respective families into a bike ride to see one. A really, really long bike ride.

The group is closing out summer of 2015 by traveling 10 days and 521 miles by bicycle from Boston through Rhode Island, Connecticut, upstate New York as well as NYC, and New Jersey. As of this morning, the F@N Caravan – which ranges in age from 11 years old to 54 and consists of six kids and eight adults – crossed the border into Pennsylvania and are resting up in Valley Forge. Tomorrow, they’ll leave bright and early to take the Schuylkill River Trail into the city, triumphantly arriving at World Cafe Live in time for Cheerleader to take the stage.

Janice tells us that she and her husband Jang-Ho have been going on summer bike roadtrips with three other couples for the past several years; they’ve done Quebec to Bar Harbor, Maine; they’ve ridden from Pittsburgh to Washington, D.C. This April, when a new job led the Cha family back to their native Boston, the summer bike trip was planned to show off their adopted home to their old friends.

“We absolutely love [Philly],” Janice says. “And XPN has been such a big part of that, we’ve been to so many Free at Noons. We’re so happy and proud to show our friends Philly and XPN.”

The F@N Caravan has mostly followed various Rail-To-Trail paths along the northeast. But its route has also gone along bridle paths, country roads shared with cars, and even taken them from the Hudson RIver Greenway to Battery Park in New York.

“The secret to our trip is we have one adult driving a mini-van at all times, and we split up driving,” she says. “That way we can each get some rest. We decide on a meeting place in the morning and the van will show up there with lunch in a few hours.” The van is also there in case of emergencies, but thankfully this trip hasn’t had any major ones.

Janice says the biggest challenge was the path through Connecticut, which was extremely hilly. “We had some really super hard days,” she says. “I mean 60 miles a day going up and down these huge hills. We had eight flat tires.”

But the group packs a lot of energy – particularly the kids. “They’re super troopers, they easily do all the milage, even the days when we do 50 or 75 miles a day.”

When the trip started ten days ago, Janice says they had no idea who the artist at the end was going to be – it wasn’t announced that Cheerleader was playing the show until last Friday. It was a bit of a gamble, but she says the group is collectively psyched that such a fun and energetic band is waiting for them at the finish line. So if you see people show up at Free at Noon tomorrow in spandex and helmets, please give them high-fives and congratulate them on their journey. Biking in the Connecticut woods | Photo courtesy of Janice Hayes-Cha Triumphal arrival in The Bronx | Photo courtesy of Janice Hayes-Cha