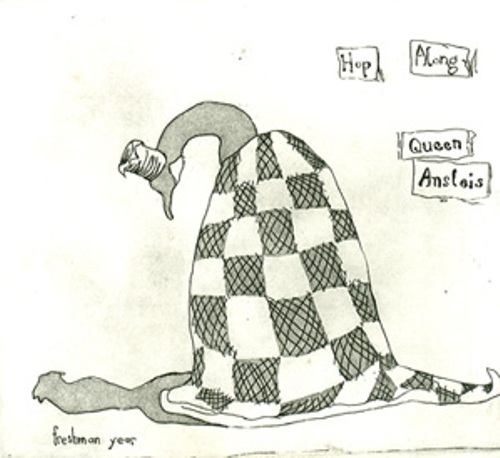 Ten years ago, Frances Quinlan of Hop Along was getting ready to head back for her second year at Maryland Institute College of Art and scrambling to finish her summer recording project: Freshman Year, the first release by her band Hop Along (then called Hop Along Queen Ansleis).

Twelve hours ago, Hop Along posted a video on their Instagram: a vinyl record spinning with the sound of “Sirens” – the opening song on the album – piping through speakers. An acoustic guitar strums, a xylophone chimes and the caption reads “Coming soon……….”

Assuming this means what it looks like it means – that Freshman Year is getting a vinyl edition – this is kind of a big deal. The album never got a proper release back in the day, short of the CDs that Quinlan burned to hand out to friends before leaving for school…followed by a couple subsequent CD batches that were sold at shows until she ran out in 2008 or 2009.

True, Freshman Year can be heard in its entirety on YouTube – and the various Internet proliferations of it are a big part of what drove Hop Along’s fan base today. The number of webcam covers of songs from Freshman Year is pretty staggering, and Waxahatchee’s Katie Crutchfield semi-notably has a tattoo of the album cover on her left arm.

But listening to spotty rips of an album on YouTube is not the same as listening to a properly-released version, and we’re particularly excited to drop the needle on this one, whenever or wherever or however it comes out. We’ll have more news and details as they develop. Hop Along plays the Made In America Festival on labor day weekend; more information can be found at the XPN Concert Calendar.