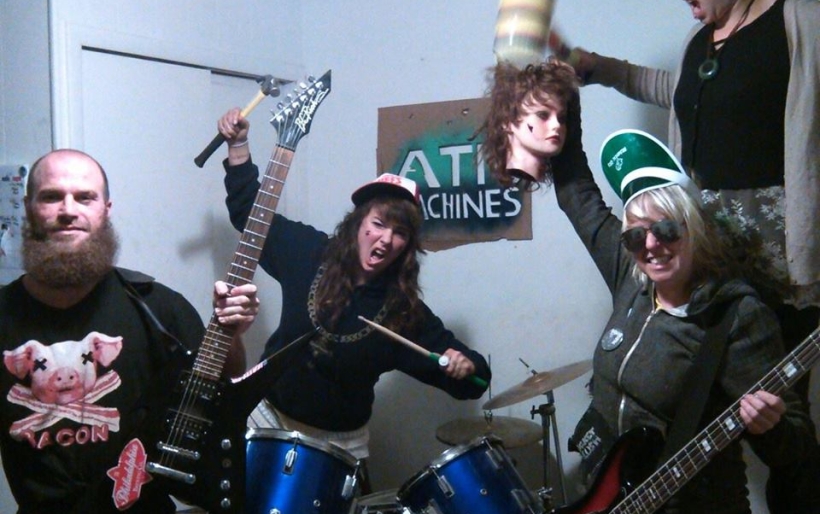 Okay, so you’ll have to bear with us. It’s a Monday. It’s late August. And while we normally wouldn’t concert pick a show when there’s no music online that we can share with you, like as if to say “Here, listen, this is pretty cool,” truth be told there’s not a lot going on tonight. And truth be told-er, we’re pretty damn curious about The ATM Machines‘ gig at Kung FU Necktie, even though they have zero presence on Bandcamp, Soundcloud, YouTube…not even the dreaded ReverbNation.

The little we can ascertain: KFN’s website describes them as a “rock / metal band outta south Philly” and they’ve been around for about a year. Per their band photo (above), they enjoy Philadelphia Brewing Company beer – which I wholeheartedly approve of – and they seem like people who would throw pretty kickass parties. I’m imagining Motörhead-channeling Philly bands like Beretta 76 and Betty Iron Thumbs. Dudes / dudettes, please get your tunes online! And for folks who are into the idea of taking a chance on something potentially badass, make your way to Kung Fu Necktie tonight. More information can be found on the XPN Concert Calendar.

They’re playing with two touring bands from North Carolina, as well as Philly’s Menace to Sobriety, which channels Black Flag and political punk rock of the early 80s. Check out one of their jams below.