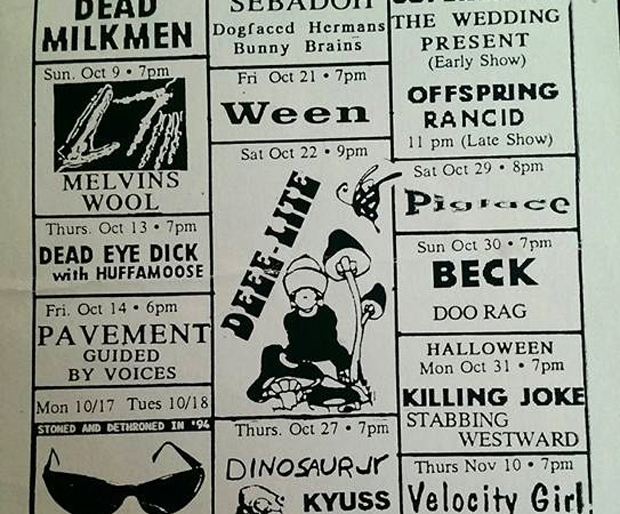 The Troc Calendar from October 1994

The Trocadero calendar from fall 1994 was ridiculously awesome

We’re approaching that time of year when the Philadelphia concert calendar begins to seriously heat up. That point after the August lull when cooler temperatures, a spate of new releases, and a casting off of summer boredom fills various venues around the city with a sick roster of shows and eager crowds of show-goers. Call it “Rocktober.” Call it “the fall touring cycle.” Whatever it is, it’s always been generous to the city of Philadelphia, as this 21-year-old calendar from The Trocadero proves.

The above picture came across my Facebook feed yesterday care of my friend Jesse, and it immediately dropped my jaw to the ground. Chinatown venue The Trocadero used to send these postcard-size concert calendars out to their mailing list, leave stacks of them in record stores, and Troc regulars used to collect them. (Not unlike the way R5 Productions used to hand out leaflets after shows with their concert calendar in their early days.)

This one dates back to 1994, and woah. Jesus and Mary Chain with Mazzy Star opening? Pavement and GBV on the same bill? (Bet every indie rock dude in the city was at that show.) Beck‘s first Philly show, Dead Milkmen‘s final pre-reunion show, freaking Deee-Lite. New Hope oddballs Ween on the Chocolate and Cheese tour, perennial industrial faves Pigface, freaking Velocity Girl. This is the very definition of a stacked concert calendar.

This of course pre-dates my own concert-going, so I have to live vicariously. Did you go to any of these concerts? How the heck were they? Tell us about them, let us know if you too have saved any particularly crazy concert flyers from days gone by, and get stoked for another fall of awesome shows in Philly.