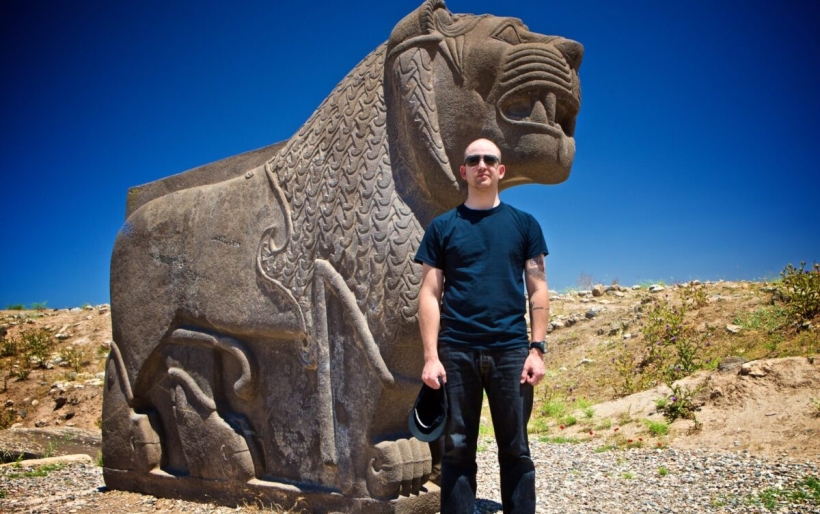 By Jonathan Pfeffer
September 19, 2015
11:09 AM
Share
Jason Hamacher at the ruins of Ain Dara | Photo courtesy of the artist / Lost Origin Productions

Whether documentarian/drummer/massage therapist Jason Hamacher is rhapsodizing about Minor Threat and the Teen Idles or kicking some deep knowledge about the Gnostic origins of ancient Syriac chants, he does so with the same mix of startling scholarship and infectious exuberance.

Hamacher grew up the Headbanger’s Ball-watching middle son of a Southern Baptist minister in Satellite Beach, Florida before moving to the D.C. area in 1992. He cut his milk teeth in knotty 90s post-hardcore trio Frodus—touring with a pre-Shellback Refused in ’98—before going on to play in Decahedron with Fugazi bassist Joe Lally, and Tampa grind militia Combatwoundedveteran.

Hamacher’s decade-long Sacred Voices of Syria project began when he discovered that the world’s oldest Christian music had gone undocumented. In 2005, the Syrian Orthodox Church, one of the earliest Christian communities, granted Hamacher permission to record their oldest chant traditions. Over six years and several trips, he documented the ancient prayers, hallowed rituals, and sacred spaces of Syria.

Hamacher is bringing a showcase of his project to The Rotunda on Monday, and I spoke to him about the roots of community expression, guerilla-style ethnomusicology, and the lasting cultural impact of his endeavors.

The Key: Do you see any connections between the social rituals and ideologies associated with ancient Syrian music and the ones you engaged in as part of the DC punk community?

Jason Hamacher: With both practices, it wasn’t a matter of “this is what I like to do,” but “this is what I do.” That’s the similarity I discovered between the practice of these ancient traditions and my own musical trajectory.

Not everyone identifies with all the time, effort, and hard work it takes to master these ancient chants; it’s a lifetime of dedication. I think the passion and dedication of learning to do something just becomes part of the fabric of who you are during that process. It’s the same thing as playing in a punk band.

TK: Punk was revolutionary in that it removed the barrier to entry—anyone could almost immediately pick up an instrument and participate—but the fact that so few people are master musicians in the Syrian Orthodox Church makes it seem quite daunting and inaccessible.

JH: It’s actually the same entry point. You’ve got the community that does it but then there are the masters who take it that extra mile and decide to learn the entire catalog.

Perfect example: the Syriac chant that’s coming out on Smithsonian Folkways. You’ve got these four guys who are masters, but then all the deacons and laypeople that show up every day and try to take cues off of the masters. A lot of church members don’t even know what they’re saying in Syriac.

TK: I’m really fascinated by the musical range that can evolve from the experiences of specific communities.

JH: It’s not only about the music’s roots in a community but it’s about how that community expresses itself. That’s what I’ve always found interesting about the ancient practices: this was the way that they decided to communicate theology. All these melodies were created to spread ideas, just like punk.

I’m trying to contextualize how these recordings sit in a greater body of the history of the region. Ultimately, I wanted to build a bridge between people who didn’t know much about Syria and Syrian people, who I felt were being misrepresented by the American media.

TK: How did your experiences in punk prepare you for your first few excursions to Syria?

JH: All my Syrian-related activities started because I wanted to hear this music but no one had it. I never intended on doing any of this. I just thought it was so ludicrous that the world’s most ancient Christian practice can’t be heard. It just doesn’t make any sense! [laughs]

I’m a huge people person. I find the process of applying my interest in people to an ancient community, as well as a modern community inside of that ancient community, really interesting. All of that stems from feeling like I could connect and access the hardcore community.

The initial yearning to learn how to book tours, put out records, and not expecting it to be done for me, is what crafted my attitude on how to execute everything I ever did in Syria. Being in a band in the mid-90s—pre-Internet and pre-cellphone—helped me develop the personal skills to know how to call up the Syrian embassy and speak well enough to actually get a meeting with the ambassador.

TK: In light of the refugee crisis and ISIL’s continued destruction of Syrian antiquities, what role do you hope the Sacred Voices of Syria project might serve for the growing Syrian diaspora?

JH: Last night at my event in DC, there was a deacon from our local Syrian Orthodox Church who said that my efforts over the last decade have already saved portions of their culture that no one else knows how to do.

When the war started, I actually stopped working on everything. I did not want to feel like I was taking advantage of the struggle in any way, shape, or form. I remember the news showing the city of Aleppo as a bunch of rubble and dust. People still ask me all the time, “You’ve been to Aleppo. Does it really look like that?”

I understand that Syrian immigrants and refugees the world over will potentially use what I have as teaching tools for what their culture used to be, what their cities used to look like, and what their songs and language used to sound like. I’m trying to provide an access point for these cultures that people—myself included—rarely have a way to interact with.

Hamacher will appear at The Rotunda on Monday, September 21st to share personal experiences of the people, places, and events he encountered in Syria before the eruption of war. More information on the event can be found here.