Superlith is the cyberpunk improv duo of trombonist Dan Blacksberg and circuit bender Julius Masri, two multifaceted sonic reducers with deep Philly roots. Blacksberg is regarded for incorporating music of the Hasidim into avant-metal and free jazz, having collaborated with Liturgy and Anthony Braxton. Masri switch-hits as a synthy noisenik with the likes of Joo Won Park and Charles Cohen, and as a versatile free drummer, often accompanying dance. 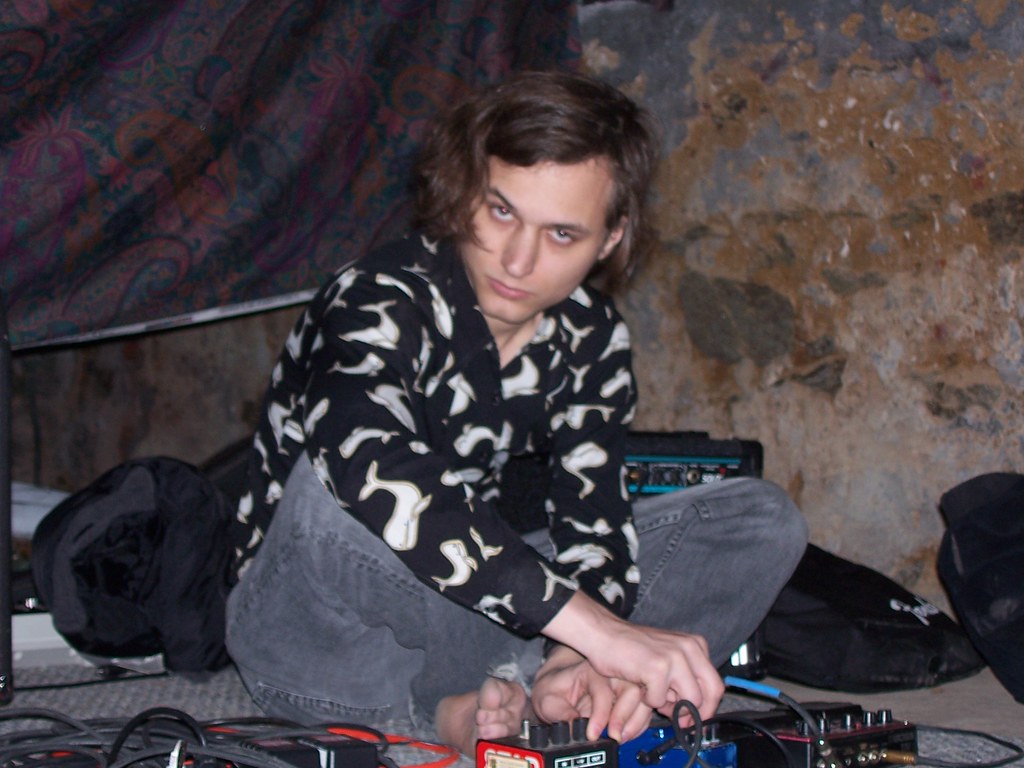 If Superlith is the half-conscious, electroshocked Computer Father languishing at the bottom of the sea, George Korein is the Omega figure, a scavenger with webbed feet and gills sailing the world in a homemade Trimaran in search of “Dryland.” Korein is a curious and highly elusive local figure whose body of work spans Ween-esque pop, corrosive noise, and metal of the shred persuasion.

Even though Korein regularly collaborates with Colin Marston (Krallice, Gorguts), Helena Espvall (Espers), and Jesse Krakow (Shudder to Think, Time of Orchids), the universe he cultivates with The Spleen is often a solitary one. On “Hazards,” a macabre ditty built on a gothy disco shuffle and Roddy Bottum piano, Korein intones about being burned alive by freshly dried clothes in a sardonic Sprechstimme akin to Joe Jack Talcum singing Mark of the Mole-era Residents. If Korein wrote standards, the charts might look like the Codex Seraphinianus.

In advance of Superlith and George Korein’s September 24th show at AUX, I spoke with Korein via e-mail about socially unacceptable expression, the chops of “no chops,” the double-edged sword of using humor in music, and leaving the business of rabble-rousing.

The Key: The sound world you inhabit is often macabre but your style of singing suggests a certain self-awareness—perhaps even sarcasm—about the pitfalls of unrelenting bleakness.

George Korien: I think negative lyrics are really common— some really vanilla music has gloomy lyrics and no one bats an eye. I think my delivery is just a little too direct for people to comfortably accept. It’s kind of absurd when you consider how dark and violent mainstream entertainment is…too macabre for me. It should surprise no one that when I write down a thought that weighs on me or a strong feeling I have—one that is “wrong” and unacceptable for conversation or a social media post—it feels great when I sing it over my music. Maybe it doesn’t sound great [to a listener] but that’s not necessarily my problem. Self-expression 101: CATHARSIS.

TK: There’s a naive quality to the work that I enjoy—one that seems born of pure play—but you tend to work with virtuosic musicians. Can you tell me what your collaborative process is like?

GK: I don’t have chops, but I know about chops. If I’m going to ask someone to play on my stuff, I might as well ask the most skilled players I know, and I know a bunch of very skilled players. When someone is generous enough to play with me, I try to give them a lot of leeway. I have some knowledge of music school stuff—I had a short stint in jazz school trying to get chops and I dropped out because it wasn’t a good fit. I don’t think finishing jazz school would’ve actually led to making better music necessarily, or at least, music that expresses myself better.

TK: What role does humor play in your work? Is it an invitation or is it a way to keep listeners from getting too close to you?

GK: I have made work that could be considered purely humorous — Lobe Stub, Grim Shady, the unreleased $and Dollar — but that is kind of a deadly label because it means you simultaneously get less respect while being held to a higher standard, that of inducing the physical response of laughter. I have a lot of respect for comedians and “novelty music”. My main material uses humor to sharpen this and soften that. I’d say it functions in both ways you describe: it makes my spleen more spicy and digestable and blurs the fact/fiction line in name of artistic license and practical discretion.

TK: You had a reputation around town in the mid-oughts for disrupting tepid free improv shows. This fact immediately endeared you to me before I knew about your music. Would you mind relaying the details?

GK: I remember the first time I encountered the super quiet, “lower case” free improv music, maybe 2004. I walked into the Rotunda and everyone turned to me and stared in silence. It must’ve been between songs. I walked downstairs to the bathroom. When I returned I got the same stare. When I sat down I realized they had been playing the whole time, at an incredibly low volume—bowing tuning pegs, dry ice on hot plates, the whole bit. I put on the aural magnifying glass and was drawn to a new and rather fascinating world of microscopic sound. My short attention span could not sustain the level of focus throughout multiple sets, however, and by the end I gave into my craven impulse to use the gumball machine, which was a deafening racket in such a sonic environment.

Jump forward a year or so. Two musicians were noodling away at a piano behind a white curtain at the Lancaster Ave. CEC. In front of the curtain in the large performance area were two drumsets surrounded by a large ring of candles. I was sipping a beer and getting restless ten minutes into the noodle-fest when the performers started playing “Heart and Soul” as a joke, I suppose. I started tapping the bottle against the ground and another attendee followed suit. We tapped different little rhythms, getting louder until the other guy accidentally broke his bottle. I lifted my folding chair and slammed it to the ground. The wind from the impact snuffed a candle. I went around the ring snuffing each candle with a chair slam. I then sat at one of the kits and started banging away—first bursts of sloppy D-beat, then a steady slow rhythm. One of the performers emerged from behind the curtain and we played a drum set duet.

This whole business naturally upset the performers but generated positive feedback from some musicians in the scene who enjoy this type of rowdiness. I obliged them for a little while with some similar nonsense. I was at a show in a gallery with the bathroom taking up the corner of the main space. All the listeners had put on their aural magnifying glasses for the show to begin, only to train them all on the sound of the toilet flushing. As the poor innocent bystander emerged from the bathroom and got the same stare I got at the Rotunda, I had a notion to enter the bathroom and invisibly use it as an instrument, not in the obvious way we had just heard (flushing… how plebian!) but in the manner of extended techniques, tricks and gestures, et al. Bowing the bathroom’s tuning pegs, so to speak. So, I entered and rocked the bathroom: the sink, the tiles, the toilet brush receptacle filled with glass beads and so on. When I emerged I was banned from attending Bowerbird shows. I sent an apology to all of the performers of that set. One out of the four of them turned out to be totally on board with what I did. The rest, quite the opposite.

Within a few months, Nicole Bindler, friend of the dancer at that show, called me up and said she wanted me to disrupt a dance performance she was participating in. I agreed to the job, planned out a simple mode of attack, went to the show and found myself intimidated by the scale of the venue, the audience, the stage, number of performers etc. — I hadn’t cased the place. As I was steeling up my resolve to climb aboard the tall stage and fuck up the program, the whole thing was suddenly cut short. If it had turned out to be an elaborate form of revenge for what I had done to her friend, it would’ve been a brilliant tour de force in climax denial. Alas, that did not turn out to be the case.

I’m no longer in that business.

George Korien and Superlith perform at AUX on Thursday, September 24th; tickets and more information can be found here.