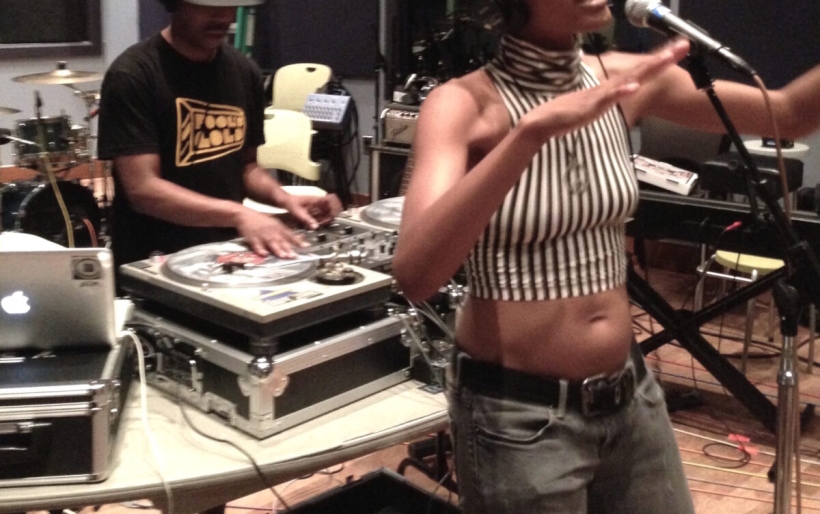 Like I said the other day: one thing Philly music industry startup RECphilly is amazing at is inspiring artists to collaborate. We saw that happen the first time we worked with them on a live audience Key Studio Session this summer; we saw it happen in a bigger way the second time around, which we present to you today.

Featuring an intimate crowd of about 50 fans and two rising stars of the Philly hip-hop scene, Joie Kathos and Armani White (plus a set from Milton and his band, which we’ll release a little later this fall), it was a hugely positive night of charismatic performance and impressive skill. And that’s before the improv cypher even began.

Kathos is a gifted lyricist with a clever turn of phrase and an honest perspective; backed by DJ Bear One (who we saw previously working the decks for Sugar Tongue Slim), she shares slice-of-life stories about growing up in Philly (“No Streets Peace” is an origin story of how hip-hop came into her life) and the dilemma of getting respect as a grassroots artist (“Gone”). She finds herself among peers who are all talk and keeps them in check (“Devil’s Advocate”) and delivers a stirring rumination on the #BlackLivesMatter movement (“Faded”). She plays Kung Fu Necktie this Tuesday, October 6th, and we highly recommend you catch her live; tickets and more information on the show can be found at the XPN Concert Calendar.

Armani White opened the night, and if you’re not familiar, get familiar – this dude is a machine. He rhymes at an impossibly rapid-fire, Eminem-like pace; lyrically, he’s a kindred spirit of J Cole, an even mix of braggadocio (“Allen Iverson”), humor (“Stick Up”) and sensitive introspection (the rarely-performed “T.O.L.L.”). White got a lot of attention across the internet this summer for “Young Adults,” which sort of combines all those traits, and after playing a send-off show last night at Pub Webb, he’s currently heading south with the RECphilly squad to rep the 215 at Atlanta’s A3C conference; he and a slew of others perform on Saturday, October 10th at a showcase designed to raise national awareness of the local scene and the Support Philly Music campaign.

And then there’s the finale, and I’ll have to agree with RECphilly’s Dave Silver on this one – the best part of the original concert was the improvised collaboration at the end, and after three fierce sets at this concert, the same thing happened, only in a bigger way. Milton’s band vamped, Bear One scratched, and Joie, Armani, Milton and Milton’s all-caps hype man Biz Mighty passed the mic back and forth for ten minutes. The best part: Biz finished his first verse, and Kathos – totally in awe – says “What’s your name again? This boy’s got bars!” Amazing.