By Brian Wilensky
October 20, 2015
02:10 PM
Share
Bridging Rap and Punk: The seeds of Friday’s cypher at LAVA came from Camae Defstar of Rockers! | Photo by D1L0 | via facebook.com/thegoodfolksatrockers

Last March, Ian Winter played bass in an impromptu rap cypher at the Lancaster Avenue Autonomous Space, better known as LAVA Space. It initially was a show booked by Camae Defstar, organizer of ROCKERS! and frontwoman of Moor Mother Goddess. But it ended up turning into an open floor jam with many MCs rocking the mic.

“We just jammed on one riff for a while and probably about eight or nine people freestyled on it,” says Winter, a member of the collective that runs LAVA Space and bassist for West Philly MC Ronnie Vega. He goes on to say a DJ eventually took over with his sample pad to keep the groove going.

The way that night turned into such a loose and welcoming jam was influential on Winter and he decided he wanted to book his own cypher with a live band. He wanted it to be an opportunity for either a show or a practice session for both MCs and musicians who are interested in both punk and hip hop.

Winter’s been involved with LAVA Space for about 10 years, so he’s well aware of the difficulty of finding funding to run the independent media center, which originally started as a hub for radical political organizations. It’s currently housing Human Rights Coalition, a prison rights organization; a writer whose main beats are education and incarceration, and a recording studio. 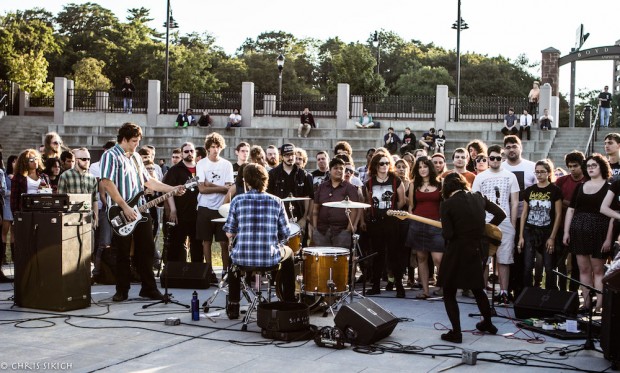 Screaming Females will act as the backing band | Photo by Chris Sikich | countfeed.tumblr.com

Now that it’s come time for LAVA Space to replace their PA system, which has been used for live music, parties and other similar events, Winter booked New Brunswick power trio Screaming Females – old friends of his – as the backing band for LAVA Space’s upcoming rap cypher this Friday, October 23.

Such a gig may sound a little unusual for the Screamales. However, just like the last March’s show at LAVA Space, there once was a similar occurrence at one of their shows.

“A couple years ago we were playing this show in Florida with a bunch of metal bands,” says Jarrett Dougherty, Screaming Females’ drummer. “I think we played last, it was a very loose show and there weren’t a lot of people there. Then we just started playing this groove and one of these big metal dudes grabbed the mic and started rapping. He was better than you’d think for being some real southern Florida dude.”

Bassist Mike Abbate continues with a laugh, “It happened a long as time ago when we were a lot more funky. He had some line that was like, ‘Screaming Females / Can’t buy them on retail.’”

The show will also include a full Screaming Females set, which is inclined to include all the jamming and improvisation that Dougherty, Abbate and guitarist Marissa Paternoster have made a part of their regular repertoire. Because of such playing, they may have an advantage for being for being able to groove along with any MC that takes the mic.

“We’ve been talking about what we should do a little bit,” Dougherty says. “We don’t have any solid plans yet. I mean hip hop has so many different styles. RZA’s beats are so different from Dr. Dre’s beats. Are we going to be tough and hard like New York hip hop? Or are we going to be smooth and funky like west coast hip hop? So we going to talk about that a little beforehand.”

Dougherty is confident he and Abbate won’t have a problem finding their pocket to back any rapper that night. As for Paternoster, he’s still a little curious what she’ll have in store.

“I think Marissa has the biggest challenge out of all of us,” he continues. “Bass and drums pretty much stays consistent across various styles of music. Whereas you don’t really hear guitar too much in a hip hop track. I think she’s going to be thinking of adding more subtle textures and such.”

Despite having never played with or rehearsing prior with any of the MCs on the bill, which includes Camae Defstar, Dominique London, Ronnie Vega and Khalil Ali, Dougherty realizes it isn’t about making statements with their music with the MCs ahead of time. That’s they aren’t prepping anything specific with the rappers. Rather they’re letting the music speak for itself that night, making it a one-time only affair.

“We’re going to be playing [alongside] people we haven’t played with before,” Dougherty continues, “so anything we prepare will go right out to the window as soon as we start anyway.”

As for Vega, a relatively new MC, he’s hoping the night will be a bit like that back in March.

“That night had a good energy in the air,” Vega says. “Bringing together the rap world and the punk world is something I’ve always been interested in.”

The DIY ethos of both punk and hip-hop is playing a major a major factor in melding all of this together as well. Without the open-mindedness of all parties involved, from Winter booking the event, to Dougherty and Abbate looking forward to collaborations with Vega and Defstar, a new PA system for LAVA Might not even be in the cards.

“We’re doing this because LAVA is a really important DIY space in Philadelphia,” says Abbate. “We feel it’s something we’re really connected to because bands we know play there when go through Philadelphia. And even though it’s not a place Screaming Females would play anymore, we feel it’s a really important part of our community. So, we’re making sure we’re still doing our part because everyone has to do their own part in a DIY community.”