Why is the Pennsylvania Ballet dancing to The White Stripes this week? - WXPN | Vinyl At Heart 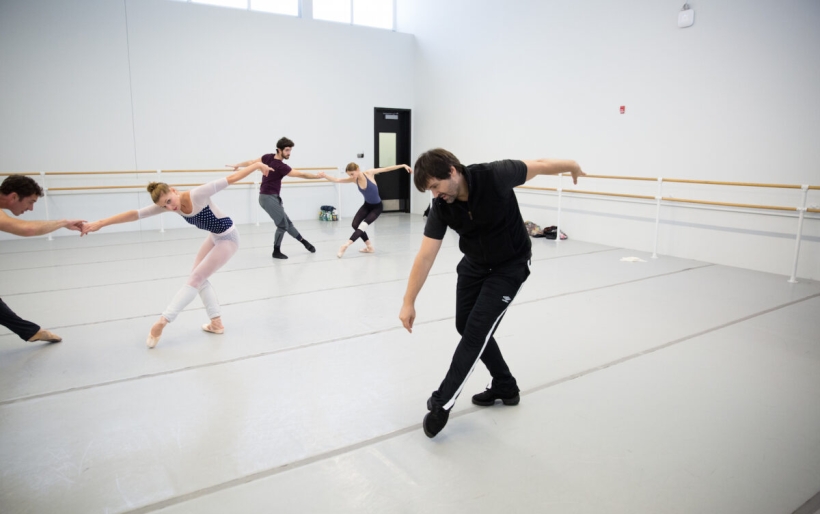 Why is the Pennsylvania Ballet dancing to The White Stripes this week?

On a recent Monday morning at the Pennsylvania Ballet’s North Broad Street studio, the halls are lined with dancers stretching and pacing, prepping themselves for their season opener. It’s called Speed and Precision, a production of three dances that runs the gamut from traditional to ultra-modern. The mood is more intense than once might expect from a ballet, and over in his office, artistic director Angel Corella uses the word “brutal” a handful of times in describing some of the choreography.

Principal dancer Lauren Fadeley has another word for it: “I’d say ‘violent.’ I’ve been scratched, I’ve been punched. Everything.”

Fadeley takes a lead role in Chroma, a 2006 piece by groundbreaking British choreographer Wayne McGregor. The dance is unconventional in several ways: it’s meant to highlight the body as a technical instrument, so the sets are very stark and whiteish-grey, as are the dancer’s outfits. No frills, no pageantry, just focused minimalism in black and white. It’s also unique in that the score, alongside original pieces by composer Joby Talbot, also features orchestrations of songs by Detroit garage duo turned international rock icons The White Stripes.

The idea that formal choreography has been set to the rough-and-tumble music of Jack White might seem surprising, but it makes sense: there’s a lot of brute rhythm and emphatic tempos in their discography, and Michel Gondry’s brilliant video for “The Hardest Button to Button” is incredibly focused on color and motion.

“When you hear that music, you can’t not want to dance,” says Fadeley.

What is more unique is seeing it in the context of the Pennsylvania Ballet, which some might perceive as hewing more closely to tradition. Corella wants to change that perception.

He came on board as artistic director in the middle of last year, and closed the season back in June with a well-received program that leaned heavily modern; one dance, Nicolo Fonte’s Grace Action, was set to the music of Philip Glass. Another one featured what Corella described as “strange synthesizer music,” and had choreographer William Forsythe telling the production crew “Turn the music up, make it louder, I want them to feel the beat.”

“Maybe one or two people were uncomfortable,” said Corella. “But we got standing ovations every day.”

Reached by Skype while he was setting up a production in Hong Kong, McGregor tells me about bringing pop music into the artistic world of Chroma. He says the composer Talbot suggested his orchestrations of The White Stripes, and when he heard them, it was a perfect fit. “I wanted to do something that was very visceral, very physical,” says McGregor. “And as a sound, something that connects with people very easily.”

McGregor works in prestigious ballet circles; his home base is The Royal Ballet at London’s Covent Garden, and he’s also been involved in productions at the Bolshoi Ballet in Moscow. But, he says, “I’ve worked with a lot of people who are pop stars – Mark Ronson, Jamie XX. I make no distinction between the work. Music is music.”

Fadeley says that the music in this piece has made working on it a hugely positive experience for her. It’s different from her normal experience, it’s exciting. She’s been with the Ballet for nine seasons and has performed a variety of work, but the closest she’s come to dancing to rock music before this was back in her school days when a dance instructor was a huge Zeppelin fan and had his students perform to “Stairway to Heaven.”

“The choreography embodies the music,” she says of Chroma. “That is always my favorite dance to do, where you have a connection to it. You can be doing amazing choreography but if the music is driving you crazy, the experience is not as fulfilling.”

Corella says that the music is one way of bucking convention, but also the visual aesthetic of the ballet. The combination there, along with the work just overall blowing him away when he first saw it, informed his decision to lead off this season with it.

“McGregor really created a new vocabulary for dance,” he says. “It’s a new kind of movement. A new way of vizualilzing dancers, what they do. The body goes this way but the head goes the other way, in a struggle with itself. A lot of dancers are in a lot of pain. But they’re loving it, having a blast. It’s a masterpiece.”

McGregor isn’t surprised to hear that reaction. “Dancers love to challenge themselves,” he says. “They’ve spent their whole lives training their bodies to exert themselves and do these extreme things.”

There’s a challenge posed to the audience too, but maintaining balance is important. Corella is trying to show that the Pennsylvania Ballet is not just about the dusty old classics, but also very much about the present – he sees that as key to the company’s future. At the same time, he honors the tradition by working those classics into the calendar; Speed and Precision also features Concerto Barocco by 20th century choreographer George Balanchine, set to the music of Bach.

“Funny enough, right after this [production featuring Chroma], we do The Nutcracker,” says Corella. “Then another modern piece in winter called Strength and Longing. Then Don Quixote, another classic.”

Fadeley likes mixing it up. “The Nutcracker is great because there’s consistency of it, you can come back to it every year and grow on it,” she says. “It’s great to have children involved, it’s great for the audiences at holidays, all that.”

But for dancers, the more interesting works are the ones that might not be the audience’s first choice.

“We always call them ‘dancer ballets,'” Fadeley says. “And something like Chroma is really stretching my boundaries as a dancer, it makes me find new ways to use my body, to pace myself, and put my energy in different places.”

Corella is confident that the production will be just as thrilling for the crowd. “People say that in Philadelphia, audiences are a little more conservative. But I think Philadelphia is ready for this new energy, this new beat.”

McGregor has seen Chroma produced dozens of times over the past ten years, in various settings around the globe. His takeaway is that cities and their crowds can’t be categorized into a big lump. “Audiences are made up of individuals, and audiences coming to this production often are not your typical audience,” he says. “In London, it was at The Royal Ballet at Covent Gardens, one of the oldest ballet companies around, which you’d think it would be extremely conservative. But people are interested in good work, people are interested in things that are different and unfamiliar.”

As Fadeley heads back into the studio after her break is over, she points out the new soundsystem. Right now, the Chroma dancers have been rehearsing to a recording of the London production, and the speakers do a fair job conveying the intensity of the music.

“But I’m really looking forward to doing it with a live orchestra,” she says. “Sometimes you don’t remember until you’re out there with the orchestra the power it has on you as a dancer, and for the audience to have that too, it’s going to be great – live music, live dance, all at once.”

And with the energy of a rock concert to boot.

Speed and Precision featuring Wayne McGregor’s Chroma opens the PA Ballet’s season tonight at the Academy of Music and runs through Sunday. Tickets and more information on the performance can be found here.