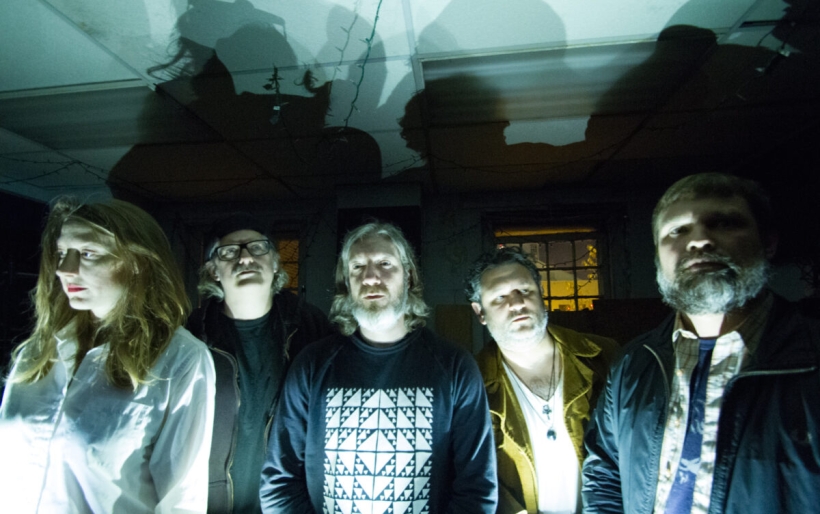 Acting on Instinct: The psychedelic foundations of Philly’s Tygaton

Rain is coming down on Delaware Avenue. It’s early October and Tygaton is completely audible from the opposite side of the six-lane highway. They’re exploring an immersive jam that sounds like it could’ve gone several more leagues farther down when it stops rather suddenly.

Guitarist and lead singer Ben Will, comes outside followed by his bandmates. Each has a bottle of Yards Extra Special Ale in hand, presumably bought from the brewery within eyeshot of where they practice. After a quick introduction everyone heads inside.

On the second floor of a building that appears to have either been an apartment building or a warehouse converted into rehearsal spaces for several bands. Right now there’s one practicing in another room just down the hallway. Filing into their room Tygaton shares with another band, they each sit by their respective instruments. It may be about – generously estimating – 15-by-18 feet; stacked with gear almost up to the ceiling and is nearly impossible to take a step through without there being a guitar or synth cable underneath one’s feet.

The five-piece psych outfit has some deep roots, which is what aids them in creating their highly evocative songs. Will and bassist Dave Moore have known each other since they were about 15 years old, playing in different bands around the Philadelphia punk scene, but never in the same one.

“We’ve been playing in the city for a while,” Moore says about his history with Will. “First, it was shows in mid-90s at the [First Unitarian] Church, then at the Khyber after that. Then Ben and I decided to get together a couple years ago and it started with just guitar, bass and a drum machine.”

Moore’s hardcore past in local punk band Bleed, is vastly different from the songs found on Tygaton’s two EPs, The Drift and Ricochet. Take the former’s airy “Rainbow,” which makes a compelling companion to the melodic “Deccan Drift” as their first EP ends. Then Ricochet employs a little more groove, pounding a little harder on every downbeat through “Pentobarbital,” a nearly tribal-like song that begs at a chant, while eyeing you from the other side of thick campfire smoke.

The Drift was recorded in late 2013, roughly a year after drummer Anthony Bove joined the band when he answered a Craiglist ad Will had posted. Despite being the fatherest removed from the rest of the group, he, Will and Moore all agree that they clicked instantly. Around the same time Bove joined, so did Gwen Rooker, adding synth, guitar and vocals to the mix. She and Will know each other from playing together in early formations of shoegaze outfit Acres of Diamonds.

Just when it seemed like the Tygaton lineup was complete Will and Moore’s longtime friend, Tim Scammell, moved back to Philly after a stint in San Francisco. Scammell says they jammed informally only a couple times when Bove happened to be at the next session and it just turned into a Tygaton practice, solidifying the lineup. “For everyone in this band it’s a lot about instinct,” says Will without any doubt in voice. “We aren’t the most polished players, or the showiest players, but all of our instincts are there. For example, that’s how it was when we brought in Anthony – he just had the instinct. He knew what to do with different riffs and such, and I thought that with Gwen. And then it was the same with Tim.”

With Tygaton becoming locked in as a five-piece they were ready to record their next EP. But this was also a great opportunity for them to take another look at their first release, which they admit always feeling it was incomplete. And the time in between the two recordings has helped them find who they are as a single, five-piece unit.

“It was like we developed our sound,” Rooker says. “And that meant we could revisit earlier recordings and that we had something cohesive at that point.”

She’s absolutely right. If you’re to play the two consecutively, they’re nearly indecipherable sonically speaking, despite being recorded almost three years apart. And much like their practice tonight, the majority of their music has come from loose, open jams that often result in different members recalling particular parts that they’d like to work with.

“We tend to start every practice with a long improvised jam,” Bove says. “Sometimes it’s like 20 minutes long; it’s not like we always plan on it being so long. But it can easily end up getting like that.”

Despite the size of Tygaton’s practice space, their recordings sound god-sized, as hear heard on “Mangled,” off of Ricochet, when Will’s vocals sound like they’re nearly pushing the needle into the red. Tygaton recorded Ricochet, rather appropriately, live in a big open room, which Moore says helped a lot with the album overall sound.

Both The Drift and this year’s Ricochet were recorded by Michael Gibbons of Bardo Pond. In addition to the room it was recorded in, Gibbons payed some extra attention to the new recordings to make them consistent, sonically speaking, with The Drift.

“We sat down and I had some settings in my gear that I dumped the old songs into to re-mix them,” Gibbons says. “And then we got all these new songs and they fit with the other ones.”

They were able to make the connection with gibbons because Will got to know Gibbons’ brother John, who’s also a member of Bardo Pond, through working at Rebecca Templeton Gallery in Fishtown. Gibbons having faith in his brother, he took Tygaton in with little reservation.

“To tell you the truth, I didn’t have a clue what they sounded like,” Gibbons admits. “All I knew is that I liked Ben and I knew he would be doing something cool.”

There’s usually something to be said about the company you keep. With their connections to the folks running R5 Productions, they’ve been able land some solid psych gigs opening for Moon Duo and Spider Bags at Boot & Saddle, to name a couple. However, Tygaton gigs seem to come about only every other month at best, which means their gig on November 21 at Everybody Hits may be your last chance for a little while. But if you were ask Tygaton why they play at the schedule they do, Scammel has an easy answer for that.

“We try to not to play too often because that way we know we can grab some people that wouldn’t normally come out too often. We try not to wear it out.”

Tygaton performs this Saturday, November 21st with Aye Aye, Louie Louie and Writing Squares. More info on the show can be found here.