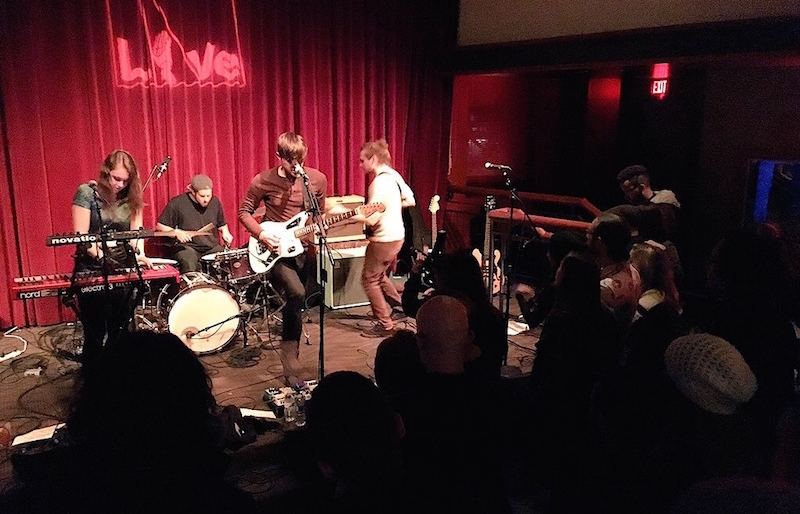 After celebrating their year-long singles project at World Cafe Live on Saturday night, Philly’s Sonnder released their 12th new song of 2015 today. It will be a free download until New Year’s Eve.

Like their gig-mates Summer Scouts, the seven-minute “Entanglement” blends atmospheric post-rock reminiscent of The Album Leaf with hooky modern rock a la late-era Smashing Pumpkins. It’s the title track of the LP the band is releasing this March, which will feature remixed versions of all 12 songs from the 2015 project along with two unreleased cuts and interludes.

This song definitely sums up the entire theme of the album: being caught in a place in which you know will bring you no good, yet you stay. Why do you stay?!? So often I look back at my own life and the lives of others around me, and think why did you stay in that darkness for so long? Why couldn’t you just leave? What makes us stay in relationships we hate or career choices we regret? We can change our situations any second we truly want to. In this case, Entanglement is about a vitriolic loveless relationship, but perhaps it didn’t start this way. It’s strange, this project really has allowed me to observe and reflect on the various emotions that generated each song and come to terms and accept them. Some aren’t easily accepted though. This song strikes very close to my heart and I wasn’t expecting to be feeling it as much as I have been lately. Even though the incidents that caused the creating of this song happened over 2 years ago, it is such a poignant subject that it is hard not to let it creep in too much and cause me to look around at my current situation and wonder if I am doing what I should be doing and with the right person/people…