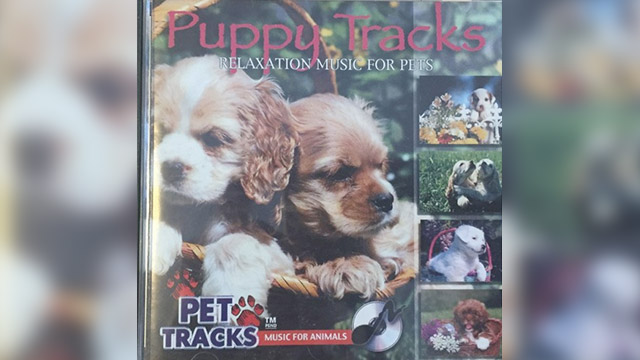 They call it puppy love: listen to the soothing, relaxing, meditative sounds of Puppy Love

Image via http://www.chartattack.com/
Looking for some soothing sounds for your puppy? Look no further than Puppy Tracks a seven song collection of chilled out instrumentals, “relaxation music for pets.”

As reported on the WXPN Morning Show by XPN’s Bob Bumbera, according to the music web site Chart Attack, Puppy Tracks has seen the light of day thanks to its discovery by Toronto animator Leslie Supnet, who found it in her mother’s CD collection. Çhart Attack’s Kristel Jax writes that Supnet’s mom:

bought Puppy Tracks, Papyrus font, drugstore calendar artwork, and all. The album has since lived as an item of dreamy, forgotten kitsch and turn of the millennium sincere-core aesthetics, until this past holiday season when it was rediscovered in all its squee splendor. Like a series of pre-internet motivational posters rendered in audio waves (perceptible to both humans and dogs — I tested it), Puppy Tracks includes song titles like “Tender Moments,” “Fairy Tale Time,” and “Fearless Puppy,” with some songs running near the ten minute mark. Sonically the CD generally features reverb drenched synths, a lot of babbling-brook, some downtempo percussion and wind sounds.

Puppy Love has been uploaded to Soundcloud. It’s a relaxing listen for your puppy, and quite honestly for any pet and even yourself. Listen to it, and chill out big time, below.