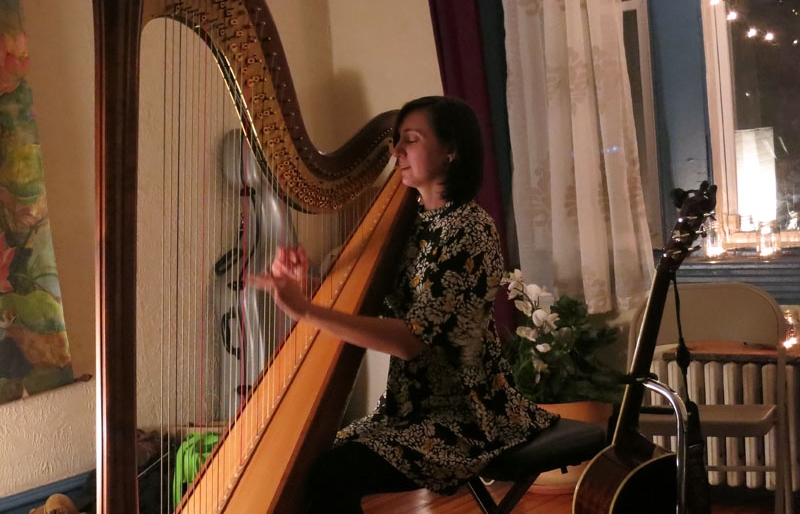 Ciavolino is a harpist and organizer of local shows, such as the CADBI benefit shows occurring this winter at W/N W/N | Photo by Kate Bracaglia for WXPN

Tuning In: How Philadelphian Liz Ciavolino uses music to foster community and activism

Liz Ciavolino is who you want as your neighbor. The 20-something Philadelphian is all about fostering community, whether it’s organizing DIY shows in her backyard, playing for tiny, living room crowds, or getting involved in local politics. For her latest project, a series of benefit concerts for the Coalition to Abolish Death by Incarceration, it’s a little of all three—the series, which kicks off January 17, aims to raise awareness for prison sentencing reform as well as introduce Philadelphians to local talent.

For Ciavolino, it’s a natural pairing. A musician since childhood, whose interest in grassroots activism was sparked in college, she grew frustrated upon graduation when she felt forced to pick between the two. Until she realized she didn’t have to.

“When you’re in a band, you can attach your name to so many things. So why not attach it to something important?” explains Ciavolino, who fronts her own band, Liz & The Lost Boys, when not teaching music.

The benefits will be held the third Sunday of each month through March at W/N W/N in Northern Liberties. A septet of bands will perform, including Ciavolino’s Liz & The Lost Boys (playing February 21 alongside Tutlie), Ellen Siberian Tiger and Vessna Scheff (playing January 17), and Little Strike, My Son Bison, and Bora (playing March 20). As for the beneficiaries, the Coalition to Abolish Death by Incarceration (CADBI), Ciavolino was drawn to the organization due to their local roots and important cause: A poster for the CADBI benefits, designed be Georgette Flanagan

The “one, tiny little law” is the Pennsylvania policy on life sentences for prisoners, which defines a “life sentence” as one’s natural life, without possibilities for parole. In Pennsylvania, there are over 5,000 people serving life sentences who will die in prison as a result.

“It’s an important issue,” says Ciavolino, at West Philly’s Dock Street. “And Pennsylvania’s laws are particularly harsh.” She goes onto explain that in other countries, life without parole for juveniles is unconstitutional. In PA, there are nearly 500 juveniles serving life sentences—more than any other U.S. state. CADBI works to advance legislative changes that will reform sentencing and protect human rights.

The benefits will include presentations from CADBI and umbrella organization Decarcerate PA, in addition to the live music.

By combining music and politics, Ciaviolino hopes to draw a crowd who might agree with CADBI’s mission, but might not have sought out the organization otherwise.

“Showing up at a political meeting can be intimidating,” she says. “And I think people in general tend to feel disengaged. This is a way in that hopefully makes it easier to get involved.”

She counts as her inspiration decades of music activists, from the 1960s protest era to contemporary artists like Dev Hynes of Blood Orange, whose 2015 single “Sandra’s Smile” helped raise awareness of the controversial death of Sandra Bland, who was killed in police custody in Texas last summer—and indie-folk band Hooray for the Riff Raff, who crowd-sourced donations to the Trayvon Martin Foundation and the Third Wave Fund, in addition to releasing their own single “Everybody Knows (for Trayvon Martin).”  Locally, she cites the recent series of concerts benefiting Democratic Presidential Candidate Bernie Sanders, which have drawn hundreds of young people interested in music and reform.

As for W/N W/N, she liked the space’s warm, welcoming nature and the fact that’s cooperatively owned. “I wanted a spot where the crowd can feel engaged. There’s a great community there,” she says. “Why not use it?”

As Ciavolino and I wrap up our interview, I head over to the Ahimsa House a few blocks away in West Philly, where she’s performing a solo set as part of their Candlelit Music series. It’s a tiny, living room space, and admission is free—I take a spot on a pillow on the floor and sip complementary apple cider as I listen to the first band, Snagwing, weave a warm tapestry of folk vocals with guitar and strings (check out their new, great EP Triangle here).

Ciavolino is up next, accompanied by one of her oldest partners, her harp. She’s played the instrument since she was 9 years old (“I was young and got enchanted”) and it’s clear—her playing seems effortless, and her songs—self-penned—are witty and engaging, her voice soaring above the chords.

Ciavolino tells me she generally prefers smaller house shows like this where there’s no pressure to bring in a big crowd, unlike certain club shows (though I’ll note this particular show is PACKED)—and where the focus is solely on the music, rather than hanging out at a bar, drinking. During the set, I’m impressed with how reverent everyone is, and chatting with other concert-goers between sets I note general good vibes and a sense of community.

It reminds me that getting involved can be as simple as showing up and listening, and treating others with the same respect we desire ourselves.

“In the city of Philadelphia there are so many small things we can do,” says Ciavolino. Tuning in is an important first step.

The Coalition to Abolish Death by Incarceration benefit shows are January 17 (with Ellen Siberian Tiger and Vessna Scheff), February 21 (with Liz & The Lost Boys and Tutlie) and March 20 (with Little Strike, My Son Bison, and Bora); all at W/N W/N, 931 Spring Garden St., all ages, $10–20 donation recommended.