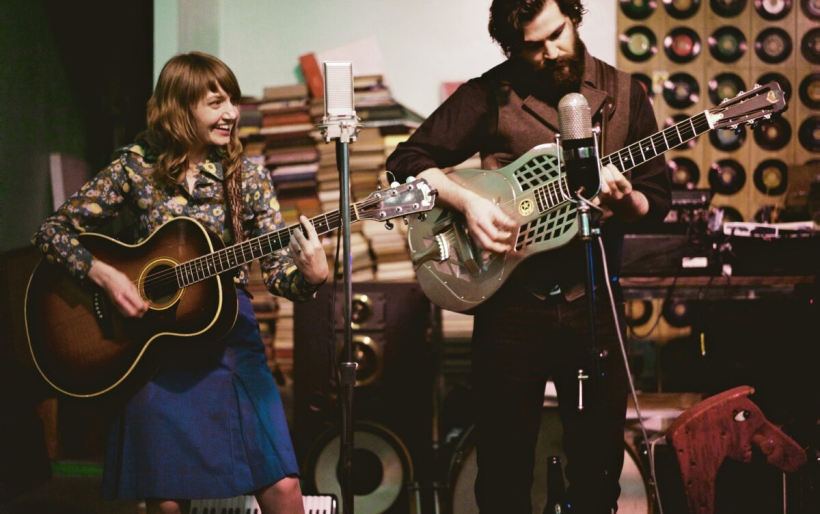 Second to the music, which draws and binds us together, is our shared history with the musicians, which seems to deepen with time. It’s an amazing privilege with Folkadelphia to queue up tracks for a radio show, scroll down the playlist, and think to myself “it was great helping so-and-so out with their last two shows in Philly” and “oh man, I can’t wait for us to premiere such-and-such’s in-studio session that we recorded three months ago, what a blast!” In this folksy music world of ours, when we’re drawn together, we tend to stick together. Then, as albums are released, music is shared, tour dates are booked, on the Folkadelphia side of things, we feel such tremendous pride in hearing and seeing artists evolve and that we possibly lent the smallest little help along the way here in Philadelphia.

Since I met Detroit based duo Lac La Belle through a chain of emails coordinated by Philadelphia musician Eric Carbonara (and producer of Lac La Belle’s recent releases), we’ve tended to keep in touch. While I was booking a Philly gig for them in 2012, I fell deeply under the spell of their first two releases – their self-titled debut and that year’s Bring on the Light. Nick Schillace and Jennie Knaggs present a no-nonsense modern take on the traditional American folk traditions. Sure, many people present that style, but Lac La Belle do it with such rare grace and finesse that the listener is easily drawn in. The duo then released my current favorite album of theirs, 2014’s A Friend Too Long. The band does so much with so little – nothing about the album is bombastic, but it isn’t overly subtle either. It’s just a perfect capturing of two people locked together in a groove playing their hearts out. For their Folkadelphia Session, they shared these songs from A Friend Too Long with us in the studio.