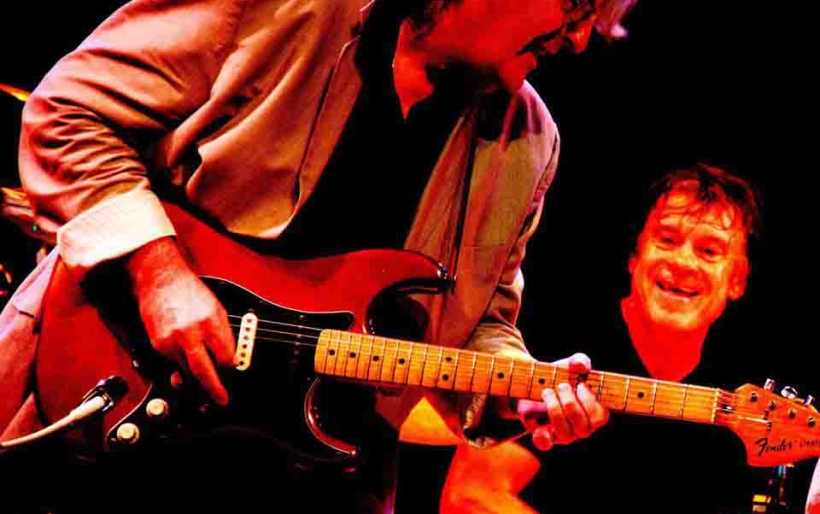 T.J. Tindall Photo by Steve Acito | courtesy of the artist

It’s with a sad heart that we’ve learned of the passing of guitarist Thomas Joshua Tindall. Inducted twice into the Philadelphia Music Alliance’s Walk of Fame as a member of MFSB and the Salsoul Orchestra, T.J. Tindall played on numerous hits born out of the legendary Sound of Philadelphia. According to his publicist, he was 65 and died suddenly.

“He was a vital member of MFSB’s famed rhythm section, which laid the foundation for the Sound of Philadelphia,” said PMA Board Chairman Alan Rubens. “You can hear his guitar on so many great hits out of Philadelphia from the ‘70s and ‘80s, from ‘Disco Inferno’ to “You’ll Never Find Another Love Like Mine.”

Tindall’s long list of credits is mind blowing. He was a very soulful guitarist who played on over 30 gold and platinum hits produced by legendary “Sound of Philadelphia” architects Kenneth Gamble and Leon Huff (Gamble & Huff) for artists such as the O’Jays, the Trammps, Lou Rawls, Teddy Pendergrass, Harold Melvin and the Blue Notes, Blue Magic, the Intruders, and the Three Degrees. He also played and recorded with Bonnie Raitt, the Chambers Brothers, the Jacksons, Robert Palmer, the Temptations, and many others. More recently, the Trenton, New Jersey, native came out of retirement to play and record with In the Pocket, the Philly tribute collective led by drummer David Uosikkinen of The Hooters.

Tindall got his start in the Trenton music scene in the 1970s, as guitarist for local legends Duke Williams and the Extremes, and went on to play guitar with the Philly band, The Edison Electric Band.

In a 2013 story about him in Princetoninfo.com, writer Alana Shilling had this to say:

TJ’s break into the R&B scene did not come easily. He describes constant trips to the studio of top Philadelphia soul music producers, Kenneth Gamble and Leon Huff, begging for a chance to play. Bemused by the past, Tindall remembers, “There I was, this white hippy guy with long hair asking to play for an all black rhythm section of the Philadelphia soul movement.let’s just say they had their doubts.”

In 2013 when MFSB was inducted into the Philadelphia Music Alliance Walk of Fame, Tindall spoke with The Philadelphia Tribune about his experience playing in the band:

“It’s funny,” said Tindall. “My feeling about being part of that whole thing is, I don’t think you could buy an experience like that, so whatever we got or didn’t get, just to be part of that for that 10, 15 years was just unforgettable. It was one of the major points of you life, so I’m just extremely thankful that I was involved in that.” Eli concurred saying, “I was fortunate and blessed to have been part of it, really. It was a great training ground, it was better than any kind of university, just being there. I did learn from them. I mean, Gamble and Huff were good producers, and you kind of learn what to do and what not to do also, at the same time.”

Tindall’s daily studio pilgrimages paid off, and in 1970 he finally got his chance to perform, by accident or more accurately because of an accident. A guitarist for Edison Electric Band had a motorcycle accident, and Tindall was brought in to cover and, he says, was immediately adopted by the music crowd.

Below, listen to some of T.J.’s work including a single he cut when he was in The Edison Electric Band, the classic “Disco Inferno,” a video about In The Pocket’s remake of “Disco Inferno,” featuring T.J., and a live television performance with The Chamber Brothers on the Mike Douglas Show from 1972.

Our condolences to his family and friends. More information will become available as we get it.