Time Capsule: Justin Pittney of Residuels reflects on his commute in “The Castle” - WXPN 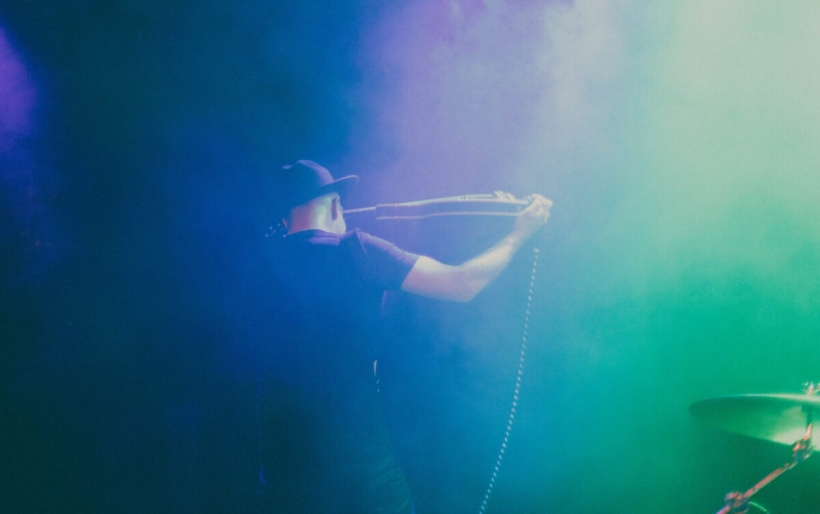 Time Capsule: Justin Pittney of Residuels reflects on his commute in “The Castle”

If you took the Market-Frankford El from Fishtown to Center City day after day, morning and evening, you’d probably consider the most scenic thing about it to be the people of SEPTA dosing off in the seat next to you. When Residuels’ front man Justin Pittney took that daily commute to his day job as an Art Director, he noticed something beautiful.

“There was a point in the day—early in the morning—where the Delaware River looks really pretty,” he told us. “And there was an old prison in Camden that I always looked at. I would always fixate on it. To me, it looked like a castle in the middle of all this weird, industrial shit.”

So one of those mornings, he wrote a song about it in his head. First humming a melody into his phone and then writing lyrics to support it. That was probably the only time he’d ever really figured out the chords and music post-melody and lyrics in the 25 years he’d been writing music, and it was six years ago.

This summer, Residuels will release the first proper full-length from the road-rashed punk band. “The Castle” made it onto the new record, after years and years of fine tuning and experimentation. “I tried playing this with some of my older bands,” Justin admits, “and it never worked. But now, with Residuels, it sounds now the way it did in my head back then, when I wrote it.”

Read our interview with Justin below, where he talks about how a slight obsession with The Kinks helped bring “The Castle” to light, and how changing up his writing process for the song forced him to rethink—and expand on—his music writing process.

The Key: What were you doing when you wrote “The Castle”?

Justin Pittney: I lived in Kensington and I had this really cool house that was like 3800 square feet and $1200 a month. You could tell it used to be a party house at one point because I would get pizza delivery and people would be like, “Yo, I saw some crazy shit there!”

TK: The pizza guys would say this?

JP: Yeah, they’d be like, “Who else lives here?” And I’d just tell them me and my girlfriend. It was really neat. It’s right on the corner of Susquehanna Ave. and Amber or Dauphin. They used to have a lot around it and now it’s all condos, which is kind of weird.

TK: You mentioned when you wrote the song, you came up with the lyrics and melody first. How did that affect the music?

JP: Well, then I had to go back and figure out what chords were behind it. And they’re really weird and kind of all over the place, which I was psyched on.

TK: Do you think they were weird and different because of the switch up?

JP: I think so. Usually it’s music first, and then I come up with the melody. Also, this was the first time I was writing about something else, it wasn’t at all directly related to me. At the time, if I had a top favorite band The Kinks would probably be one through three and then Love would probably be in there, too.

TK: How did The Kinks inspire “The Castle?”

JP: The demo version, the one that we’re talking about right now, the beginning is totally a Kinks rip off. The album version doesn’t have that, but this version is so honest in that. My favorite thing about The Kinks is that they tell stories really well. There will be a line in a song and that line will tell you so much, so I tried doing that a little bit.

TK: So you were thinking about The Kinks stories when you were writing the lyrics?

JP: Kind of, I think at that time I almost consciously was writing like The Kinks. Right around that time I went and saw Ray Davies, and I remember being really stoked. Because of punk, I guess, and being in lots of weird political bands when I was a teenager, I always wrote about direct things—and this was my first attempt outside of that.

TK: Do you think it’s something you continued, or did you go back to that more direct style?

JP: I think that was actually a fork in the road. I still write somewhat direct stuff, but it was the first time I wrote off of mood and vibe alone. All of the music around it is trying to convey an emotion.

TK: How is this demo different than the version we’ll hear on the record?

JP: For the record, I recorded an electric guitar part throughout just by myself. Then I recorded some acoustic stuff and drums, which is not on the demo. The newly recorded version is very not us, so to speak. Like Mike [Cammarata, The Residuels drummer] played brushes on it. But it sounds now the way it did in my head back then, when I wrote it.

TK: So it took six years to work out and come to fruition?

JP: Totally. And I don’t think we’ll ever be able to play it live. Because I can’t see him playing brushes, or there being layers of acoustic guitar [laughs].

This May, Residuels goes on a U.S. tour with The Buzzcocks – more information and tour dates can be found here.