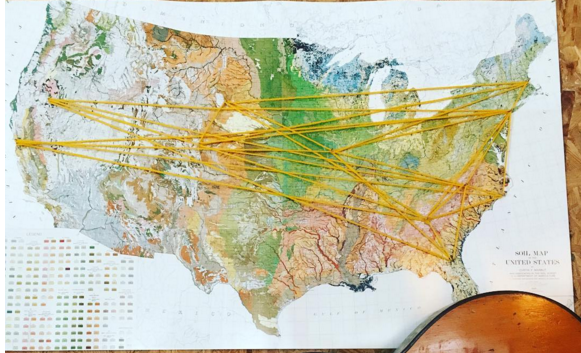 We’ve arrived at @mountmoriah_nc’s studio and found this very cool artwork I the wall. Can anybody guess what it is? #WCSOPNC #map #unitedstates #mountmoriah

North Carolina alt-country rockers Mount Moriah just released their new album How To Dance, and to coincide with its release the band has put together a interactive map about the album on their website.

Pretty cool, huh? While visiting Durham last week, the World Cafe team visited Merge Records (Mount Moriah’s label), met the band, and recorded a session with them at their home studio. While there, they saw the picture above on the band’s wall and believed it to be a tour route. Close but no cigar. The map points out all the geographical references they make in the album’s lyrics.

For me personally, I love when musicians reference certain locations in their songs and music. It focuses the song and brings the music to an exact point, giving it a central feeling of connection and understanding, but at the same time creating myth and mystery around it. It’s like when Springsteen sings about “the jersey state line”, or when Dylan is “Stuck Outside of Mobile With The Memphis Blues Again”, or the many MANY songs written about California. It connects with the listener and brings them directly into their experience. And it’s even cooler when you end up at that place yourself.

Especially for a band like Mount Moriah, one that makes rootsy road trip music, you can trace the band’s journey while listening to How To Dance, like when they sing about I 95 on “Higher Mind.” You feel with them the wanderlust and the stops along the road that they experienced and documented. And after everything, isn’t that the point of American music as a whole?

How To Dance, Mount Moriah’s second album, is out now via Merge Records. The band will be at Boot & Saddle this Saturday with Skylar Gudasz. More information and tickets for that show can be found here.

Check out Mount Moriah’s interactive map for How To Dance below and watch their video for “Precita.”