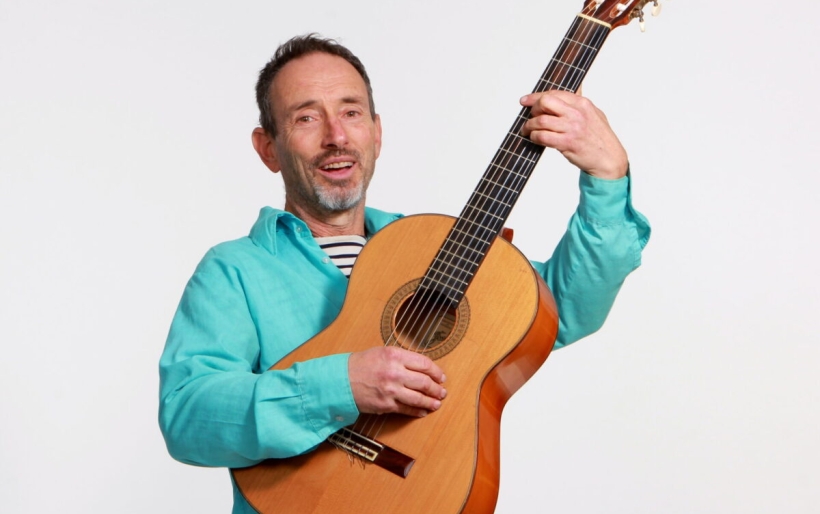 Jonathan Richman will forever be best known, among a certain perennial segment of cool kids, for The Modern Lovers, a collection of disowned demo tapes by his teenage rock band that, depending who you ask, possibly maybe invented punk music.2016 happens to mark the 40th anniversary of that record’s 1976 release (although it was recorded several years earlier.)

But it’s hard to imagine an artist lesslikely to commemorate such a milestone, in today’s customary, backward-gazing fashion.Richman turned his back on anything resembling punk as we know it – while deeply, radically embodying its contrarian ethos – with the light-hearted ‘50s-style ditties and goofy, childlike glee of Jonathan Richman & The Modern Lovers – which was also released in 1976, and which possibly maybe invented indie pop – and he’s never looked back.

Since then, lots has changed, but everything’s pretty much the same.  Ishkode! Ishkode!, roughly Richman’s 20th album, finds him continuing along his own idiosyncratic path – striking a contemplative mood more than usual, exploring a few new themes, trying out some slightly novel arrangement ideas (and, with the titular Ojibwe, adding another language to his impressive repertoire) – but its core remains that same wide-eyed wisdom and insouciant, irrepressible spirit he’s carried all along.  Who else could, or would, write a song about the feelings of a kid whose parents are dragging him away from something he wants to look at (the bouncy, bilingual “Wait! Wait”)?  Or base another around an observation as simple, honest and perceptive as this: “When I feel the sex drive rise in me / without the heart as chaperone / I feel an arrogance there…”?

In advance of Richman’s appearance this Wednesday at Union Transfer – which promises to be another in a long line of heartfelt, inspiring, utterly delightful performances; accompanied as always by the trusty Tommy Larkins on the drums – we conducted the following exchange.  After playing some phone tag attempting to schedule what he thought was to be a radio interview, I reached Jonathan at his home in Northern California, where he politely and charmingly explained to me his policy against interviews for print publication (citing, among other things his tendency to ramble.)  But he agreed to answer some written questions “via fax.”  (He doesn’t own a computer, nor, as memorably expounded in this little number, a cell phone.)  So I wrote out some questions, scanned them in and e-mailed them to his publicist, who faxed them to him and then transcribed and sent back his hand-written responses.

KRH: I’ve loved your music since I was about ten years old, when my uncle sent me a CD of Having A Party With Jonathan Richman, so it’s a thrill for me to be able to ask you some questions.  It’s been almost six years since your last album.I know that you and Tommy have done plenty of touring since then, but what else have you been up to recently?I hear that you have a masonry business?

JR: I didn’t realize it had been six years! I thought O Moon, Queen of Night came out 3 or 4 years ago. Oh well. We tour and record every year. And yes I do stone and brick work. I build bread ovens, also patios and garden walls.

KRH: This is not only your first album on Blue Arrow Records, it’s the first one they’ve ever put out.What’s the story there?How did you get connected with a label run by a record store in Cleveland OH that, apparently, so far, only exists to release your music?

JR: Blue Arrow Records has a record store as well. This is in Cleveland. We met Debbie & Pete many times on our trips there.

[Blue Arrow’s Debbie Gulyas elaborated: My husband Pete and I have known Jonathan and Tommy for 20 years, meeting when we had a vintage clothing store near a club in Cleveland where they often played. We now own and operate a vintage vinyl record store. A few years ago Jonathan asked us if we would sell merch for him on east coast tour dates and that evolved into becoming his record label. We did start the label for Jonathan’s music and have more artists on the way – one is Jon Langford’s (Mekon’s and Waco Bros.) new band Bad Luck Jonathan.]

KRH: The first song on the album, “Whoa! How Different We All Are!” – I think this might be the saddest song you’ve ever written; you sing about how we each have “our own secret sorrows.”(This idea is echoed in the second song, the title track, where you describe bonfires as a conduit that helps us to express these sorrows.)And the album in general feels a bit more pensive and downcast than we’re used to from you.Has there been any particular sadness in your life lately, or reasons why sorrow is on your mind?

JR: That’s funny! It goes to show you can’t tell what people will get from songs! I thought both of those songs were happy! They just tell the truth is all. Sorrow happens, no?

KRH: You sing about meditation in “But Then Ego Went Away,” while the last song on the album, “Mother I Give You My Soul Call,” is a cosmic chant from Paramahansa Yogananda.Both of these introduce Indian instrumentation in your music for the first time.Can you tell me a bit about your meditation practice, what role it plays in your life, and how it relates to your work as a musician?

JR: I meditate most every day, sometimes twice or three times, and music…well music helps me get there. To that place where the mind gets slowed down. Meditation even affected the first Modern Lovers album! I’ve been doing it that long. Check out “The Suti Message of Hazrat Inayat Khan.” He also lectured in book form, on music and sound. And have you read “Autobiography of a Yogi”? I recommend that one, too.

I’d say the main effect of the Indian musical instruments on the music is they emphasize the root note and the fifth with no third, so they accompany the voice without leading it to major key nor minor. Also, such instruments don’t force the melody into our modern “equal temperament,” which changes the sound a lot.

KRH: You’ve written songs about some your favorite artists (Van Gogh, Vermeer, Dali) and musicians (The Velvet Underground, Keith Richards.)Do you have a favorite book or author?What about a favorite movie or filmmaker?

KRH: My buddy Steve wants to know: what is the best meal to eat before or after a show?

JR: Whatever your body says!

KRH: I just had a baby daughter (my first), and I just found out that you also have a daughter.I wouldn’t ask this of just anybody, but – do you have any parenting advice?Or any stories you’d like to share about being a father?

JR: Enjoy! I wish I could have been home more! Congratulations!

KRH: Along similar lines, I was wondering what your relationship with your own parents was (or is) like.What did they (or do they) think about your music?

JR:They got used to it.

Jonathan Richman plays Union Transfer on Wednesday, April 6th; tickets and more information on the show can be found at the XPN Concert Calendar.