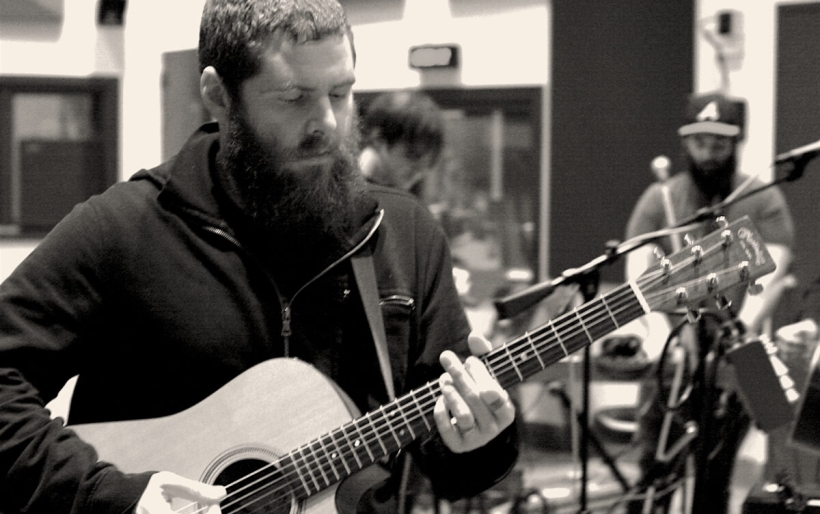 Vocals Only: Andy Hull on scoring a film using only his voice

Fans of Manchester Orchestra know that Andy Hull’s voice is sometimes at its most powerful when it’s quiet. Sure, he can push his volume and power over the sailing, distorted guitars, but it’s when he’s at his quietest where he lets much of his emotion come out through trembling melodies and rich harmonies. You can also hear it in his solo project—Right Away, Great Captain. Now, along with Manchester Orchestra bandmate Robert McDowell, Hull used the power of the voice, and the voice alone, to score the film Swiss Army Man, which stars Daniel Radcliffe and Paul Dano. And it was not easy.

“It’s taken me 12 years to learn all of the music lingo and everything, how all that works, and this was like a totally different language,” Hull says. “Robert and I had to learn how to talk to each other in a new way, because we couldn’t use the same phrases we used when we talk [about Manchester Orchestra songs.] Because a lot of this stuff doesn’t really have a tempo—it’s sort of flowing and moving, so we can be otherwise like, ‘Let’s start on the one,’ or ‘Right after the burst,’ there’s no burst. It’s just voices floating sort of.”

By creating these melodies, which he calls “ghost ships” due to their haunting and floating nature, Hull and McDowell created an off-beat score for an equally off-beat movie. The IMDB description reads, “A hopeless man [Dano] stranded in the wilderness befriends a dead body [Radcliffe] and together they go on a surreal journey to get home.” (Word on the street is that viewers can expect a character riding a farting corpse across water.)

“At Sundance, it was a bit polarizing because a lot of people didn’t know what to do with it,” Hull says. “I think a lot of people thought it was going to be this real sweet drama. And it’s a really sweet movie, but it’s not ‘Good Will Hunting’ or something.”

And it’s not like Hull has nothing but free time on his hands—he has Manchester Orchestra, his solo project (Right Away Great Captain), and Bad Books with his pal Kevin Devine, and has been producing (and playing on) the new album by All Get Out. He also has a small child. So why would he decide to take on a sprawling project like this? He’s never done anything like it. Why this particular movie? It turns out that film is something Hull values almost as much as music, and it was even more exciting that he got to work with friends.

“We did a music video for our song ‘Simple Math’ several years ago with a team of directors called The Daniels,” Hull says, referring to Daniel Scheinert and Daniel Kwan. “And we had such an awesome experience with them and just remained friends with them. They started writing this movie, and they were actually doing a treatment for ‘Every Stone’ from our last album.”

Unfortunately, The Daniels weren’t able to make a video for “Every Stone” because they were involved in the Sundance Labs—a workshop for independent filmmakers at the famed film festival. Right before the festival, however, Hull received a message.

“I got a call from them at the end of last year, right before Sundance, and they said, ‘Hey man, we’re working on a movie,’” Hull says. “They told me a little bit about it when we were talking about the ‘Every Stone’ thing, and they said, ‘Would you be interested in writing a couple songs for the movie?’ And I said of course.”

So, after reading the script, Hull and McDowell sent The Daniels a song, and they said it was exactly what they were looking for, so they wanted more. It was actually The Daniels’ idea to do take the vocals-only approach, and Hull and McDowell were up for the challenge.

“Slowly this morphed into, ‘Hey, do you want to score the entire movie?’” he says. “It was a big question because I think … I know … it would’ve been easier for us to say, ‘Well, let’s do a couple songs for it. Somebody else can score it.’ But we just wanted to try it, and it was like the craziest year of school and excitement that I’ve ever had.”

It certainly would have been easier for them to only make a song or two. Hull says the film is about an hour and a half long, and they created 72 minutes worth of music. 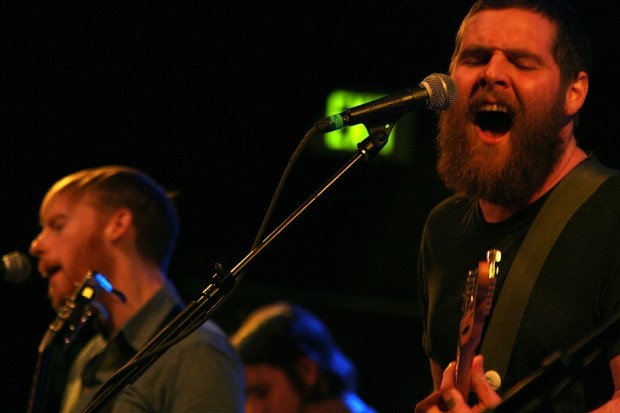 “We’ve never had a record longer than 46 minutes,” Hull says. “It was just a full year of work.”

In that time period, Hull and McDowell went into the studio with Radcliffe and Dano and tracked vocals that they had written with them to go along with their melodies. If Bad Books is an indie rock super group, this was a cinematic super group.

“They killed it, and it was wild experience, man,” Hull says. “I basically made a record with those two dudes. It’s a lot of looped voices. Like, Paul would start singing and then it would repeat and Daniel starts singing, and then my melody comes in over top. A lot of it, in the movie at least, is my voice as the ‘band’ and their voices as the lead singer.”

Returning to their day jobs, Hull says that the lessons and McDowell learned during this time already shows up in their work.

“We were editing this All Get Out record, going through and doing the final additions to their record right after we got home from L.A. finishing the movie,” Hull says. “And what you do when you’re editing a movie is you watch the movie in reels. There’s a time code at the top, and everybody would just watch and make notes on a note pad. And there would be one leader in the room who would stand up and say, ‘All right, everyone, who has the earliest note?’ And we’d just go through all the notes and consolidate them into a file and bang them out all day long. So we just took that process because it’s genius! It’s way easier to do that than sending in notes on mixes.”

He says that the art of creating “ghost ships” will stay with them when making the next Manchester Orchestra album, too.

“It was realizing that you don’t really need instruments to make things super powerful, which I knew, but I didn’t know if we were going to be able to accomplish it,” Hull says. “That’s certainly bleeding into the thought on how to produce the next record.”

Andy Hull plays an acoustic set, full of tunes from all of his projects, tonight at Underground Arts with Casey Crescenzo of The Dear Hunter and Nathan Hussey of All Get Out. More information on the show can be found at the XPN Concert Calendar. Also, keep an eye out for Hull’s quick on-screen debut in “Swiss Army Man.”