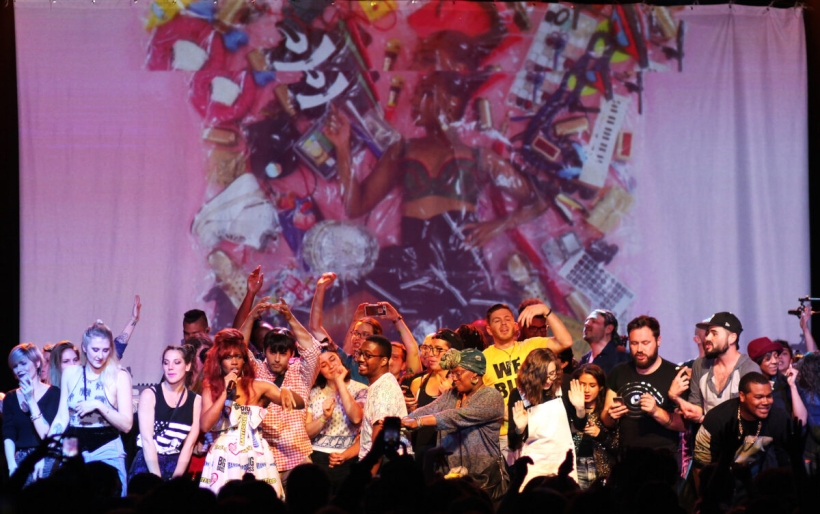 Santigold throws the ultimate homecoming party at the TLA

Santigold’s Sunday night performance was the ultimate homecoming for the 39-year-old singer and songwriter.

“I have been to so many shows here,” the Mount Airy native told the sold-out crowd at the TLA. “It looked so much bigger in here then, maybe because I was smaller.”

The show opened with a 20 minute set from Brooklyn rapper DonMonique. Between performing songs like “Chrome Heater” and “Pilates,” the rapper made sure to represent the borough of BK, by rapping along to classic tunes from Notorious B.I.G. and Lil Kim.

Santigold took to the stage around 9:30, beginning her set with old favorites “You’ll Find a Way” and “L.E.S. Artistes” from her self-titled 2008 album. The crowd, who ranged from fresh-faced tweens to middle-aged men, sang along to every word; at one point during her set, Santigold remarked on how many people in the audience were long standing fans.

Throughout her set, a pair of dancers maintained a stoic appearance as they performed minimalist dance moves behind art deco sunglasses that never came off. Their props included blow-up furniture, shopping carts, yellow plastic signs that read “We Buy Gold” and bags of Cheetos. The many costume changes between Santigold, the dancers, and her band was another highlight of the night.

The set included popular tracks from 2012’s Master of My Own Make Believe – including “Freak Like Me,” “Go!” and “Disparate Youth” – as well as the 2016 release 99 Cents. Before performing “Creator,” Santigold invited fans to dance with her on stage.

Santigold wrapped up her set with “Can’t Get Enough of Myself” but returned to the stage to cap off the night with a rousing performance of “Big Mouth.”

Check out photos of the show in the gallery below.