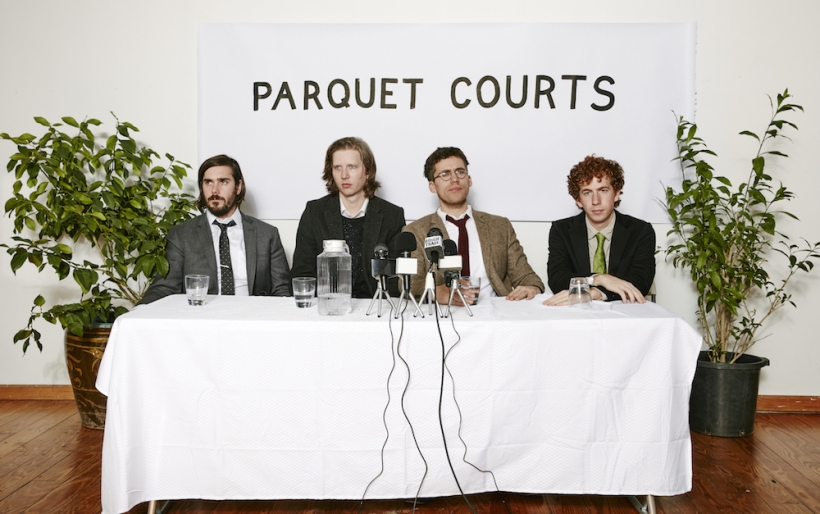 Parquet Courts | Photo by Ben Rayner | courtesy of the artist

Parquet Courts kinda keep you guessing.They may be the most fascinating and distinctive rock band to emerge this decade.But it’s frustratingly hard to parse exactly what they’re up to.Are their many quirks (linguistic, aesthetic, compositional, vocal) ingenious idiosyncrasies or insufferable affectations?Are they slackers or stoners or hipsters or goofballs?Art-punk philosopher-poets or sardonic, smirking smart-asses? All of the above, possibly.Or maybe they’re just some thoughtful dudes with well-thumbed post-punk collections and a knack for obliquely infectious guitar riffs.

Even after seeing them live about five times – always a blast, though it can be unclear whether the band are really having much fun – I’m still hard-pressed to say how I feel about them.It’s complicated.But Human Performance, their third or fifth album depending how you see things, does a lot to tip the scales.It’s their most tuneful, approachable outing yet, lifting the lid – if only a tad – on their inscrutabilities while broadening their stylistic scope; not so much a simple maturation or softening as a conscious, confident outward expansion.

While the band’s habitual nervy agitation and angularity are amply represented, some of the album’s finest moments find them at their unprecedented poppiest (the downright jaunty “Berlin Got Blurry”) and/or gentlest (the sweet, almost reticent closing waltz “It’s Gonna Happen”); others introduce instruments (mellotron, vibraphone, bongos) that would have been unthinkable just a few years back.Lyrically, they veer from the ultimate banality of self-explanatory opener “Dust” (“sweep!,” they cheerily exhort) to the title track’s heartfelt, confessional relationship post-mortem.

As the album title so shrewdly alludes, the question – perhaps the central, defining tension of the entire Parquet Courts project – remains: how much of their work reflects or represents something about (their) humanity and how much is mere performance, or schtick?(They might well ask: Is there really such a difference?)Either way, rarely have they explored both sides of the equation so openly, with such satisfying results.

Parquet Courts headlines Union Transfer on Wednesday, May 11th. Tickets and more information can be found at the XPN Concert Calendar.