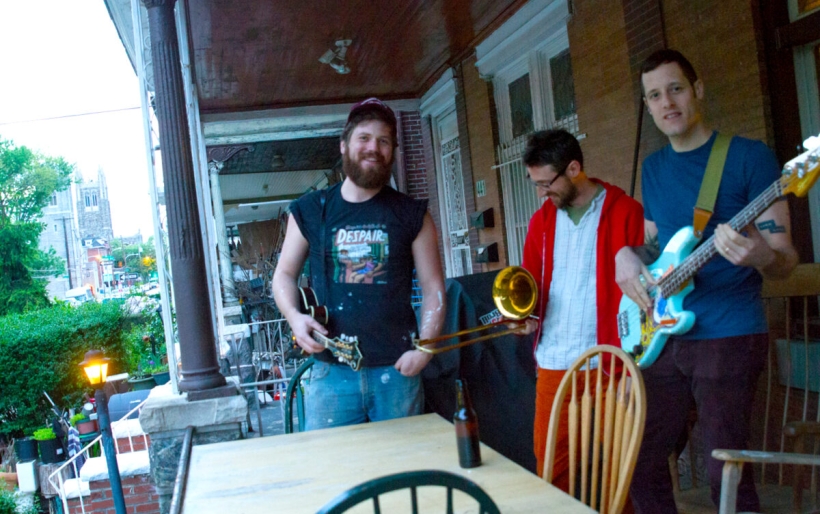 Music for the People: Porchfest takes root in West Philadelphia

His band Driftwood Soldier was touring through New England when he got a message from a promoter in Somerville, Massachusetts. Their show was accidentally double-booked; it was the same day as something called Porchfest and the gig had to be called off. Lyman-Schmidt’s reaction: what the heck is Porchfest?

The promoter assured him that, don’t worry, we can still get you a gig that day as part of the event. And when Driftwood Soldier rolled into to town, what they found took them by surprise.

“It was amazing, we’d never seen anything like it before,” remembers Lyman-Schmidt. “We were just hanging out in the neighborhood beforehand and there were all of these crowds of people walking by. We were like ‘whats going on?’ And everyone was like ‘Don’t you know? It’s Porchfest! Isn’t that why you’re here?'”

The band played a show to a backyard filled with total strangers, people who just showed up because Porchfest was going on. Their reaction was simultaneously bowled away and ambitious. We need to bring this back to West Philly, they thought. We’ve got much better porches. Porchfest comes to West Philadelphia on Saturday, June 4th. The entire event is free, open to the public and spread up and down the Baltimore Avenue corridor.

It’s a neighborhood with a very deep rooted, arts-forward, community-driven mindset, from living room folk concerts to basement punk shows to experimental happenings in garages. But as Lyman-Schmidt says, those different cultural pockets often operate under the radar.

“There’s a strong DIY culture here, but a lot of DIY scenes are by default exclusive,” he says. “Because they’re in unofficial venues that don’t advertise. To get the address for a show you have to privately message someone or email someone.”

As a result, he continues, those shows might be a homogenous crowd, whether it’s a roomful of roots fans or a warehouse full of punk fans. Porchfest is a perfect event to counter that effect, he says, since it brings music out in the open where the concert is accessible to everybody.

The event started in Ithaca in 2007, and a list on the Porchfest central website tallies over 50 participating cities. Lyman-Schmidt’s co-organizers Abe Taber and Ross Hoffman (a contributor to The Key) both had their own unique encounters with it.

Ross attended another Porchfest while living in Massachusetts; he hadn’t played music for a long time, and decided to put together a band just to play the event. “It was just a really fun, low-stakes project,” Hoffman says. “A way to play music together, to put together a set and then have a built-in audience.”

Taber grew up outside of Somerville, and played in a variety of bands that he says were always looking for unique gigs – costumed holiday shows, unconventional instrumental setups. At his first Porchfest, his bandmates retooled their setup to mix portable percussion with upright bass. “Our guitarist ran out into the middle of the street at one point playing a guitar solo, and running in circles,” he recalls, before Lyman-Schmidt jumps in.

“Just to be clear if anyone does that at West Philly Porchfest it is entirely at their own risk,” he laughs. “We take no responsibility for guitar solos in the street.”

The bigger point, however, is that the event takes live music – which is typically cloistered away, even when it’s in a “proper venue” setting – and brings it out in the daylight. Taber describes his post-gig experience in Somerville, saying “I was biking back from the show and I was hearing music all over the place. And it was just really interesting to hear. Like you’re riding down the street and you’re hearing like this funk band in the background and ‘oh, now I’m hearing an acoustic bluegrass thing,’ and ‘oh, now there’s someone rapping on their front porch.’ Just seeing the variety of musicians and acts is really exciting. It really made the city feel alive.” The organizers of West Philly Porchfest – a small team of five that also includes Liana Moskowitz and Bobby Szafranski – are currently rounding up participating porches via the website, westphillyporchfest.com. Hosts register their show, which will put them on the official Porchfest guide map for attendees making their way through the neighborhood on June 4th. The Porchfest Facebook group includes a connector app for porch owners who are looking for musicians, and musicians in search of porches. Community organizations, including Girls Rock Philly, are involved as well, and are slated to present Porchfest shows.

Lyman-Schmidt says the beauty of Porchfest is its ability to use DIY to really represent the diversity of the neighborhood.

“You know, we didn’t invent the idea of bringing music outside,” he says. “There’s jazz in park in Cedar Park, there’s music all the time right outside my front door in Malcolm X Park. There are all sorts of people who play outside in this neighborhood, or who play different types of music in this neighborhood. What we’re really hoping is to not just make this another DIY exclusive scene but something that really represents the genuine diversity of the neighborhood – because that’s one of the things that’s so special about this particular part of Philly.”