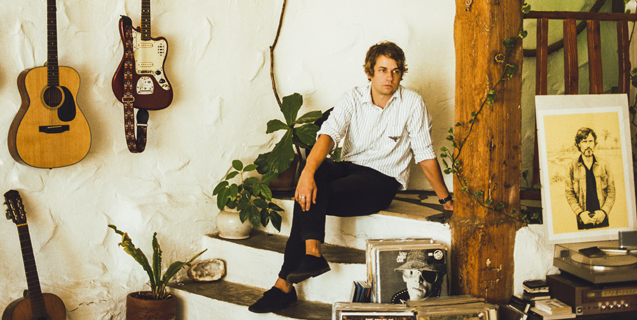 A piano was left behind in the house that Kevin Morby moved into in the Mount Washington neighborhood of Los Angeles in the fall of 2014. He began using it to write new songs, and he may not have realized it at first, but it would play a major role in carving out his latest album, Singing Saw.

Morby’s new tool for writing allowed him to explore a new way of adding layers to his music, rather than just using a piano for texture. It combined with his then new home had afforded him more time and space he needed for writing an album much more lush and thought-out. It’s one that shines a brighter light on the poignant folk singer-songwriter through additional orchestration.

“The piano became this way of introducing this other instrument into song writing,” Morby says while casually sitting in an desk chair in WXPN’s office area less than 36 hours after returning from France on a European tour. “So, if I wrote a song on guitar I suddenly had this way of playing a melody to the guitar part. Until then I never had something that could counter it. [In the past] I’d have this song on guitar and I’d say, ‘Oh, this would sound cool over it.’ But then it also became thing of, ‘Oh, this piano line could be played on horns, or a choir could sing them.’ It was very laboratory-like, I was able to go mad scientist with a lot of time spent alone.”

“I Have Been to the Mountain,” the album’s lead single, employs both a triumphant trumpet section and a choir of ghostly singers, adding layers that hadn’t been heard in such a way on Morby’s prior albums. The trumpet is swapped out for a wandering saxophone, plus the addition of comforting strings make an even more prominent appearance while he is pining for love lost on the heartfelt “Destroyer,” later on the album. It’s the song that Morby realized he’s capable of coming up with a complete piece of music on piano, despite not having any formal piano training.

“That’s a good example because I had a moment where I realized, ‘Wow, I can come up with a song on piano,’” he says. “I think there are only two or three chords in the whole song. If you were someone who knew how to play piano, you wouldn’t write that song.”

Upon relocating to the west coast, Morby had more time to write – in contrast to his last album, Still Life, which felt more rushed to follow up his debut Harlem River, a collection of songs he’d written over a long time. And if the piano had influenced the way Morby wrote and arranged Singing Saw, then bucolic Mt. Washington played a part in its aesthetic. Morby says that Mt. Washington’s forested hills made him deliberately seek out adding the aforementioned layers to Singing Saw. Replacing the chaotic environment of New York City and tour life, where his first two albums had been written, let him take in more of his setting. It’s clear on songs such as the loose, relaxed “Water,” and “Ferris Wheel,” a song one can nearly feel a cool breeze blowing their hair back invoked by the way Morby teases the piano’s keys.

The new mountainous digs are a bit in the realm of an artist’s escape. Morby grew up in the Midwest, but this is the first time in his adult life that he could close a door to separate himself from distraction.

“It’s very dense in that there’s a lot of nature and it’s very beautiful,” he says about Mt. Washington. “But there’s no real temptation to go out, it’s very quiet. And because there’s a lot of space I was able to build something bigger in my head.”

Mt. Washington’s topography makes appearances throughout Singing Saw, too, when Morby and his backing vocalists sing “Got a songbook in my head / I passed the houses so I could put it down,” as if it’s their long-standing mantra on the album’s seething title track. There’s a dark, foreboding feeling throughout the album even in its moments of beauty, which is something Morby had considered right from the start.

But when the song continues and the tension increases as they sing, “Thought I saw a singing saw cutting down a willow / Then I saw the singing saw come swinging after me,” it’s curious of what they’re actually referring to. But when asked, Morby’s okay with sharing the idea behind the destructive imagery.

“It all plays into all that for sure,” he says. “Being slain.”