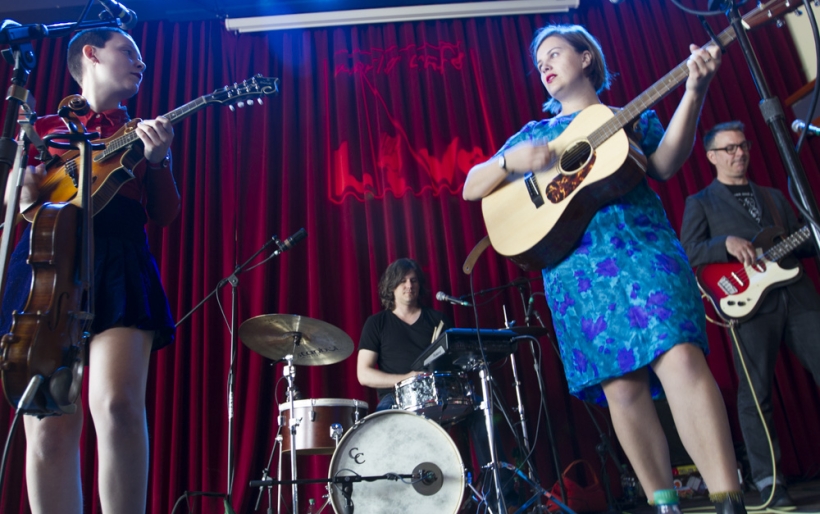 Disaster struck for Oh Pep! during Friday’s Free At Noon.

Olivia Hally, one half of the Australian duo, had broken a guitar string during “Tea, Milk & Honey,” the band’s fifth song of a set that surely had to continue. Hally admitted the dilemma, usually remedied by a spare guitar, could only be fixed by restringing.

“That’s how rock and roll we are,” said Hally, in reference to the fact that she traveled to World Cafe Live with just one six-string.

Considering the concert was broadcast live over the air, no one had time to add another string. So, Hally simply made some tuning adjustments, and ventured on sans a sixth. Sure, being able to finish out the set with that kind of adaptation isn’t quite miraculous, but it speaks to the creative power of Hally and her counterpart Pepita Emmerichs.

As Hally played on, the lead vocalist’s face displayed the humor she found in her previous blunder. She laughingly smiled as she easily conquered “Only Everyone” and the poppy jam “The Race.” What could’ve put an extensive pause on the set ended up being nothing more than a entertaining curveball. Before the broken string, things were going swimmingly for the Melbourne natives. With tunes from their brand new debut LP Stadium Cake, Hally and Emmerichs provided a folk-pop blend that was both dominant and fun. Hally’s emotions rushed out of her mouth as she swarmed the microphone before her. With each word you could feel the heart, especially during the high-pitched hook of “Wanting,” a song that wouldn’t be complete without Emmerichs’ contributions on the mandolin. Although small in stature, Emmerichs’ instrumental work is the bigger part of Oh Pep!’s sound. If not on mandolin, she could pick up the violin and sound just as adept.

After concluding the broadcast portion of the show with Stadium Cake lead single “Doctor Doctor,” Oh Pep!’s drummer and bassist departed the stage to leave behind Hally and Emmerichs. “Afterwards” was the duo’s song of choice — and fittingly so — as Hally remarked that not only is it an encore, but also the final track on the album they worked on for six long years. Over those years, the two had shared the stage with the likes of Lake Street Dive and Lord Huron. But on this Friday afternoon, the stage belonged solely to these two talented women. Oh Pep! took the bow they deserved, capping a performance memorable enough to make everyone forget about the broken-string hiccup of earlier.

Oh Pep! plays World Cafe Live tonight, with doors for the all ages show opening at 7 p.m. Tickets and more information can be found at the XPN Concert Calendar. 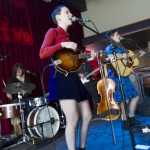 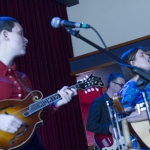 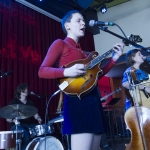 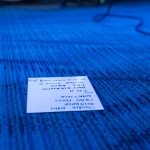 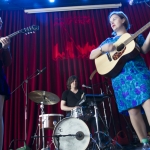 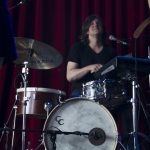 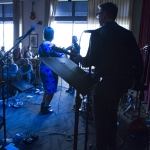 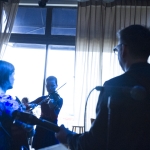