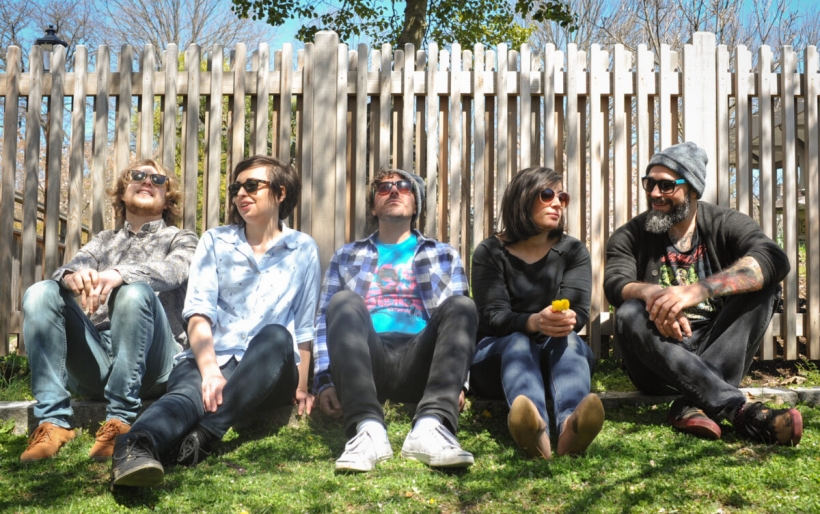 PREMIERE: Listen to VoirVoir’s new album There Are No Good Goodbyes , watch a new video for “I Wanna”

With a heart-on-their-sleeve approach to songwriting and a level of emotional vulnerability that explores our relationships and struggle for self-betterment, indie-rock up-and-comers VoirVoir (pronounced v-wah v-wah) are coming at us from the Bethlehem music scene, which has been exploding with talented artists in recent years. The band’s debut full-length, There Are No Good Goodbyes, drops this Friday on Fleeting Youth Records, but you can stream the album in full right now below.

We heard first single “I Wanna” last month, a vibrant release of pent up energy paired with booming anthem chants that reminds us that having the drive to succeed is half the battle (“You can make it / if you wanna). Now we see how “I Wanna” falls into the broader storylines that make up Goodbyes, an album that has a lot to say and uses many different sounds and styles to do so.

Second track “Make Your Bed” has a distinct rock quality to it that screams Cage The Elephant, with lead singer and guitarist Matt Molchany channeling similar vocal stylings to Cage frontman Matt Shultz. Some guitar distortion gives this track a ’90s alternative feel with punchy lyrics like, “If you want to take this apart / please don’t hesitate / go right for the heart.”

Keyboardist and vocalist April Smith takes on co-vocals on “Be Your Machine” and the contrasting voices of Molchany and Smith work seamlessly to transform the lyrics into a dialogue. It’s a more somber track filled with dream-like soundscapes, a reoccurrence on the LP’s heavier songs.

Smith does an equally beautiful job on vocals on the album’s title-track, a haunting and hard piece that is a distinct standout on the album as it swells up and releases palpable energy.

“This album was Matt and I finding the pretty in everything, even those things that look hopeless and impossible to fix,” Smith said. This, along with the rest of the album’s themes, comes from Smith and Molchany’s experiences as social workers, assisting the sick and mentally ill.

Goodbyes screams to a halt during the final moments of album closer “This Is A Drag,” an aptly named final touch. There’s no sparkly metaphors and allusions to hide behind here — we’re given quite bluntly exactly what this moment in time feels like, and it ain’t good.

At the end of Goodbyes, VoirVoir leaves us raw, refreshed and introspective. Listen to There Are No Good Goodbyes in full below.

The band also released a new music video for wanna, about which Molchany has this to say:

April loves videos that tell a story entirely through imagery and we’re both iffy on appearing in our own music videos.  We’d rather the song and aesthetic be the focus, so we took it upon ourselves to attempt both by twisting and turning hours of vintage Showbiz Pizza footage into those beloved (and sometimes horrifying) characters acting as our animatronic surrogates.  They’re called the Rock-afire Explosion.  They have their own wiki but it’s presented as though they’re a real band.  Maybe they are.  In this video, they really do mirror us and the song as they start off pumped and by the end they’re being dismantled.

Watch the video below. The band has a handful of shows coming up this summer, from a July 28 in-store at Siren Records to a gig at Musikfest in Bethlehem on August 9th. More information can be found at the band’s Facebook page.