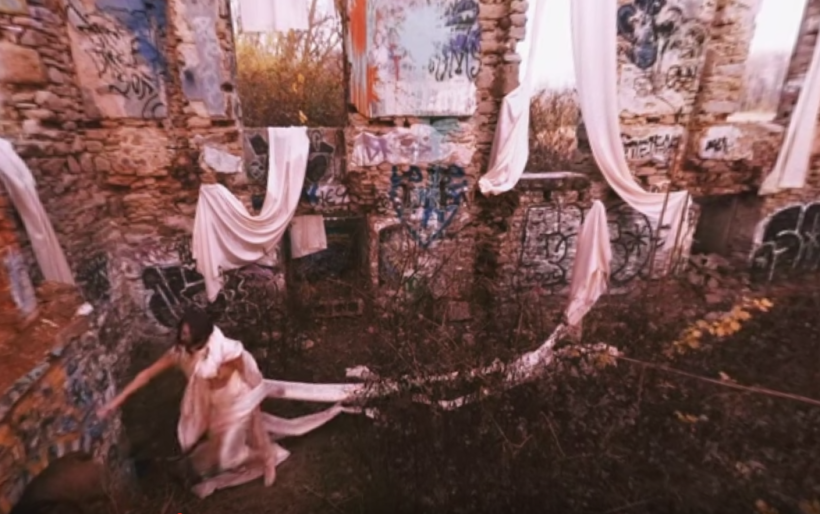 Philly’s own The Lawsuits just released a 360° music video for their song “Wasted,” off the band’s latest LP Moon Son, and I cannot stop spinning around in circles as fast as possible. If you’re unfamiliar, 360° videos allow you to navigate the entire screen using arrows going up, down, left and right, so you’re not locked into a stationary view of the action. In this video, we’re in what looks like an abandoned building, with graffiti coating every wall and weeds and flowers sprouting from the ground. We’re able to explore every aspect of it, tilting the camera down to the floor or raising it up to the sky to examine the building’s interesting architecture.

There’s sheets of linen draped throughout, poking its way through windows and crevices and weaving about the entire property. Cue a beautiful brunette young woman, dressed in the same billowy fabric laced around the room, who is likely the subject of “I’m wasted, Wasted on you, Girl”, found twice in the lyrics of the song. Trying to follow her action, as she moves about the space and at one point falls to the floor in hysterics, is certainly exciting — I occasionally lost her with all the motion but this may have been because she actually left the shot entirely. Regardless, you’ll have a hell of a time traveling through the scene.

And if you’ve got a keen enough eye, you might just catch something peculiar. 52 seconds in if you pan up from watching her roll around on the ground, a man walks onto the window frame, visibly amused. Whether it was a goof or an on purpose easter egg, now I’ll have to re-watch this thing over and over to see if there’s anymore.

The lighthearted, doo-woppy sounds of “Wasted,” are a fun and enchanting backdrop to a girls dreamy midday frolicking, a pairing I would have never thought of but hits it out of the park.

You can catch The Lawsuits performing live at Boot & Saddle on Friday, September 23rd with Nemes and Jeremiah Tall. For more information and tickets, head on over to the XPN Concert Calendar. Have some fun with the new video “Wasted” below.