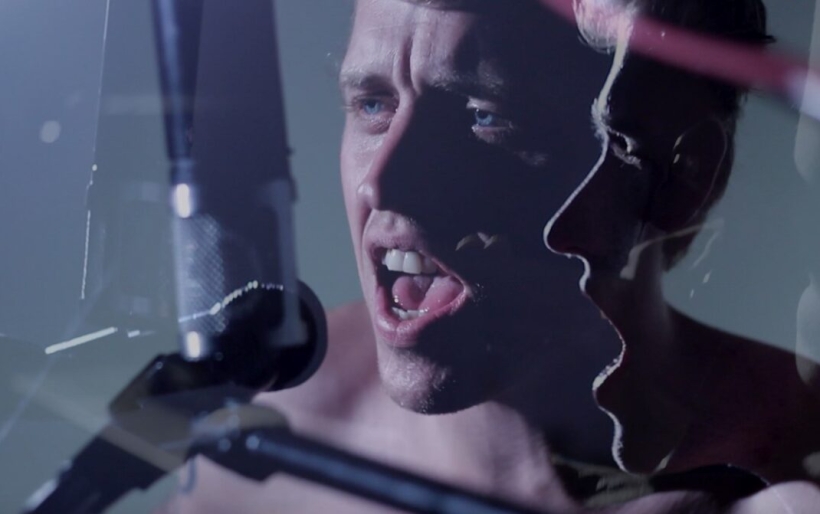 Curtis Cooper | photo by Michelle Goodwin | courtesy of the artist

Stripped down and strikingly human, Philadelphia singer-songwriter Curtis Cooper recounts the tragedies of the past year in his latest music video for “2016.” The simple, darkened bedroom setup features Cooper at its center, electric guitar in hand and pedals at his feet. His face and shirtless body cast in shadows bear witness to his absolute vulnerability in this moment. The lyric “everyday I feel alive / until I breathe,” echoes throughout most of the five minute piece, becoming layered atop other lines and eventually distorted to an incoherent, reduced speed moan that fades out the track.

In response to a succession of deaths within his family and friend group, Cooper put pen to paper to alleviate and express what was happening. Cooper repeatedly chants “I know you’re gonna die,” as he fears the fragility of life.

As he sings, “for a time / friends dropped like flies,” Cooper places the guitar face down on his lap, focusing all the energy and attention in that moment to the devastation of such a lyric. Cooper’s whispers are replaced mid-song with guttural growls, an extension and a sonic representation of the stages of grief. The layered vocals come together as multiple videos of Cooper are stacked together, creating a dizzying display fit to describe the somberness of the subject and the mental anguish screaming from within.

Cooper let us in on the mindset behind the song:

“The song is about experiencing a lot of death, in what feels like a rapid succession. It’s been family and friends, and family of my close friends, it just seems like an inescapable joke. It’s gotten to the point where I wake up and assume someone else close to me has died. If someone misses my call I assume they’re dead, if someone is calling me who I haven’t spoken to in a while, I assume someone else is dead and they’re calling to tell me…. it’s just fucked up.
I was also dealing with a lot of suicidal thoughts in the beginning of the year but I got into a lot of therapy, and brought my family in to help me out and I feel like a new person. Unfortunately, there’s been a lot of other people going through that and not all of them were able to to have found help, and this song is about them as well.”

Cooper has a gig this Friday, August 5th at The Sound Hole, featuring Ganou, A Day Without Love and Emmett Drueding and the Sons of El. You can watch the video for “2016” below.