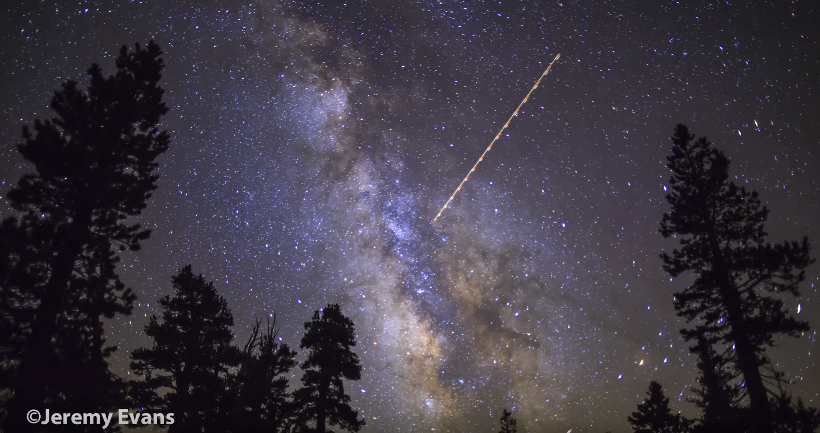 Houston, We Have a Playlist: Two hours of music for the Perseid Meteor Shower this weekend

There was a reason space music was created. It was so you’d have a soundtrack for watching things like the Perseid Meteor shower, the annual storm of light streaking across the sky caused by debris falling off the Swift-Tuttle Comet, discovered back in 1862. This year NASA estimates a whopping 160 to 200 meteor hits an hour, which might be more than a Pink Floyd Laser show! Normally this shower has between 80 and 100 per hour, as seen in the time lapse capture from 2015 below. The best views this year will be Thursday night into Friday morning and Friday night through Saturday morning.

You can’t hear the meteors burning up in the Earth’s atmosphere, but you can create your own soundtrack. Here’s a nearly two-hour playlist to take you through the night skies of the Perseid Meteor show. I tried to avoid some of the obvious choices, Like David Bowie’s “Space Oddity” or “Starman” or even Vangelis’ “Albedo 0.39.” It’s also not all pure space music either.

Meteors are like tear drops in the sky so I though Moby’s “Lacrimae” would be a good place to start and “Have You Seen the Stars Tonight” by the Jefferson Airplane’s Paul Kantner has proved to be surprisingly timeless in its evocation of pastoral space. There’s some apparent choices like Black Mountain’s “Space to Bakersfield,” Beach House’s “Space Song” and Pink Floyd’s “Astronomy Domine”; poetic selections like Miranda Lee Richards’ “Colours So Fine,” (my pick for song of the summer): and some space music classic, cosmic and contemporary from Klaus Schulze, Bluetech and Saul Stokes respectively. Enya’s Dark Sky Island is inspired by a lights-out island in the English Channel that would be perfect for night sky meteor viewing.

So slap on your headphones or turn it up to 11 for the whole neighborhood to hear, and look to the skies when the Perseid Meteor Shower peaks on August 18 and 19. Even if skies are cloudy, which is predicted, you can still watch them on NASA’s UStream channel Thursday through Sunday.