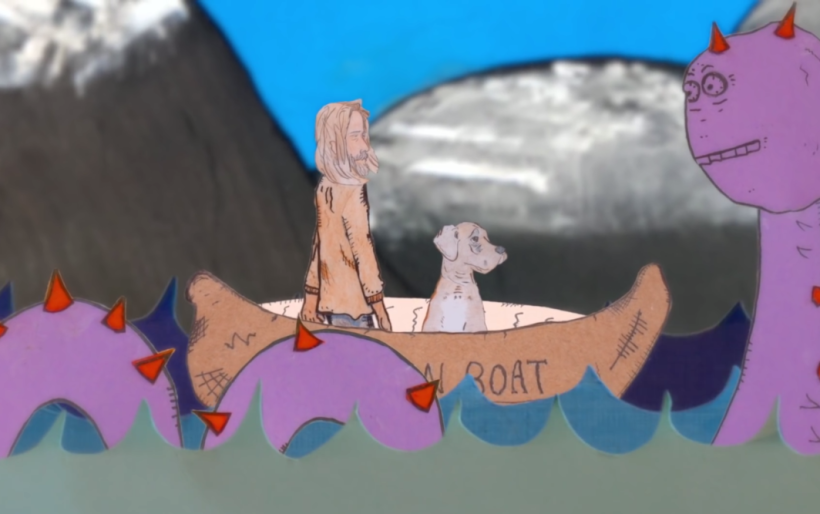 For the creation of their latest video, Former Belle again turned to the visual talents of animator Jon Lewis. The artist created the lonely metropolitan environs that singer/songwriter Bruno Catrambone wandered through in “I Woke Up In Chicago” earlier this year, and now he’s illlustrated a fresh-aired wilderness setting for “A Beautiful One.”

In the clip, a paper Catrambone cutout explores a mountainous region with his trusty canine BFF by his side. The pair encounter the magic of a butterfly breaking through its cocoon, take an aquatic sojourn aboard the Foreign Boat, and meet a local purple sea creature.

When the video premiered on Never Enough Notes earlier this week, Catrambone wrote:

“I knew I wanted to work with Jon Lewis on another animated video – I adored the little world he created for the ‘I Woke Up in Chicago’ video and I’m grateful he was into the idea of continuing the concept into a video for this song. I wanted a video and storyline that didn’t necessarily point toward a lost love or another broken-hearted sad boy (even though that’s always the world that seems to weigh heavy on my shoulders), but something that let the song unfold around a boy and his closest best friend existing together alongside natural events that are seemingly beautiful, scary and out of their control.”

Watch the clip below.